As a lieutenant in the US Marine Corps Michael Stuart was once considered an officer and a gentleman. But that’s all changed. Now he’s seen as a renegade, a traitor and a thief.

Stuart is a man without a country … and perhaps without a prayer. Why? Because in a daring plot to foil the Japanese puppet regime in China, he set out to reinstate the country’s true emperor. Known now as The Red Dragon, Stuart is a soldier of fortune in war-torn Manchuria—and a man of honor in a world of treachery.

Stuart’s latest adventure takes him from Peking to the Great Wall and beyond. He’s in a race against time and against the Japanese super-spy known as the Hell-Cat, both of them in hot pursuit of an elusive black chest. For Stuart, the ultimate prize is one filled with mystery, power, and treasure—not only in the chest itself, but in the love of the beautiful woman who has sent him on this mission.

“Hubbard delivers a tidy finale that shows why he was one of the most popular genre writers of his generation.” –Publishers Weekly 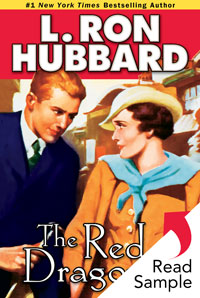 It was on L. Ron Hubbard’s second journey to East Asia that he met British Secret Service agent, Major Ian MacBean, who introduced him to “The Great Game,” the geopolitical tug-of-war between China, Japan, and Britain. Mr. Hubbard also learned of the trade in stolen Chinese treasures, and was exposed to the secret criminal society known as The Red Dragon—inspiring this story of the same name. He has captured a singular time in this storied land.

Aigun: a town in northern Manchuria, situated on the Amur River.

Amur River: the world’s ninth longest river that forms the border between northeastern China (Manchuria) and the Russian Far East (between Siberia and the Pacific Ocean). It was an area of conflict during the war between China and Japan that began in 1937, and eventually led to World War II in the Pacific.

anvil chorus: in reference to a piece of music, “The Troubadour,” by Italian composer Giuseppe Verdi (1813–1901), that depicts Spanish gypsies striking their anvils at dawn and singing the praises of hard work, good wine and their gypsy women.

Canton: city and port in the southern part of China, northwest of Hong Kong.

Cossacks: members of a people of southern European Russia and adjacent parts of Asia, noted as cavalrymen especially during tzarist times. The Cossacks, known for their horses and horsemanship, were considered to be unequaled anywhere on Earth. In 1892, a troupe of Cossack daredevil riders joined the Buffalo Bill’s Wild West show, traveling to London and then to America in 1893. Intrigued by the Cossacks’ trick riding and stunts on their galloping horses, the Western cowboys soon introduced variations to American rodeo.

Cossack saddle: a saddle design that consists of two crosstrees in tandem (the wooden pieces at the front and rear of the saddle that form the pommel or saddle horn and cantle), with a leather pillow buckled down between them. The strap across the pillow is the secret of a Cossack’s ability to ride standing up. He hooks his toes through the belt and the possibility of falling off is slight.

dragnet: a systematic and coordinated search for a wanted person.

embrasure: 1. an opening in a thick wall for a portal or window, especially one with angled sides, so that the opening is larger on the inside than the outside. From the Old French embraser for “to cut at a slant.” 2. the low segment of the alternating high and low segments of a battlement along the outer top of a wall or tower, through which weapons may be fired.

General Chang: Chang Hsüeh-liang (1901–2001); nicknamed “Young Marshal,” he became the military governor of Manchuria after the assassination of his father, a major warlord of China, by the Japanese in 1928. He was made vice commander in chief of all Chinese forces and a member of the central political council. He made historic contributions to ending the ten-year (1927–1937) civil war, helping realize the cooperation between the Nationalist regime and the Communist Party of China, and making the whole nation take part in the war of resistance against Japanese aggression.

Gulliver in Brobdingnag: refers to a satire, Gulliver’s Travels, by Jonathan Swift, in 1726. Lemuel Gulliver, an Englishman, travels to exotic lands, including Lilliput (where the people are six inches tall), Brobdingnag (where the people are seventy feet tall), and the land of the Houyhnhnms (where horses are the intelligent beings, and humans, called Yahoos, are mute brutes of labor).

Harbin: the capital and largest city of Heilongjiang Province, in northeastern China.

high binders: killers belonging to secret criminal organizations that controlled the gambling and slave-girl rackets. The origin of the term “high binders” is generally conceded to lie in the assassin’s custom of binding his hair tightly around the top of his head, under his hat, so that the police could not catch him by the pigtail.

Hotel du Pekin: in the 1930s it was considered one of the finest hotels in the Orient. Built in 1917, the hotel had 200 rooms with baths, a tea hall with nightly dancing and its own orchestra for classical dinner music. It also had a spacious roof garden overlooking the Forbidden City and the Legation Quarter (walled city within the city exclusively for foreigners).

ideograph: a graphic symbol that represents an idea, rather than a group of letters arranged according to a spoken language, as in Chinese or Japanese characters.

Jehol: a former province in northeast China; traditionally the gateway to Mongolia, Jehol was the name used in the 1920s and 1930s for the Chinese province north of the Great Wall, west of Manchuria and east of Mongolia. It was seized by the Japanese in early 1933, and was annexed to Manchukuo and not restored to China until the end of World War II.

Legation Street: also known as the Legation Quarter; it was encircled by a wall and was a city within Peking exclusively for foreigners. It housed eleven foreign embassies and was off-limits to Chinese residents.

looie: lieutenant of the armed forces.

Manchukuo: a former state of eastern Asia in Manchuria and eastern Inner Mongolia. In 1932 it was established as a puppet state (a country that is nominally independent, but in reality is under the control of another power) after the Japanese invaded Manchuria in 1931. It was returned to the Chinese government in 1945.

Morrison Street: street in Peking named after Australian George Morrison (1862–1920), a journalist and political advisor to the Chinese government. The street was the center for commercial activities.

Nanking: city in eastern China, on the Yangtze River. Now called Nanjing, it is the capital of Jiangsu Province.

Nankou: a city located northeast of Peking, near the Great Wall.

Percheron: a breed of powerful, rugged draft horses, originating in northern France, that are noted for their heavy muscles.

Port Arthur: a Chinese seaport surrounded by ocean on three sides. It was named after a British Royal Navy lieutenant who, during a war in 1860, towed his crippled ship into the harbor for repairs. The Russians and other Western powers then adopted the British name.

postern: a small gate or entrance.

Punch and Judy: characters of the Punch and Judy puppet show, a famous English comedy dating back to the seventeenth century, by way of France from Italy. It is performed using hand puppets in a tent-style puppet theater with a cloth backdrop and board in front. The puppeteer introduces the puppets from beneath the board so that they are essentially popping up to the stage area of the theater.

rest on his oars: to cease to make an effort.

Tartar: a member of any of the various tribes, chiefly Mongolian and Turkish, who, originally under the leadership of Genghis Khan, overran Asia and much of eastern Europe in the Middle Ages. Also a member of the descendants of these people.

Vladivostok: city and major port in southeastern Russia, on Golden Horn Bay, an inlet of the Sea of Japan. It is the last city on the eastern end of the Trans-Siberian Railway.

Western Hills: a range of hills in China, situated northwest of Peking, which contains structures from the Ming and Qing dynasties and has forests of pine and fir trees. The range is known for its many temples and has long been a religious retreat. It also serves as a retreat for Chinese scholars and members of the government and civil service.