Somebody has killed Chinook Shannon’s grandfather and wants to steal the family ranch. Chinook’s got exactly twenty-four hours to find the killer and become the Cattle King.

Forged in the hot sun and sand of the Arizona desert, Chinook Shannon is as tough as they come. But Chinook is far from home—in the north country of Montana—and facing a challenge as big as the territory itself.

Following his grandfather’s suspicious death, he’s come to Montana to claim his inheritance—the family’s cattle ranch. But the territory’s crawling with bandits and bankers, and they all want a piece of Chinook’s land.

With foreclosure hanging over the ranch, Chinook’s got exactly twenty-four hours to find out who killed his grandfather and become the Cattle King. He’ll follow a trail of forgery, cattle rustling, and murder to find the truth, knowing he has only one ally—his Colt Peacemaker.

Also includes the Western adventure “Come and Get It,” the story of an Easterner who comes to Wyoming to find out who killed his father—but discovers that the only way to get justice is to cook up a new identity for himself.

Treat yourself to a royal good time as Cattle King for a Day carries you away to the north country of the Wild West. 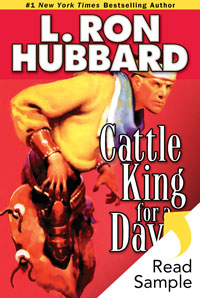 L. Ron Hubbard’s detailed knowledge of ranch life and mining techniques—as well as the economics and legal issues surrounding mining and water rights—informs Cattle King for a Day. He wrote: “I became thoroughly acclimated to Montana ranch life and the very rough and tough atmosphere.… It was also a mining area, and I used to pan in these streams for pocket money.” It’s no wonder, then, that these stories are pure gold.

Cattle King for a Day Glossary

applehorn: style of saddle so named from the small horn whose top was round like an apple, compared to the broad, flat horns of saddles it replaced.

bead on, take a: to take careful aim at. This term alludes to the bead, a small metal knob on a firearm used as a front sight.

belly robber: a name often given to the cook, especially if he was a poor one.

bonnet strings: buckskin thongs hanging from each side of the brim of a cowman’s hat at its inner edges. The ends are run through a bead or ring, and by pulling these up under the chin, the cowboy has a hat that will stay on during a fast ride or windy weather.

cayuse: used by the northern cowboy in referring to any horse. At first the term was used for the Western horse to set it apart from a horse brought overland from the East. Later the name was applied as a term of contempt to any scrubby, undersized horse. Named after the Cayuse Indian tribe.

chuck wagon: a mess wagon of the cow country. It is usually made by fitting, at the back end of an ordinary farm wagon, a large box that contains shelves and has a hinged lid fitted with legs that serves as a table when lowered. The chuck wagon is a cowboy’s home on the range, where he keeps his bedroll and dry clothes, gets his food and has a warm fire.

circuit court: a court that moves from place to place within a particular judicial district.

concentrate: the desired mineral that is left after impurities have been removed from mined ore.

coulee: a deep ravine or gulch, usually dry, that has been formed by running water.

crosstrees: on a pack saddle, the crossed pieces of wood connected to the front and back parts of the saddle. Crosstrees were used to distribute the pressure and load more evenly upon the animal, providing greater comfort.

cyanide mining: a highly toxic method of extracting gold and other metals from raw ore. Cyanide is applied to the ore, where it bonds with microscopic flecks of gold which are then recovered from the cyanide solution.

diamond hitch: a hitch is a kind of knot used to fasten one thing temporarily to another. The diamond hitch is a common method of roping a pack on an animal. It keeps the cargo from moving in any direction by holding it on the animal’s back and when completed, the rope forms the figure of a diamond on top of the pack.

double-bitted ax: an ax that has cutting edges on both sides of the head.

drew rein: from “draw in the reins,” meaning to slow down or stop by exerting pressure on the reins.

drifts: horizontal (or nearly horizontal) passageways in a mine.

false-front: describes a façade falsifying the size, finish or importance of a building.

feeder: from “feeder line,” a branch of a main transportation line, as of a railroad.

Henry: the first rifle to use a cartridge with a metallic casing rather than the undependable, self-contained powder, ball and primer of previous rifles. It was named after B. Tyler Henry, who designed the rifle and the cartridge.

hog leg: another name for the popular Colt revolver also known as the Peacemaker.

hostler: a person who takes care of horses, especially at an inn.

jingle bobs: little pear-shaped pendants hanging loosely from the end of a spur (small spiked wheel attached to the heel of a rider’s boot); their sole function is to make music.

lode: a deposit of ore that fills a fissure in a rock, or a vein of ore deposited between layers of rock.

Peacemaker: nickname for the single-action (that is, cocked by hand for each shot), six-shot Army model revolver first produced in 1873 by the Colt Firearms Company, the armory founded by Samuel Colt (1814–1862). The handgun of the Old West, it became the instrument of both lawmaker and lawbreaker during the last twenty-five years of the nineteenth century. It soon earned various names, such as “hog leg,” “Equalizer,” and “Judge Colt and his jury of six.”

pinwheel: a movement or trick with a gun; the gun is held in virtual firing position except that the forefinger is not in the trigger guard. The gun is flipped into the air so that it revolves and the butt drops naturally into the palm of the hand.

quartz: a common, hard mineral, often with brilliant crystals. It is generally found in large masses or veins, and mined for its gold content.

raked: slanted away from an upright position.

ramrod: a rod used for ramming down the charge in a gun that is loaded through the muzzle.

rein in: stop or slow one’s horse by pulling on the reins.

scatter-gun: a cowboy’s name for a shotgun.

single-action Army: Colt Single Action Army (SAA); a single-action, .45-caliber revolver holding six rounds. It was first manufactured in 1873 by the Colt Firearms Company, the armory founded by Samuel Colt (1814–1862). Initially produced for the Army to incorporate the latest metallic-cartridge technology, civilian versions were also made available in .32-, .38-, .41- and .44-calibers, among many others. The SAA, also referred to simply as Colt or the Peacemaker, gained popularity throughout the West and has become known as the “cowboy’s gun.”

Sioux shield: a shield of the Sioux (Indian people of North America). The shield was used for physical and spiritual protection. It was circular in shape and approximately eighteen inches in diameter.

sluice: sluice box; a long, narrow wood or metal artificial channel that water passes through when put in a creek or stream to separate the dirt and junk material away from the gold. Gold, a very dense metal, stays in the sluice box because of its heavy weight.

sougans: bedrolls; blankets or quilts with a protective canvas tarp for use on a bunk or on the range.

sowbelly: salt pork; pork cured in salt, especially fatty pork from the back, side or belly of a hog.

tongue: the pole extending from a carriage or other vehicle between the animals drawing it.

Wellington boots: a boot worn and popularized by Arthur Wellesley, First Duke of Wellington and fashionable among the British aristocracy in the early nineteenth century. The First Duke had instructed his London shoemaker to modify the eighteenth-century Hessian boot (the standard issue footwear for the military, especially officers). The resulting new boot designed in soft calfskin leather had the trim removed and was cut closer around the leg. The heels were low cut, stacked around an inch, and the boot stopped at mid-calf.

whitewash: a white liquid that is a mixture of lime or powdered chalk and water, used for making walls or ceilings white.

wind devil: a spinning column of air that moves across the landscape and picks up loose dust. It looks like a miniature tornado but is not as powerful.