Navy Lieutenant Steve Craig’s accused of murdering his own father. Determined to find out who took his father’s life—even if it means risking his own—Steve follows a trail of sudden violence and astonishing secrets that will change his life forever.

US Navy Lieutenant Steve Craig is in one hell of a mess. Being accused of murder is bad enough, but the local police are convinced he’s killed his own father. And now, for Steve Craig, the plot is about to get down and dirty.

Steve’s safe from the cops as long as he stays aboard his Navy ship—but the word safe isn’t in his vocabulary. He slips off the vessel and vanishes into the seamy underside of the city, determined to find out who took his father’s life … even if it means risking his own.

He follows a trail of smoke and mirrors and sudden violence to the Brass Keys to Murder. With them, Steve will seek to unlock the terrible truth behind his father’s death … and an astonishing secret that will change his life—and that of the woman he loves—forever. 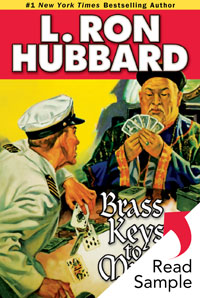 L. Ron Hubbard knew well the life at sea and the world surrounding it. Not only was he the son of a naval officer, but he also traveled back and forth across the Pacific, plied the China coast in a working schooner, and commanded an expedition aboard a four-masted ship to the Caribbean. He walked the waterfronts of countless ports, sharing stories with the colorful—and often shady—characters inhabiting them. Originally published in April 1935 under the pen name Michael Keith, Brass Keys to Murder is a direct result of those adventures.

Binnacle: a built-in housing for a ship’s compass. Used here as the name of a flophouse.

bucko: 1. a person who is domineering and bullying. 2. young fellow; chap; young companion.

cargo boom: a long pole extending upward at an angle from the mast used to load and unload goods.

carronades: short cast-iron cannons. With their low muzzle velocity, their round shot was intended to create many deadly wooden splinters when hitting the structure of an enemy vessel, leading to the nickname “the smasher.”

cleats: strips of wood, iron or other material fastened across something to give strength, hold in position or furnish a grip.

doffed chapeaus: removal of one’s hat; following the rules of etiquette regarding the wearing of hats and when one should remove them.

Guantánamo: Guantánamo Bay Naval Base at the southeastern end of Cuba. It has been used by the United States Navy since 1898 and is the oldest overseas US Navy base.

Gulf of Chihli: the innermost gulf of the Yellow Sea on the coast of northeastern China. Its proximity to Beijing, the capital of China, makes it one of the busiest seaways in the world.

Horn, the: Cape Horn; the southern tip of South America. The passage around Cape Horn is one of the most hazardous shipping routes in the world, however, the use of this route was greatly reduced by the opening of the Panama Canal in 1914. It is commonly known to sailors simply as the Horn.

inboard: within the hull or toward the center of a vessel.

Judge Advocate General or JAG: senior legal advisor to a branch of the military.

keelhauled: a severe form of corporal punishment meted out to sailors at sea. The sailor was tied to a rope that looped beneath the vessel, thrown overboard on one side of the ship and dragged under the ship’s keel to the other side. As the hull was often covered with barnacles and other marine growth, this could result in lacerations and other injuries.

letters of mark and reprisal: a license to a private citizen to seize property of another nation.

lit out: left in a hurry.

outs, been on the: been estranged from another person; been unfriendly or on bad terms with.

privateersman: an armed ship that is privately owned and manned, commissioned by a government to fight or harass enemy ships.

ratlines: small ropes fastened horizontally between the shrouds in the rigging of a sailing ship to form ladder rungs for the crew going aloft.

scuttle: to sink a ship by making holes through the bottom.

stem to stern, from: from one end of the ship to the other or through the whole length.

Thames: a river of southern England flowing eastward to a wide estuary on the North Sea. Navigable for large ships as far as London, it is the principal commercial waterway of the country.

thirty-eight or .38: Police Positive .38; a .38-caliber revolver developed by the Colt Firearms Company in answer to a demand for a more powerful version of the .32-caliber Police Positive. First introduced in 1905, these guns were sold to many US police forces and European military units, as well as being made available to the general public.

West Indies rum: rum made by the West Indies Rum Distillery Limited. Established in 1893 by the Stades brothers, its primary purpose was to export rum to their homeland of Germany. Introducing the first still to the Caribbean, they were pioneers in scientific rum making.