American Dusty Colton flees the French Foreign Legion only to rush headlong into a Berber tribal lair. Despite his long odds of solo escape, he can’t leave a captive American woman behind and must find a way for both of them to outrun the Berber tribe and the Foreign Legion.

American Ann Halliday is as fiery as the Sahara sun. And now she’s feeling some real heat, as the prize captive of the Berber leader Abd el Malek also known as “The Killer.”

But Abd el Malek wants Ann alive—and in chains—subject to his every whim and fantasy. Dusty Colton, however, an American deserter from the French Foreign Legion, has a different idea and he’s determined to give “The Killer” a taste of his own bloody medicine. The only problem is Dusty himself is wanted for murder.

Can Ann and Dusty team up and turn evil on its head? One thing’s for sure—between Ann and the Hell’s Legionnaire, the temperature is about to get even hotter.

Also includes the adventure stories, “The Barbarians,” in which a Legionnaire sets out to avenge a savage killing and makes a stunning discovery; and “The Squad That Never Came Back,” the story of a man who has uncovered the secret to a city of gold—a secret that could turn into a death sentence. 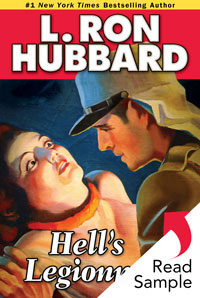 On the subject of North Africa, L. Ron Hubbard said that writers too often “forget a great deal of the languorous quality which made The Arabian Nights so pleasing. Jewels, beautiful women, towering cities filled with mysterious shadows, sultans equally handy with robes of honor and the beheading sword.” Mr. Hubbard brings this unique insight to his stories of North Africa and the Legionnaires, investing them with an authenticity of time, place and character that will keep you asking for more.

alidade: a topographic surveying and mapping instrument used for determining directions, consisting of a telescope and attached parts.

azimuth: in artillery, the angle of deviation of a projectile or bomb from a known direction, such as north or south.

burnoose: a long hooded cloak worn by some Arabs.

cafard: (French) a mood of madness and suicidal depression that commonly afflicted Legionnaires.

Caudron: airplane made by the Caudron Airplane Company, a French aircraft company founded in 1909 by Gaston (1882–1915) and René (1884–1959) Caudron. It was one of the earliest aircraft manufacturers in France and produced planes for the military in both World War I and World War II.

Chauchat: a light machine gun used mainly by the French Army. It was among the first light machine-gun designs of the early 1900s. It set a precedent for twentieth-century firearm projects as it could be built inexpensively in very large numbers.

Foreign Legion: French Foreign Legion; a unique elite unit within the French Army established in 1831. It was created as a unit for foreign volunteers and was primarily used to protect and expand the French colonial empire during the nineteenth century, but has also taken part in all of France’s wars with other European powers. It is known to be an elite military unit whose training focuses not only on traditional military skills, but also on the building of a strong esprit de corps amongst members. As its men come from different countries with different cultures, this is a widely accepted solution to strengthen them enough to work as a team. Training is often not only physically hard with brutal training methods, but also extremely stressful with high rates of desertion.

houris: in Muslim belief, any of the dark-eyed virgins of perfect beauty believed to live with the blessed in Paradise.

Jebel Druses: Jebel is Arabic for mountain. The Druse (also Druze) are members of a tightly organized, independent religious sect dwelling in the Jebel Druze State, a region in southern Syria named after the Jabal el Druze mountain and formerly part of the Turkish Empire. They have been known to be strong fighting people.

kohl: a cosmetic preparation used especially in the Middle East to darken the rims of the eyelids.

Lawrence: Lieutenant Colonel Thomas Edward Lawrence, also known as T. E. Lawrence. A British Army officer renowned especially for his liaison role during the Arab Revolt against the Ottoman Turkish rule of 1916-18. Extraordinary breadth and variety of his activities and associations, and his ability to describe them vividly in writing, earned him international fame as Lawrence of Arabia, a title which was used for the 1962 film based on his World War I activities. Lawrence’s major written work is Seven Pillars of Wisdom. In addition to being a memoir of his war experiences, certain parts also serve as essays on military strategy, Arabian culture and geography.

Legion: French Foreign Legion, a specialized military unit of the French Army, consisting of volunteers of all nationalities assigned to military operations and duties outside France.

Makhzan: (Arabic) the privileged people from whom the Moroccan state officials are recruited.

Mannlicher: a type of rifle equipped with a manually operated sliding bolt that loads cartridges for firing. Ferdinand Mannlicher, an Austrian engineer and armaments designer, created rifles that were considered reasonably strong and accurate.

Moorish barb: a desert horse of a breed introduced by the Moors (Muslim people of mixed Berber and Arab descent) that resembles the Arabian horse and is known for speed and endurance.

Mt. Tizi-n-Tamjurt: the highest elevation in the Atlas Mountain range.

prop wash: the disturbed mass of air pushed aft by the propeller of an aircraft.

Riffs: members of any of several Berber peoples inhabiting the Er Rif, a hilly region along the coast of northern Morocco. The Berber people of the area remained fiercely independent until they were subdued by French and Spanish forces (1925–1926).

Sidi-bel-Abbès: the capital of the Sidi-bel-Abbès province in northwestern Algeria. The city was developed around a French camp built in 1843. From 1931 until 1961, the city was the “holy city” or spiritual home of the French Foreign Legion, the location of its basic training camp and the headquarters of its first foreign regiment.

sou: (French) a French coin worth a very small amount.

Zephyrs: penal battalions for the French Foreign Legion; nickname given in Algeria to a corps that is recruited from the French Army, those who would not conform to discipline or who were criminals. This punishment, no matter its length, does not count in the term of military duty which the state requires.