Lieutenant Bill Reilly has been banished to the “suicide section” of the Foreign Legion and sent to incite war between the Spanish and local Berber tribesmen so the French can invade a weakened Morocco. Everything goes as planned until his superiors change their strategy and leave Reilly caught in the middle with no way out.

Running off to join the French Foreign Legion used to be every boy’s dream of action and adventure. But for Lieutenant Bill Reilly—half Irish, half American—the dream has turned into a nightmare. And it all begins with the gruesome delivery of a severed hand.

The dead, gnarled fingers hold a message from the Berber chief Abd el-Ulad. He challenges the courage of the Legion soldiers and says he holds an American woman captive—who, if Reilly doesn’t come to her rescue, is next up for dismemberment. Reilly abandons his post guarding the trains and goes after her.

But it’s all a trick. In his absence, the railroad falls victim to a terrorist attack. But who set the trap and engineered the sabotage? Reilly is caught in a triangle of treachery as the French, Spanish and native Berbers vie for control. His fate—as well as that of the American woman—rests on his ability to escape a spider’s web of double- and triple-crosses and uncover the truth in a desert of deception. 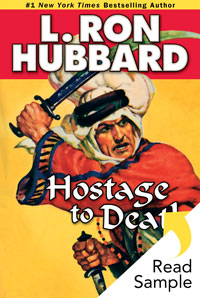 L. Ron Hubbard’s knowledge of the Berber raiders as well as of the Arab culture was comprehensive. As a young man, he traveled extensively, following and studying numerous nomadic cultures and tribes. Combining those insights with his experience operating everything from machine guns to field telephones in the Montana National Guard and Marine Corps Reserves, Mr. Hubbard brought unique authenticity to his tales of the Foreign Legion. His stories were so exceptional, he was sought after by the premier writers’ magazines of the time to write how-to articles—two of which appeared the same month that Hostage to Death was published.

bled: a prairie or treeless plain in northern Africa; countryside.

cacolets: (French) horse or mule litters for the transport of wounded.

call to colors: the ceremony of hoisting the national flag at 8:00 AM and of lowering it at sunset, the sounding of a bugle being part of each ceremony.

Chasseurs Alpins: (French) Alpine Hunters or Alpine Chasers; the mountain infantry and an elite unit of the French Army. They are trained to operate in mountainous terrain and in urban warfare.

hobnail: a short nail with a thick head used to increase the durability of a boot sole.

horns of Ramadan: the horns blown each morning during Ramadan, a sacred month in the Islamic faith.

Hudson Bay: a large inland sea in the northeast of Canada. On the east it is connected with the Atlantic Ocean and on the north with the Arctic Ocean.

Irish Guard: a military unit in the French Army composed of Irish exiles. It was formed in 1690 and for one hundred years served the French Army. In battle they won glory and highest honors for themselves and Ireland and the undying respect of friend and foe. When the Irish Guard was dissolved they were presented with a special flag from the French government bearing the Irish Harp embroidered with shamrocks and fleurs-de-lis and touted with honors for their service to France.

kamik: (Eskimo) a knee-high waterproof boot with a hard sole, made of sealskin.

Lee-Enfield: a standard bolt-action magazine-fed repeating rifle; the British Army’s standard rifle for over sixty years from 1895 until 1956, although it remained in British service well into the early 1960s and is still found in service in the armed forces of some Commonwealth nations.

Mauser: a bolt-action rifle made by Mauser, a German arms manufacturer. These rifles have been made since the 1870s.

Meknes: a city in northern Morocco.

Melilla: a Spanish enclave (a country or part of a country mostly surrounded by or wholly lying within the boundaries of another country) on the Mediterranean Rif coast of North Africa, neighboring Morocco.

old, my: used as a term of cordiality and familiarity.

route step: a normal pace in marching in which it is not necessary to march in step. Used mainly in the field when moving from place to place as a unit.

Senegalese: people of Senegal, on the western coast of Africa. Senegal was awarded to France in 1815 by the Treaty of Paris and became a French colony in 1895 as part of French West Africa, with full independence being won in 1960.

sīdī: (Arabic) 1. an African Muslim holding a high position under a king. 2. used as a title of respect; sir; master.

Sidi-bel-Abbès: the capital of the Sidi-bel-Abbès province in northwestern Algeria. The city was developed around a French camp built in 1843. From 1931 until 1961, the city was the “holy city” or spiritual home of the French Foreign Legion, the location of its basic training camp and the headquarters of its first foreign regiment.

St. Cyr: a community in the western suburbs of Paris, France. It used to host the training school for officers of the French Army.

Vega: the fifth brightest of all stars and the third brightest in the northern sky.

Yukon Territory: the westernmost of Canada’s three territories, it is positioned in the northwest corner, bordering Alaska. Yukon is known as “the land of the midnight sun” because for three months in summer, sunlight is almost continuous. In winter, however, darkness sets in and the light of day is not seen for a quarter of the year.

Zephyrs: penal battalions for the French Foreign Legion; nickname given in Algeria to a corps that is recruited from the French Army, those who would not conform to discipline or who were criminals. This punishment, no matter its length, does not count in the term of military duty which the state requires.