Bill Murphy’s more than a match for everything the oil business can throw at him. Everything except for Marcia Stewart who is convinced he killed her father. Murphy’s drilling down for the truth, and it’s his land, his love for Marcia—and his life—that are on the line.

Drilling for oil is a dirty business, and for Bill Murphy, it’s about to turn positively filthy. But Murphy’s as big and tough as his home state of Texas and he’s more than a match for everything the oil-rich land of Venezuela can throw at him. Everything, that is, except for one woman.…

Her name is Marcia Stewart. She’s fiery, she’s brave, and she’s beautiful … and she’d like nothing better than to see Bill Murphy dead. Her oilman father’s been killed, and Marcia tags Murphy as the murderer.

Murphy’s guilty of a lot of things, but murder’s not one of them. He’s drilling down for the truth, and now it’s his land, his love for Marcia—and his life—that are on the line. With so much at stake, he’ll go to any length to come out on top of the Black Towers to Danger. 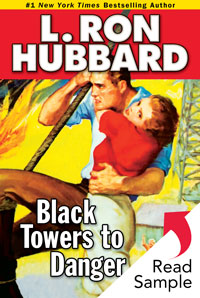 When Black Towers to Danger was first published in 1936, the editor wrote: “L. Ron Hubbard, as you know, is a pilot, a writer and an engineer. He was in China at 15 and has covered a lot of territory since then. If he’s on a flying field—or anywhere else—you can’t miss him—he’s a tall, slender chap with very fair skin and bright red hair. Something picturesque about him as there should be about a flyer.” And not only was he a man with a commanding presence, so too did he have command over his material, researching the entire oil drilling process for this story.

The Stories from the Golden Age series reflect the words and expressions used in the 1930s and 1940s, adding unique flavor and authenticity to the tales. While a character’s speech may often reflect regional origins, it also can convey attitudes common in the day. So that readers can better grasp such cultural and historical terms, uncommon words or expressions of the era, the following glossary has been provided.

Anvil Chorus: in reference to a piece of music, “The Troubadour,” by Italian composer Giuseppe Verdi (1813–1901), that depicts Spanish gypsies striking their anvils at dawn and singing the praises of hard work, good wine and their gypsy women.

bolívars: (Spanish) coins and the monetary unit of Venezuela.

Celebes Sea: a section of the western Pacific Ocean between the Indonesian island of Sulawesi (formerly known as Celebes), Borneo and the southern Philippines.

concession: a grant extended by a government to permit a company to explore for and produce oil, gas or mineral resources within a strictly defined geographic area, typically beneath government-owned lands. The grant is usually awarded to a company in consideration for some type of bonus or license fee and royalty or production sharing provided to the host government for a specified period of time.

coup de grâce: (French) “blow of mercy”; a death blow intended to end the suffering of a wounded creature. It is often used figuratively to describe the last of a series of events that brings about the end of some entity.

derrick: oil derrick; the towerlike framework over an oil well or the like.

grandee: a nobleman of the highest rank in Spain or Portugal.

gusher: an oil well from which oil spouts without being pumped.

guy-wire: a tensioned cable designed to add stability to tall, narrow structures. One end of the cable is attached to the structure and the other is anchored to the ground at a set distance from the structure’s base.

jipijapa: (Spanish) a stemless palmlike plant of Central and South America, having long-stalked, fanlike leaves that are used to make hats. They are named after Jipijapa, a city of western Ecuador. A hat made from this is also called a Panama, Montecristi or simply straw hat.

Lake Maracaibo: an inlet of the Caribbean Sea in northwestern Venezuela. The largest natural lake in South America, it occupies an area of 5,130 square miles.

Maracaibo: the second largest city in Venezuela after the national capital. It is nicknamed “the land loved by the sun.”

Navy Colt: the name of a line of revolvers originally produced by Samuel Colt (1814–1862). In order to attract Navy contracts, Colt used the expression Navy to indicate .36 caliber rather than the .44 caliber required by the Army.

pipe-clayed: made clean and smart; pipe clay is a fine white clay used in whitening leather. It was at one time largely used by soldiers for making their gloves, accouterments and clothes look clean and smart.

prove: to establish, by drilling, trenching or other means, that a given deposit of a valuable substance exists and that its grade and dimensions equal or exceed some specified amounts.

seep: a spot where water or petroleum trickles out of the ground to form a pool.

Siberia: an extensive region in what is now the Russian Federation in northern Asia, extending from the Ural Mountains to the Pacific.

Sonora: a state in northwestern Mexico.

Spanish Inquisition: the Inquisition in Spain, under state control from 1480 to 1834, marked by the extreme severity and cruelty of its proceedings in the sixteenth century.

spirit gum: a theatrical adhesive to apply wigs, beards and things of that nature.

sulfur candle: a candle used for fumigating and killing pests and fungal organisms.

Tengo una carta, señor: (Spanish) I have a letter, mister.

thirty-thirty or .30-30: Winchester model 1894 rifle that is chambered to fire a .30-30 cartridge, the first North American sporting cartridge designed for use with smokeless powder. The .30-30 is a .30-caliber cartridge that was originally loaded with 30 grains of the new smokeless powder, which is the source of its name.

Union Square: (also known as Union Square Park) an important and historic intersection in New York City. It was the site of a very large Communist demonstration in 1930 and has been home to the Communist Party’s national headquarters. It was sometimes known as “Red Square” because Communist activists addressed crowds there.