A Matter of Matter trade paperback

Meet Chuck Lambert who is guilty of letting his imagination get the best of his wits. Enter an unsavory real estate swindler of a galactic economy: he sells unwary customers a planet where they can’t sit down because there’s something the matter with its matter.

When it comes to big dreams and schemes, Chuck’s biggest dream of all is really out of this world. Because he’s got his eyes on a prize in the sky. Chuck wants to buy a planet of his own.…

Madman Murphy, the King of Planetary Realtors, is more than happy to oblige. He’s got a whole galaxy of planets for sale. All Chuck needs is money … and a lot of it. Eleven years later, saving every penny he can scrape up, Chuck’s dream comes true. He takes possession and takes off for Planet 19453X.

One problem: Madman Murphy has sold Chuck a world of trouble. Because on Planet 19453X the water is undrinkable, the air is unbreathable, and the laws of physics don’t apply. Has Chuck’s dream turned into a nightmare? Not quite. As he’s about to discover, sometimes, to fulfill your true desire, it’s simply a matter of digging a little deeper.…

Also includes the science fiction adventures, “The Conroy Diary,” in which the man who opens up the universe to mankind also opens himself to charges of fraud and tax evasion; “The Obsolete Weapon,” the story of an American GI involved in the 1943 invasion of Italy who slips back in time and finds himself fighting a different kind of battle—as a gladiator in ancient Rome; and “The Planet Makers,” in which a great deal is at stake for the engineers who make planets habitable, but one of them has a surprising plan all his own.

“This is a real corker, pulp fiction at its most entertaining.” —Booklist 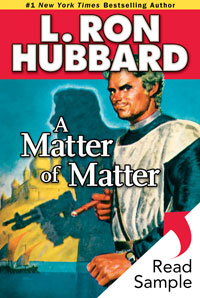 By the time A Matter of Matter appeared in 1949, L. Ron Hubbard’s stature as a writer was well established. As author and critic Robert Silverberg puts it: he had become a “master of the art of narrative.” Mr. Hubbard’s editors urged him to apply his gift for succinct characterization, original plot, deft pacing, and imaginative action to the genre of science fiction and fantasy. The rest is Sci-Fi history.

A Matter of Matter Glossary

alihipidile: made-up name for an animal.

anguis in herba: (Latin) a snake in the grass; a treacherous or harmful thing that is hidden or seemingly harmless.

aqua vitae: (Latin) literally “water of life”; used in current English to mean a strong distilled alcohol, especially a strong liquor such as whiskey or brandy.

Assyria: an ancient empire and civilization of western Asia, at its height between the ninth and seventh centuries BC. The empire extended from the Mediterranean Sea across the Middle East.

auto-blinded: to have made oneself unable to notice or understand something.

bellowing: expanding to draw air in and compressing to force the air out.

cat: Caterpillar bulldozer; a heavy engineering vehicle used to push large quantities of soil, sand, rubble, etc., during construction work. It is made by Caterpillar, Inc., and commonly referred to simply as cat.

Colosseum: an ancient amphitheatre in Rome.

crap: a losing throw in the game of craps, where players wager money against the outcome of one roll, or a series of rolls, of two dice.

dark star: a theoretical star whose gravity is strong enough to trap light; mostly superseded by the concept of “black hole.”

dint of, by: by vigorous and persistent means.

docks: any of various weedy plants that have broad leaves and clusters of small greenish or reddish flowers.

done me dirt: treated me unfairly or reprehensibly.

flashboards: boards fitted at the top of a dam to add to its height and increase the amount of water that can be held back.

flying squads: trained, mobile groups of police officers capable of moving quickly into action and performing specialized tasks, as during an emergency.

Franco-Prussian War: (1870–1871) the war between France and Prussia. The conflict was a culmination of years of tension between the two powers, which finally came to a head over the issue of a candidate for the vacant Spanish throne following the deposition of the Queen of Spain. The French had equipped their infantry with the Chassepot, a breech-loading rifle with a maximum effective range of some 750 yards and a rapid reload time. Made famous as the arm of the French forces in this war, the Chassepots were responsible for most of the Prussian and other German casualties during the conflict.

G-2: United States Army Intelligence (a branch of the Army).

goon: a professional gangster whose work is beating up or terrorizing people.

Graf Zeppelin: a large dirigible named after the German pioneer of airships, Ferdinand von Zeppelin. It flew for the first time on September 18, 1928 and was the largest airship at that time at 776 feet (262.5 meters) in length.

Here’s how: used as a toast.

hole card: the card dealt face down in the first round of a deal in stud poker.

leaded ports: portholes with glass impregnated with a small amount of lead to impede radiation.

link pin: a thin rod that fastens together separate sections of a tread.

magnetrons: devices that generate high-frequency electromagnetic waves, as for use in radar applications.

Mercator: a type of high-quality world map shown on a flat surface that can be used for accurate navigation.

mix words: variant of “mince words”; to restrain oneself in a conversation and say less than one wants to, out of fear of offending the listener.

net-and-trident: a pair of weapons used by gladiators consisting of a net and a three-pronged spear.

Nubians: people from Nubia, a region in southern Egypt and northern Sudan and a former kingdom from 2000 bc–1400 ad.

out at elbows: in financial straits; short of funds.

Palatine Hill: one of seven hills in Rome; the central hill of the seven on which Rome was built, considered the oldest and the site of many of the imperial palaces.

palisades: stakes pointed at the top and set firmly in the ground in a close row with others to form a defense.

phalanx: especially in ancient Greece, a group of soldiers that attacks in close formation, protected by their overlapping shields and projecting spears.

radized: having caused (metal) to absorb doses of radiation.

Riot Act: an English statute of 1715 providing that if twelve or more persons assemble unlawfully and riotously, to the disturbance of the public peace, and refuse to disperse upon proclamation, they shall be considered guilty of a felony.

Roman holiday: a violent public spectacle or disturbance in which shame, degradation or physical harm is intentionally inflicted on one person or group by another or others. It comes from the bloody gladiatorial contests staged as entertainment for the ancient Romans.

Roman Legionnaires: members of the Roman army that was the basic military unit of ancient Rome. The Roman Legionnaires were the best equipped soldiers in the world, with helmets and armor that covered more than seventy percent of their bodies. They also carried a heavy body shield, two types of swords and a spear. They were well protected and their equipment was heavy, but still possessing considerable freedom of movement and lighter than the rest of the armies at the time.

shacking up: living or dwelling (in homes).

shooter: a person who sets off explosives in oil-drilling operations.

skunked: cheated by someone.

stiffen your resolution: to strengthen or make firm one’s determination to do something or to carry out a purpose.

straw boss: a worker who also supervises a small work crew, acting as an assistant to the foreman.

stud poker: a game of poker in which the first round of cards is dealt face down, and the others face up.

Styx: (Greek mythology) river of Hades; the river across which the souls of the dead were ferried into the underworld.

Tenth Legion: one of the legions used by Julius Caesar in 58 BC for his invasion of Gaul, an ancient European region.

Treasury Department: an executive department of the US federal government that administers the treasury of the US government. The Internal Revenue Service (IRS) is the largest of the Treasury’s bureaus. It is responsible for determining, assessing and collecting internal revenue in the US.

vestal virgins: (Roman mythology) virgin priestesses who tended the sacred fire in the temple of Vesta, goddess of the hearth.

visograph: a tool utilized for displaying still or moving images.

white: a white-colored chip having the lowest value, chiefly used in poker.

your queen bets: in stud poker, statement made by the dealer indicating who bets first. In this form of poker, the player with the highest card dealt in that round bets first.