Man-Killers of the Air trade paperback

Smoke Burnham’s betting his life that he can fly his plane, Super Comet—with his pet cheetah Patty—across the mountains and jungles of South America to a prize-winning payday.

There’s not a dare Smoke won’t take, and there’s not a wager he won’t make. Now he’s betting his life that he can fly his plane, Super Comet—with his pet cheetah Patty coming along for the ride—across the mountains and jungles of South America to a prize-winning payday.

All he has to do is out-race the competition, out-maneuver a saboteur, and make out with his girl—who’s determined to bring him down to earth. One thing you can count on—in the air, in a fight, or in his girlfriend’s arms—he’s a man who likes to turn up the heat. Because where there’s Smoke, there’s fire.

“A deft musical score with well-chosen sound effects create an audio movie from one of Hubbard’s most entertaining adventure stories.” —AudioFile magazine 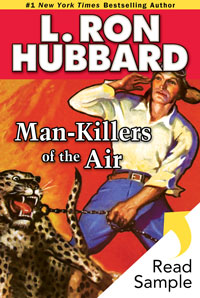 In 1931, as a student at George Washington University, L. Ron Hubbard founded the college Glider Club and within a few months a respected columnist said “he is recognized as one of the outstanding glider pilots in the country.” Later he wrote as the aviation correspondent for the prestigious flying magazine Sportsman Pilot. His combined writing and flying expertise comprised the perfect recipe to give stories like Man-Killers of the Air their authentic flavor.

Man-Killers of the Air Glossary

Bolling: Bolling Field; located in southwest Washington, DC and officially opened in 1918, it was named in honor of the first high-ranking air service officer killed in World War I. Bolling served as a research and testing ground for new aviation equipment and its first mission provided aerial defense of the capital.

camphor: a tough, gummy, volatile, aromatic crystalline compound obtained especially from the wood and bark of the camphor tree.

cheetah: also called a hunting leopard. A long-legged, swift-running wild cat of Africa and southwest Asia, having tawny, black-spotted fur and nonretractile claws. The cheetah is the fastest animal on land and can run short distances at about sixty miles (ninety-six km) per hour.

cutaway: a man’s formal daytime coat, with front edges sloping diagonally from the waist and forming tails at the back.

fins: fixed vertical surfaces at the tail of an aircraft that give stability, and to which the rudders are attached.

foil: airfoil; any surface (such as a wing, propeller blade or rudder) designed to aid in lifting, directing or controlling an aircraft by using the current of air it moves through.

Gullivers in Brobdingnag: refers to a satire, Gulliver’s Travels, by Jonathan Swift in 1726. Lemuel Gulliver, an Englishman, travels to exotic lands, including Lilliput (where the people are six inches tall), Brobdingnag (where the people are seventy feet tall), and the land of the Houyhnhnms (where horses are the intelligent beings, and humans, called Yahoos, are mute brutes of labor).

hunting leopard: another name for cheetah.

jaguar: a large wildcat of Central and South America, closely related to the leopard and having a tawny coat spotted with black rosettes. One of many spotted cats, a jaguar may be mistaken for a leopard or cheetah.

Lindbergh Field: now San Diego Airport; opened in 1928, the airport was named after Charles Lindbergh, since San Diego had the honor of being the city where he began the journey that would ultimately become the first solo transatlantic flight. It was also the first federally certified airfield to serve all aircraft types, including seaplanes. It gained international airport status in 1934.

Messerschmitt: a famous German aircraft manufacturer known primarily for its World War II fighter aircraft. In 1927, Willy Messerschmitt joined the company, then known as Bavarian Aircraft Works, as chief designer. He promoted a new lightweight design in which many separate parts were merged into a single reinforced firewall, thereby saving weight and improving performance. The Messerschmitt became a favorite of the German government and in 1938 the company was renamed with Willy Messerschmitt as chairman.

morning coats: men’s jackets, usually black, cut away at the front below the waist and with a long divided tail, worn on formal occasions as part of morning dress.

Mount Tupungato: a mountain of 22,310 feet (6,804 meters), in the Andes on the Chile-Argentina border east of Santiago, Chile.

Nine: Nine Sports; a two-seater sports car produced in Coventry, England from 1932 to 1937. They were a nine-horsepower range of cars, thus giving them the name Nine, and could reach a speed of over sixty-six miles per hour with the windscreen lowered flat.

Pan Am: Pan American World Airways, the principal international airline of the United States from the 1930s until it closed its operations in 1991. Originally founded as a seaplane service out of Florida, the airline became a major company credited with many innovations that shaped the international airline industry.

Potomac: a river in the east central United States; it begins in the Appalachian Mountains in West Virginia and flows eastward to the Chesapeake Bay, forming the boundary between Maryland and Virginia.

Prussian: in the manner of a military officer from Prussia. Prussia, a former northern European nation, based much of its rule on armed might, stressing rigid military discipline and maintaining one of the most strictly drilled armies in the world.

pylon: a tower marking a turning point in a race among aircraft.

QT, on the: on the quiet; secretly.

Rio Solimões: the name often given to early stretches of the Amazon River.

rod: a measure of length; a rod is sixteen and a half feet.

rumble: rumble seat; an upholstered exterior seat in the back of a car with a hinged lid that opens to form the back of the seat when in use.

shylock: a hard-hearted banker or lender who is concerned only with profit.

snap rolled: (of an aircraft) quickly rolled about its longitudinal axis while flying horizontally.

spats: cloth or leather covers that fit on the top of men’s shoes, extending up over the ankles and fastening under the shoes with a strap.

swagger coat: a woman’s pyramid-shaped coat with a full flared back and usually raglan sleeves (sleeves extending to the collar of a garment instead of ending at the shoulder), first popularized in the 1930s.

Teuton: a native of Germany or a person of German origin.

toe the mark: to behave properly.

yellow journalism: journalism that exploits, distorts or exaggerates the news to create sensations and attract readers.