Easygoing Easy Bill Gates is forced to defend his ranch from land baron George Barton, who will stop at nothing to take his spread—including hiring the filthiest, fastest gunmen that money can buy.

Some men look to keep the peace. Others look to make trouble. But sometimes even the most law-abiding of men are compelled to cross the line.…

Easy Bill Gates is just such a man—quick with a smile and as slow to anger. He’s a model of restraint … until he’s forced to strap on a holster and kill the outlaw who murdered his brother. But more than his honor is at stake. A ruthless land baron is out to grab Bill’s ranch and he’s hired a gang of gunslingers to get Bill out of the way.

Between the rancher who wants to take his land and the young guns who want to take his life, Easy Bill will have to make some hard choices—and fast draws—to avoid becoming just another notch in the Gunman’s Tally.

Also includes the Western adventure, “Ruin at Rio Piedras,” the story of a young cowboy kicked off a ranch for falling in love with the owner’s daughter … only to devise a whip-smart plan to win the day—and the girl. 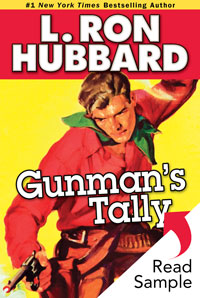 Hailing from the western states of Nebraska, Oklahoma, and Montana, L. Ron Hubbard grew up surrounded by grizzled frontiersmen and leather-tough cowboys, counting a Native American medicine man as one of his closest friends. When he chose to write stories of the Old West, Hubbard didn’t have to go far to do his research, drawing on his own memories of a youth steeped in the life and legends of the American frontier.

alkali: a powdery white mineral that salts the ground in many low places in the West. It whitens the ground where water has risen to the surface and gone back down.

ballistics expert: one who specializes in firearms. Ballistics experts are trained in and responsible for the processing of crime scenes of ballistic-related evidence: examining firearms and tool marks. Every firearm has its own particular characteristics that are carried over onto the cartridge case and the bullet during the firing process, and a ballistics expert can match a bullet that has been fired to the firearm that was used.

barrel tan: to change an animal hide into leather by soaking in a barrel containing a tanning solution.

beeves: plural of beef, an adult cow, steer or bull raised for its meat.

brand artist: a rustler, one expert at changing brands.

buckboard: an open four-wheeled horse-drawn carriage with the seat or seats mounted on a flexible board between the front and rear axles.

buscadero belt: a broad belt for two guns, one on either side.

chinks: short leather chaps (leggings), usually fringed and stopping just below the knee, worn over the pants for protection.

dynamo: a machine by which mechanical energy is changed into electrical energy; a generator.

fanning: 1. waving or slapping the hat against a horse’s sides while riding a bucker. Using the hat in this manner serves as a balance and when a rider loses his hat, he is usually not long in following it to the ground. 2. firing a series of shots (from a single-action revolver) by holding the trigger back and successively striking the hammer to the rear with the free hand.

green-gilled: green around the gills; to be pale or sickly in appearance from nervousness or from being frightened.

jingle bobs: little pear-shaped pendants hanging loosely from the end of a spur (small spiked wheel attached to the heel of a rider’s boot); their sole function is to make music.

line camp: an outpost cabin, tent or dugout that serves as a base of operations where line riders are housed. Line riders are cowboys that follow a ranch’s fences or boundaries and maintain order along the borders of a cattleman’s property, such as looking after stock, etc.

lobo: 1. gray wolf. 2. wolf; one who is regarded as predatory, greedy and fierce.

scatter-gun: a cowboy’s name for a shotgun.

Sharps: any of several models of firearms devised by Christian Sharps and produced by the Sharps Rifle Company until 1881. The most popular Sharps were “Old Reliable,” the cavalry carbine, and the heavy-caliber, single-shot buffalo-hunting rifle. Because of its low muzzle velocity, this gun was said to “fire today, kill tomorrow.”

slouch hat: a wide-brimmed felt hat with a chinstrap.

Stetson: as the most popular broad-brimmed hat in the West, it became the generic name for hat. John B. Stetson was a master hat maker and founder of the company that has been making Stetsons since 1865. Not only can the Stetson stand up to a terrific amount of beating, the cowboy’s hat has more different uses than any other garment he wears. It keeps the sun out of the eyes and off the neck; it serves as an umbrella; it makes a great fan, which sometimes is needed when building a fire or shunting cattle about; the brim serves as a cup to water oneself, or as a bucket to water the horse or put out the fire.

string: a group of animals, especially saddle horses, owned or used by one person.

vaquero: (Spanish) a cowboy or herdsman.

varmints: those people who are obnoxious or make trouble.

war bag: war sack; a cowboy’s bag for his personal possessions, plunder, cartridges, etc. Often made of canvas but sometimes just a flour or grain sack and usually tied behind the saddle.

wind devil: a spinning column of air that moves across the landscape and picks up loose dust. It looks like a miniature tornado but is not as powerful.

wrangler: a cowboy who takes care of the saddle horses.