If I Were You trade paperback

Circus midget Little Tom Little learns from a book on black magic how to switch bodies. When he jumps into the body of the lion tamer, he finds himself caught in the center ring surrounded by dozens of savage cats and quickly realizes that his craving for height just may have led him to a gruesome death.

Tom may be king of the midgets, but he’s got far grander ambitions—to become the muscleman at the top, the ringmaster. Now, drawing on some dark ancient secrets and mystic texts, he’s about to get his wish.

Assuming another man’s identity, Tom discovers he must also take on his sins, debts, and enemies. He may be living large—but now there are those who want to make him pay for the big man’s sins. 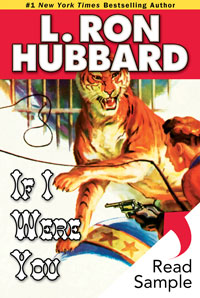 Throughout his young life, L. Ron Hubbard was fascinated and intrigued by mysticism and magic. From an old Blackfoot Indian medicine man in Montana to the last living magician descendant of Kublai Khan in China, from the Chamorro natives of Guam to voodoo displays in Haiti, he absorbed information and insight wherever he could—putting it all to marvelous use in stories like this.

If I Were You Glossary

bale ring: in a large tent, the canvas is perforated by holes where the support poles will be. Each hole is fitted with a sturdy metal ring, which is a bale ring. The poles are placed in the rings as the canvas lies on the ground and the rings are raised up the poles by ropes using block and tackle.

bale ring to stakes: everything and everybody; the whole circus.

billiken: a doll created in 1908 that had elf-like pointed ears, a mischievous smile and a tuft of hair on its pointed head. It was a symbol of good luck. Named after its manufacturer, the Billiken Company of Chicago.

bime-by: by and by; eventually.

Black Forest: a wooded mountain range in southwestern Germany. It is known for its highlands, scenery and woods, and in early times it was impenetrable. The Black Forest region is blessed with a particularly rich mythological landscape. It is said to be haunted by werewolves, sorcerers, witches, the devil in differing guises and helpful dwarves who try to balance the scales.

Borneo: the third largest island in the world, located in southeastern Asia.

Brobdingnagian: of or relating to a gigantic person or thing; comes from the book Gulliver’s Travels of 1726 by Jonathan Swift, wherein Gulliver meets the huge inhabitants of Brobdingnag. It is now used in reference to anything huge.

Chamorro: a people inhabiting the Mariana Islands; also the language of these people.

chumps: suckers; people who are gullible and easy to take advantage of.

coconuts, string of: money, especially a large number of bills.

Colossus of Rhodes: a giant statue of the Greek sun god Helios, known by the Romans as the god Apollo. Considered one of the Seven Wonders of the World, the statue stood at the entrance to the harbor of Rhodes, a Greek island, for approximately fifty-five years. It was built in 280 BC to commemorate the island’s survival of a year-long siege. Made of bronze and stone with reinforcements of iron inside, the Colossus measured about 120 feet in height. It is sometimes said to have straddled the harbor so that ships sailing in and out went under its legs and is depicted in one account as shielding its eyes from the sun with one hand.

de facto: exercising power or serving a function without being legally or officially established.

dogfish: a small bottom-dwelling shark with a long tail.

fagots: bundles of sticks, twigs or branches bound together and used as fuel, a torch, etc.

governor: the head of the show.

hackman: the driver of a hack or taxi.

hawsers: cables or ropes used in mooring or towing ships.

high traps: trapezes high in the air or the people who work them.

high wire: a tightwire act high in the air, or the performer on it.

hoople: ring; the circle in which circus acts are presented. The center ring is about forty-two feet in diameter. It is heavily made, as it is where most of the animal acts perform, and it has to be strong enough for the horses to walk on.

horse piano: calliope; a musical instrument consisting of a series of steam whistles played like an organ. Mounted on a horse-drawn wagon, it is part of the circus parade. It is typically very loud and produces sound that can travel for miles.

howdy: howdah; a seat on the back of an elephant or camel.

John Law: an officer of the law.

Juggernaut car: a large forty-five-foot-tall, multi-ton chariot used in India during annual Hindu processions in honor of Krishna, also called Jagannatha (meaning “Lord of the Universe”). Devotees have sometimes been crushed accidentally as the massive car slipped out of control. Many have also been killed in the resulting stampedes. The sight has led to the use of the word juggernaut to refer to other instances of unstoppable, crushing forces.

kick ’em: kickoff parade; the making of a street parade to bring people in to see the circus. Developed in the mid-nineteenth century, the circus paraded through the streets to announce its arrival and to drum up business in the community. Such parades featured marching elephants, caged lions and tigers in circus wagons, clowns, etc.

kife: the act of bilking the locals of their money; swindle.

lot lice: local townspeople who arrive early to watch the unloading of the circus and stay late.

mestiza: a woman of mixed native and foreign ancestry.

pad room: room near the animals where pads, harness and tack for the elephants and horses are kept. It is not really a dressing room, though most of the animal people congregate there and might put their wardrobe there for the kickoff parade.

pony: a unit of measure for liquor; a glass or the amount of liquor it will hold, usually one ounce (29.6 ml).

Prussian drill sergeant: a drill sergeant from Prussia. Prussia, a former northern European nation, based much of its rule on armed might, stressing rigid military discipline and maintaining one of the most strictly drilled armies in the world.

Punchinello: a comic character; Italian puppet character and probably the source of Punch, the chief male character of the Punch and Judy puppet show, dating back to the seventeenth century. He is the cruel and boastful husband of nagging wife Judy and the language is often coarse and satirical.

red light: a car; in the circus, this term is used when circus workers go to collect their pay and all they see are the red taillights of the employer’s car receding in the distance as he drives away with all the payroll.

ringmaster: the circus Master of Ceremonies and main announcer. Originally, he stood in the center of the ring and paced the horses for the riding acts, keeping the horses running smoothly while performers did their tricks on the horses’ backs.

rubbering: rubbernecking; gawking or gaping; twisting or craning one’s neck as if it were made of rubber in eager curiosity to see something.

shill: the cohort of a dishonest gambler; a circus employee who poses as a customer, plays a game (and is secretly allowed to win), or stands in line to make the box office look busy and motivate other customers to buy a ticket for the show.

slip artist: escape artist; a performer who entertains by escaping from confinement. Some of the performer’s tricks are accomplished by illusionists’ techniques.

spec: spectacle; the opening procession of a circus; a colorful pageant within the tent of all performers and animals in costume, usually at the beginning of the show. Used figuratively.

square-cube law: the way to calculate how much the surface area of an object changes as you scale its size up or down. This mathematical law states that the volume of an object (the size of the three-dimensional space occupied by the object) will change by the cube of the scale, while the surface area will change by the square of the scale; i.e., if a 2″ square block is made twice as big (2 x 2), the surface area of the block will be four times as big, but the volume, and therefore the weight, will be eight times as much (2 x 2 x 2). If one kept increasing the block in this way, it would eventually collapse under its own weight. Conversely, if an object’s size is halved, its structural strength (surface area) will be one-fourth of what it was, while its volume, and therefore its weight, will be only one-eighth of what it was. So, proportionally, it would be stronger.

stock: a kind of stiff, wide band or scarf for the neck.

swallow-tailed coat: a man’s fitted coat, cut away over the hips and descending in a pair of tapering skirts behind. It is usually black and worn as part of full evening dress.

white wagon: the circus main office on the lot.