One Was Stubborn trade paperback

Old Shellback’s the most stubborn man in the universe: he’s simply unwilling to watch the universe crumble and vanish, the product of an alleged agreement among the living to think it away. When Shellback won’t budge, he throws a wrench into the works.

Things are disappearing. Parts of buildings, parts of people, parts of the whole world—they’re here today, gone tomorrow. Old Shellback thinks he needs glasses. But all he really has to do is open his eyes … and see the light.

Or so says George Smiley—otherwise known as the Messiah. George claims that the reason things are vanishing is because he wants them to go away. He has no more use for the world … and so it goes. Say goodbye. But Old Shellback has a different idea, and since he is the most stubborn man in the universe, you might want to hear him out.

What’s Shellback’s idea? That two can play at this game. While George is making this world disappear, Old Shellback will make another one appear. Join him on an amazing odyssey—as he heads back to a future of his own making.

Also includes the Science Fiction adventures: “A Can of Vacuum,” in which a practical joke on a space station proves that a good sense of humor is timeless; and “240,000 Miles Straight Up,” the thrilling story of a race to the moon … and the one man who may be able to save the earth from Armageddon. 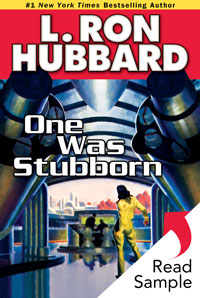 One Was Stubborn Glossary

arc light: the light produced by a lamp where electric current flows across the gap between two electrodes.

azimuth compass: a compass with azimuth bearings to indicate direction. Azimuth bearings use all 360° of a compass to indicate direction. The compass is numbered clockwise with north as 0° and then, moving clockwise, due east 90°, due south 180° and due west 270°. So a bearing of 45° would be northeast and a bearing of 225° would be southwest, and so on.

chaw: a wad of chewing tobacco.

Congressional Medal of Honor: the highest military decoration in the United States, presented by the president in the name of Congress, to members of the armed forces for gallantry and bravery beyond the call of duty in action against an enemy.

deep-ended: be in a situation where expertise or experience is required.

full astern: a naval order where the engines are reversed to bring the ship to a stop. Used here to mean “put a stop to.”

Japanese moon: refers to a time of the year when the moon is said to be the brightest and most beautiful, which is celebrated in Japan.

K and D and C rations: military combat food introduced by the United States Army during World War II. K-ration: a field or combat ration designed for minimal preparation, using canned, precooked or freeze-dried foods, powdered beverage mixes and concentrated food bars. K-rations were intended to be used for only two or three days, but soldiers being forced to consume them for weeks at a time led to the ration’s lack of popularity. D-ration: bars of concentrated chocolate combined with other ingredients to provide a high-calorie content (intended as an emergency ration). C-ration: a complete meal in a can, ready to eat, requiring no special preparation or storage.

lucite: a transparent or translucent plastic.

Madrillon: the name of a supper club in Washington, DC that featured Latin music and jazz.

Mussorgsky: reference to the musical scores “Songs and Dances of Death,” written by Modest Mussorgsky (1839–1881), a Russian composer of operas and orchestral works. He strove to achieve a uniquely Russian musical identity, often in deliberate defiance of the established conventions of Western music.

Old Dutch cleanser: a white scouring powder used as a sink, stove and tub cleaner in the 1930s.

school solution: the authoritatively announced policies and practices of a group, such as the military way of doing things.

SECNAV: Secretary of the Navy.

Smythe report: report written at the end of World War II that told the official story of the making of the atomic bomb. Because it discussed what had been top-secret information, the material it represented was, by definition, no longer classified and could therefore be discussed openly.

sotto voce: (Italian) in a low, soft voice so as not to be overheard.

sprites: small or delicately built people who are likened to elves or fairies.

stroboscopic: the illusion of a moving or rotating object being stationery.

toils: an entrapment; something that binds, snares or entangles one.

transit: a surveying instrument surmounted by a telescope that can be rotated completely around its horizontal axis, used for measuring vertical and horizontal angles.

Trotskyite: a supporter of Trotskyism, the political and economic theories of communism as advocated by Leon Trotsky (1879–1940) usually including the principle of worldwide revolution. His politics differed sharply from those of Stalinism and after leading the failed struggle against the policies and rise of Joseph Stalin in the 1920s, Trotsky was expelled from the Communist Party and deported from the Soviet Union. While in exile in Mexico, he was assassinated by a Soviet agent.

Tycho: a prominent crater on the face of the moon about fifty-six miles in diameter.