Pilot David Duane believes in but one cause—his own. Duane heads off to war in Europe, selling his deadly skills to the highest bidder. But now he’s about to take off on a flight that will open his eyes—and his heart.

Embittered by past failures and broken dreams, American fighter pilot David Duane believes in but one cause—his own. Europe is at war, and he’ll fight it for a price, selling his deadly flying skills to the highest bidder.

Duane has come to the icy white wastes of Scandinavia to wage a private war in the skies. But he’s about to take off on a flight and undertake an unforgettable journey—On Blazing Wings—to a place beyond the imagination … leading to a revelation that will open his eyes and his heart.

In a world divided by war, Duane discovers that sometimes you have to make a choice, and that making the wrong one could cost him the woman he loves. 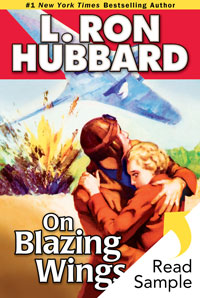 As a barnstorming pilot in the early days of aviation, L. Ron Hubbard was dubbed “Flash” Hubbard by the aviation magazines of the day. His unique personal and pioneering knowledge of flight streaks across the page in novels like On Blazing Wings.

ack-ack: an antiaircraft gun or its fire.

Democratic People’s Government of Finland (DPGF): also known as the Terijoki Government; a Soviet puppet regime created in the occupied Finnish border town of Terijoki on December 1, 1939. It was used for both diplomatic and military purposes. They hoped it would encour­age Socialists in Finland’s army to defect.

Fokker D.XXI: a fighter plane designed in 1935 and used by the Finnish Air Force in the early years of World War II. Designed as a cheap and small but rugged plane, they were very suit­able for the Finnish winter conditions. They performed better and for much longer than other fighter planes acquired prior to the start of the war, and were more evenly matched with the fighter planes of the Soviet Air Force.

Lufbery circle: an air combat tactic that was most commonly used during World War I. It was purely defensive in nature and involved all members of the defending aircraft forming a hor­izontal circle in the air when attacked, with each plane theoretically protecting the plane in front of him. This tactic was intended for slower, less capable aircraft when attacked by ag­gressive enemy fighters, and with bombers it had the added benefit of defensive gunners that further prevented enemy fighters from attacking the formation.

M-17: a Soviet-licensed copy of a German BMW aircraft engine used in the early versions of the TB-3 heavy bomber.

Mannerheim Line: a defensive fortification on the Karelian Isthmus (a land bridge between Rus­sia and Finland) built by Finland against the Soviet Union. During the Winter War (1939–1940) it became known as the Mannerheim Line, after Field Marshal C. G. E. Mannerheim who designed the plans for it. Some of the most fierce fighting of the Winter War took place along this line.

Murmansk: a city of northwest Russia on an inlet of the Barents Sea. A major ice-free port, it was an important supply line to Russia in World Wars I and II.

noita: (Finnish) a shaman who by means of falling into a trance travels to the spirit world to meet the souls of the dead who can offer wisdom otherwise unattainable.

Odessa: a seaport in southern Ukraine on the Black Sea.

parole: word of honor, especially that of a prisoner of war who is granted freedom only after prom­ising not to engage in combat.

pimmies: (Samoyed, the language of the nomadic peoples of northern Siberia) boots made of deer­skin.

Pole Star: North Star; a star that is vertical, or nearly so, to the North Pole. Because it always in­dicates due north for an observer anywhere on Earth, it is important for navigation.

Popular Front: a political coalition of leftist parties against fascism; in 1936 the Popular Front was formed in Spain consisting of the Communist Party of Spain, Socialists and other left-wing organizations.

Rif: Er Rif; a hilly region along the coast of northern Morocco. The Berber people of the area re­mained fiercely independent until they were subdued by French and Spanish forces (1925–1926).

tab-trimming: adjusting the tab, a small, adjustable hinged surface, located on the trailing edge of the aileron, rudder or elevator control surface. It is adjusted by the pilot to maintain balance and to help stabilize the aircraft in flight.

TB-3 (ANT-6): (civilian designation ANT-6) a heavy bomber aircraft that was deployed by the Soviet Air Force in the 1930s. It saw combat as a Zveno project fighter mothership and as a light tank transport.

Terijoki: a town won from Finland in a treaty with Moscow (1940) and under the jurisdiction of St. Petersburg, Russia; located on the Karelian Isthmus (land bridge connecting Finland and Russia). The town became known to the world during the Winter War as the site of the Com­munist puppet regime, also known as the Democratic People’s Republic of Finland. The Win­ter War (November 1939 to March 1940) broke out when the Soviet Union attacked Finland.

Wright Cyclone engine: designed in the US by the Wright Aeronautical Corporation, formed in 1919, the Cyclone was a new high-powered, air-cooled engine used extensively by the US government through World War II.

Zveno: Zveno project; a parasite aircraft project developed in the Soviet Union during the 1930s. It consisted of a TB-3 heavy bomber acting as a mothership for between two and five fighters. The fighters either launched with the mothership or docked in flight and they could refuel from the bomber.