Speed Kyle, builder of planes, and Cal Bradley, daredevil test pilot, need money quick and the answer is the National Air Meet. But there’s sabotage in the air and love on the ground—and together they make a very volatile mix.

Speed Kyle is a master-builder of the hottest, fastest planes around. Cal Bradley’s a daredevil test pilot who pushes those planes to the limit. Add in Speed’s blond bombshell daughter who fears that Cal will go too far—and you’ve got a winner.

And as far as Speed and Cal are concerned, winning is everything. Speed’s company is bleeding cash, and they need money quick. They’re competing in the upcoming National Air Meet, and to the victor goes the spoils—some extremely lucrative contracts.

But there’s sabotage in the air and love on the ground—and together they make a very volatile mix. If you love fast planes, fast action, and unforgettable women, grab onto Hurtling Wings and hold on for dear life. 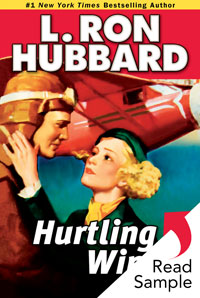 As a barnstorming pilot in the early days of aviation, L. Ron Hubbard was dubbed “Flash” Hubbard by the aviation magazines of the day. He covered air meets and the latest developments in aviation, advising pilots on flying in adverse conditions. His unique and pioneering insight of flight streaks across the page in novels like Hurtling Wings.

ailerons: hinged flaps on the trailing edge of an aircraft wing, used to control banking movements.

barograph: a barometer that automatically records on paper the variations in atmospheric pressure.

cock-and-bull story: a tale so full of improbable details and embellishments that it is obviously not true.

cowl or cowling: the removable metal housing of an aircraft engine, often designed as part of the airplane’s body, containing the cockpit, passenger seating and cargo but excluding the wings.

Fokker D.XXI: a fighter plane designed in 1935 and used by the Finnish Air Force in the early years of World War II. Designed as a cheap and small but rugged plane, they were very suitable for the Finnish winter conditions. They performed better and for much longer than other fighter planes acquired prior to the start of the war, and were more evenly matched with the fighter planes of the Soviet Air Force.

Gabriel: the archangel who will blow a sacred trumpet or horn to announce Judgment Day.

hook, on his own: by oneself; independently.

NAA: National Aeronautics Association; established in 1922 as a nonprofit organization “dedicated to the advancement of the art, sport and science of aviation in the United States.” It is the official record-keeper for US aviation and provides observers and compiles the data necessary to certify aviation and spaceflight records of all kinds.

pimmies: (Samoyed, the language of the nomadic peoples of northern Siberia) boots made of deerskin.

prop wash: the disturbed mass of air pushed aft by the propeller of an aircraft.

pylons: towers marking turning points in a race among aircraft.

skidded: (of an airplane) moved sideways in a turn because of insufficient banking.

snap rolled: (of an aircraft) quickly rolled about its longitudinal axis while flying horizontally.

spike your guns: to spoil someone’s plans. The phrase “spike a gun” comes from rendering a cannon useless by driving a spike into the touchhole where the cannon powder is ignited.

stabilizer: a device that provides aircraft stability and longitudinal balance in flight, using horizontal and vertical stabilizers (fins) that are similar to the aircraft wing in structural design and function of providing lift at an angle to the wind.

tachometers: devices used to determine speed of rotation, typically of an engine’s crankshaft, usually measured in revolutions per minute.