Beyond All Weapons trade paperback

Firstin Guide and a handful of colonists escape from the long reach of a tyrannical Earth government imposing its will on their Martian habitat. They escape on a starship and flee to a new planet to engineer their revenge—yet they do not take into account the irrefutable passage of time.

Firsten Guide is a tough, wise-cracking rebel leader who’s light years ahead of his time—and about to lead his crew into a battle that’s Beyond All Weapons.

He and his fellow colonizers of Mars have faced a brutal crackdown engineered by Earth’s tyrannical government. But the resourceful Firsten has developed an extraordinary new fuel that enables him and his hardy band to escape into space—and time.

Escape, however, is not enough. Firsten wants revenge. But the universe is full of unexpected twists and turns. Just as Prometheus flew too close to the sun, Firsten will soon discover that when you attempt to break the laws of physics, you can get burned.

Also includes the science fiction adventures “Strain,” the story of a space war’s brutality and one man’s struggle to keep a secret under the pain of torture; and “The Invaders,” in which the distant crystal mines are under attack until a technician crystallizes a unique strategy to undermine the attackers.

“A thrilling space adventure … the terror and excitement builds through to the end.” —Publishers Weekly 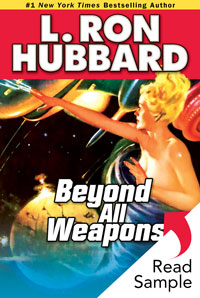 L. Ron Hubbard was a pioneer in his use and development of Einstein’s theories of space and time as a plot point in his fiction. In Beyond All Weapons, he explains: “As mass approaches the speed of light … it approaches infinity. And, as mass approaches infinity, time approaches zero. It was only nine days back from Alpha. But in those nine days, six thousand years have passed by Earth.” It stands as one of the earliest—and most succinct—descriptions of the theory.

Beyond All Weapons Glossary

aiguillette: a decorative cord with hanging points worn on the shoulder of some military uniforms.

bilged out: failed in one’s studies and resigned under compulsion.

butt: portion of a year.

dog cell: a small enclosure, so called from its likeness to a dog’s kennel.

freebooter: a person who goes about in search of plunder; pirate.

graps: grappling hooks; devices with iron claws, attached to ropes or cables and used for dragging or grasping.

ironplast: formed or molded with iron.

Parthenon: the chief temple of the Greek goddess Athena built on the Acropolis at Athens between 447 and 432 BC. It is the most famous surviving building of ancient Greece.

pillboxes: small fortified shelters with flat roofs in which large guns are located.

pilot: a publication containing detailed information of an area for use in navigation. Originally from coast pilot, a manual published by a government for mariners, containing descriptions of coastal waters, harbor facilities, etc., for a specific area. A somewhat similar publication for aviators is called an air pilot.

Vega: the fifth brightest of all stars and the third brightest in the northern sky.