Daredevil pilot Kurt Reid’s millionaire grandfather’s will demands that he brave the jungles of the Yucatán and bring back a golden nugget matching one the deceased took decades before—or Kurt inherits nothing. Without options, Kurt plunges into a perilous journey, one that may kill him or reveal the love of his life.

The ancient jungles of the Yucatan hide a world of secrets … the secrets of wealth, love, and fate. Now daredevil pilot Kurt Reid is about to tempt fate and fly into the heart of that jungle in search of his destiny—an adventure as daring and dangerous as any undertaken by Indiana Jones.

He’s looking for gold, but not just any. He’s after one particular nugget—flying blind into a tropical haystack in search of a very valuable needle. Thanks to his grandfather’s vexing dying wish, his entire inheritance—as well as the shape of his future—hangs on the success of his journey.

As if that weren’t bad enough, Kurt soon finds that his family legacy runs deep and dark in the Yucatan. The Mayans mistake Kurt for his grandfather, and they’ve got fifty-years worth of revenge to serve up. Whether he lands on the sacrificial altar or in the arms of his sexy co-pilot Joy, things are bound to heat up fast in pursuit of Forbidden Gold. 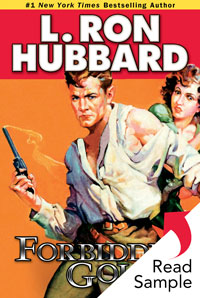 In 1931, as a student at George Washington University, L. Ron Hubbard founded the college Glider Club and within a few months a respected columnist said “he is recognized as one of the outstanding glider pilots in the country.” Later he wrote as the aviation correspondent for the prestigious flying magazine Sportsman Pilot. His combined writing and flying expertise comprised the perfect recipe to give stories like Forbidden Gold their authentic flavor.

Annapolis: the capital of Maryland and the site of the US Naval Academy, founded in 1845.

fire, Gridley: refers to Charles Vernon Gridley (1844–1898); US naval officer who started the Battle of Manila Bay in the Spanish-American War with the order from his commanding officer, “You may fire when you are ready, Gridley.” The Spanish fleet was annihilated without the loss of a single American life. This dramatic victory eventually led to the US annexation of the Philippines.

great seal: the principal seal of a government or state, with which official documents are stamped.

henequen: a plant that has large thick fibrous leaves shaped like swords, the fiber from which is used in making rope and twine. Native to tropical America, chiefly the Yucatán Peninsula of Mexico.

knickerbockered: clothed in loose-fitting pants gathered at the knee or calf.

mummery: a pretentious or hypocritical show or ceremony.

peg-topped: describing pants that are full and gathered at the hips and narrow at the ankles.

puede ser: (Spanish) could be.

QST: radio signal meaning “general call to all stations.” The Q code is a standardized collection of three-letter message encodings, all starting with the letter “Q”; initially developed for commercial radiotelegraph communication and later adopted by other radio services.

rudders: devices used to steer aircraft. A rudder is a flat plane or sheet of material attached with hinges to the craft’s stern or tail. In typical aircraft, pedals operate rudders via mechanical linkages.

sisal: a strong fiber obtained from the leaves of a plant native to southern Mexico and now cultivated throughout the tropics, used for making rope, sacking, insulation, etc.

sub-Thompson: a type of machine gun that fires short pistol rounds, named after its creator, John Taliaferro Thompson, who produced the first model in 1919.

TAT: Transcontinental Air Transport, airline founded in 1928. It was one of the first to be geared to passenger service at a time when most airlines focused on air mail. In 1930, it merged with Western Air Express to form what became TWA.

Toltecs: members of an Indian people living in central Mexico before the advent of the Aztecs and traditionally credited with laying the foundation of Aztec culture.

uppers, on my: on one’s uppers; poor; in reduced circumstances. First recorded in 1886, this term alludes to having worn out the soles of one’s shoes so badly that only the top portions remain.

wig-wag: a method of using flags or pennants to send signals.

yo creo: (Spanish) I believe.

Yucatán: a peninsula mostly in southeastern Mexico between the Caribbean Sea and the Gulf of Mexico.