Constable Bob “Lawbook” Dixon is the toughest manhunter in Canada’s Royal Mounties. Dixon’s known for keeping to the very letter of the law while bringing harsh justice to the Arctic, but events turn swiftly against him when he’s framed for murder and becomes fair game for those out to settle old scores.

Spring has come to White Bear Landing—and so has the law, in the firm hands of Royal Mounted policeman and pilot Bob Dixon. “Lawbook” Dixon’s gruff and tough, and in this outpost halfway between the arctic mines and civilization, he’s known for taking the law to extremes.

More than once Dixon has meted out his own brand of rough justice with hard fists and hot lead, but now the tables have turned. The past has come back to haunt him, he’s been set up as a murder suspect, and a rogue’s gallery of enemies are lining up to settle old scores …

Out on the icy tundra, on the edge of the world, revenge can be cold—and brutal. Dixon’s only hope is to let the trust of a good friend and the love of a good woman lead the way to true justice and redemption—on Arctic Wings. 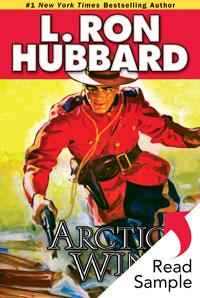 L. Ron Hubbard never wrote a word, conceived a character, or described a setting without first finding out all he could about the people and places that drove his stories. He wrote: “I began to search for research on the theory that if I could get a glimmering of anything lying beyond a certain horizon, I could go deep enough to find an excellent story. I read exhaustively. I wanted information and nothing else.” His exhaustive research—and search for the excellent story—comes through brilliantly in Arctic Wings.

The Stories from the Golden Age series reflect the words and expressions used in the 1930s and 1940s, adding unique flavor and authenticity to the tales. While a character’s speech may often reflect regional origins, it also can convey attitudes common in the day. So that readers can better grasp such cultural and historical terms, uncommon words or expressions of the era, the following glossary has been provided.

ailerons: hinged flaps on the trailing edge of an aircraft wing, used to control banking movements.

Bowden: a type of flexible cable used to transmit a pulling force for lighter applications over short distances.

Colt: revolver manufactured by the Colt Firearms Company, founded in 1847 by Samuel Colt (1814–1862), who revolutionized the firearms industry with the invention of the revolver.

Dominion: a self-governing territory of the British Commonwealth.

mosquito boots: similar to riding boots, made of suede leather with thin soles.

placer: a waterborne deposit of gravel or sand containing heavy ore minerals, as gold, which have been eroded from their original bedrock and concentrated as small particles that can be washed out.

puncheon: large timbers with one flattened side, usually used for flooring.

redcoat: an officer of the Royal Canadian Mounted Police, the federal police force of Canada.

Russian Bear: a reference to the large brown bear, often identified with Russia itself. The bear has long been a figure in Russian folklore and has been used in decorative Russian woodcarvings, in coats of arms, etc.

Union Jack: a national flag of the United Kingdom. Canada was colonized by the French and Brit­ish. In 1763 England gained possession of the French territory by treaty and Canada came to be dominated by the British until the country attained independence in 1931.

Vassar: a women’s college founded in 1861 and one of the oldest institutions of higher education in the US. It was associated in its early years with the social elite and upper class.

Vickers: a machine gun made for the British Army by a company called Vickers Limited. The gun had a reputation for great solidity and reliability.

voyageur: a boatman, woodsman, trapper or explorer formerly hired by fur companies to carry furs and supplies from one remote station to another, especially in Canada and the Northwestern US.

Webley: Webley and Scott handgun; an arms manufacturer based in England that produced hand­guns from 1834. Webley is famous for the revolvers and automatic pistols it supplied to the British Empire’s military, particularly the British Army, from 1887 through both World War I and World War II.