Caution Jones, a man who, despite his nickname, risks the hazards of a breathtaking, around-the-world flight while a rival airline desperately tries to sabotage his every move.

They don’t call him Caution Jones for nothing. An ace pilot, ever since his barnstorming father was killed in an air stunt, Jones has stuck strictly to business—as the no-nonsense general manager of Trans-Continental Airlines. But he’s about to find that sometimes if you want to get anywhere, you have to throw caution to the wind.

The race is on for a monster contract: the US Postal Service. But to get it, Trans-Continental will have to circle the globe and beat its top competitor to the prize. And there’s only one pilot with the skill to do it: Caution Jones. He’ll have to dust off his wings and soar to heights even his father never dreamed of.

The wild blue yonder has never been wilder as Jones discovers that the competition will go to any length to bring his plane down. But an even greater challenge sits in his own cockpit—his co-pilot. She’s blonde, she’s brazen, and she just might get Caution Jones to take the biggest risk of all.

Includes the aviation adventure “Boomerang Bomber,” in which a former US Army officer undertakes a mission for the Chinese only to end up in the crosshairs of Japan’s Imperial military. In a world of double- and triple-crosses, this is one conflict that can only be settled in battle … in the sky. 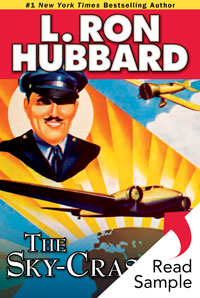 L. Ron Hubbard, the pilot, was a sensation in his flying days. As an article in the July 1934 issue of The Pilot magazine said: “Wherever two or three pilots are gathered together around the Nation’s Capital, whether it be a Congressional hearing, or just in the back of some hangar, you’ll probably hear the name of Ron Hubbard mentioned … for the flaming haired pilot hit the city like a tornado a few years ago and made women scream and strong men weep by his aerial antics. He just dared the ground to come up and hit him.” And straight from the cockpit to the typewriter, Ron Hubbard brought all the thrills and chills of his flight experience to his stories.

airdrome: a military air base.

chiselers: people who cheat or swindle.

Columbus: Christopher Columbus (1451–1506), Italian navigator who discovered the New World in the service of Spain while looking for a route to China.

Cosmoline: a substance obtained from the residues of the distillation of petroleum, essentially the same as Vaseline, but of heavy grade. Used as a protective coating for firearms, metals, etc.

cowling: the removable metal housing of an aircraft engine, often designed as part of the airplane’s body, containing the cockpit, passenger seating and cargo but excluding the wings.

Curtiss Hawk: US-built fighter aircraft of the 1930s, it was one of the first fighters of the new generation consisting of sleek monoplanes with extensive use of metal in construction and powerful piston engines.

Floyd Bennett Field: New York City’s first municipal airport, now defunct as an active airfield. Located in Brooklyn, it was created by connecting several marsh islands by filling them with pumped sand, and is now physically part of Long Island.

galleons: large three-masted sailing ships, usually with two or more decks; used mainly by the Spanish from the fifteenth to eighteenth centuries for war and commerce.

Graphic: Graflex Speed Graphic camera. It was the dominant portable professional camera from the 1930s through the end of the 1950s.

gyroscopic: having the characteristic of a gyroscope, a device containing a wheel that spins freely within a frame, used on aircraft and ships to help keep them horizontal.

inertia starter: a device for starting engines. During the energizing of the starter, all movable parts within it are set in motion. After the starter has been fully energized, it is engaged to the crankshaft of the engine and the flywheel energy is transferred to the engine.

Inland Sea: a narrow sea that is 270 miles (434.5 km) long, nine to thirty-five miles (fourteen to fifty-six km) wide and surrounded by three of Japan’s four main islands. Known as Seto Naikai or “sea between straits,” it is said to be an object of reverence to the Japanese.

JN-9: Curtiss N-9; a seaplane used to train US Navy pilots during World War I. The N-9 was used in 1916 and 1917 for the development of ship-mounted launch catapults and flight testing the new autopilot components intended to be used in pilotless “aerial torpedoes.” They were retired by the Navy in 1927.

Kawasaki KDA-5: a fighter biplane built by Kawasaki, a Japanese aircraft manufacturer founded in 1918. The first prototype flew in 1932; 380 of these planes were built.

Kobe: a seaport in southern Japan.

line pilot: a pilot that flies a route.

Magellan: Ferdinand Magellan (1480–1521); in 1519 he sailed west around South America and across the Pacific Ocean to the Spice Islands (islands in Indonesia colonized by the Portuguese). He was killed in battle in the Philippines but one of his original five ships, Victoria, eventually made it back to Spain. Though Magellan didn’t complete the entire circumnavigation, as the expedition’s leader he is usually credited with being the first man to circle the globe.

Morane: French aircraft manufacturer, founded in 1911, which produced monoplane fighter aircraft used in World War I and developed a system to allow machine guns to be mounted on the front of aircraft and fired through the propeller.

NAA: National Aeronautics Association; established in 1922 as a nonprofit organization “dedicated to the advancement of the art, sport and science of aviation in the United States.” It is the official record-keeper for US aviation and provides observers and compiles the data necessary to certify aviation and spaceflight records of all kinds.

octant: a navigational instrument like the sextant but with an angle of only forty-five degrees.

precession: gyroscopic precession; where the axis of a spinning object (i.e., a part of a gyroscope) “wobbles” or has a change in rotational motion when the angular forces made by the aircraft are applied to it. In this case, because the plane is flying on autopilot, changes in direction and changes in the plane’s physical location as it flies cause precession in the gyroscope that drives the autopilot, and must therefore be compensated for.

pylons: towers marking turning points in a race among aircraft.

Ural Mountains: a mountain range in what is now the Russian Federation, extending north and south from the Arctic Ocean to near the Caspian Sea, forming a natural boundary between Europe and Asia.

Vasco de Gama: (1469–1524) naval commander whose expedition from Lisbon in 1497 to India led to Portuguese dominance of the Eastern spice trade.