Danger in the Dark trade paperback

Billy Newman has newly purchased a South Seas island only to discover it’s haunted by the giant shark-god Tadamona. Unfortunately the sharp-toothed entity wants more than ritual sacrifice; it’s bent on destroying the entire island unless Billy battles it out like David (without the slingshot) versus Goliath!

Fortune hunter Billy Newman is not a man of great strength or physical courage—he gets by on his wit, wiles, and good looks. And he’s had quite a good run—striking gold in the Philippines and buying his very own island in the South Seas.

But there’s trouble in paradise, and Billy’s in the thick of it. The island’s crops are failing. The island’s people are dying. And the island’s owner—Billy—is taking the heat. Why? Because he’s angered the 75-foot-tall big-boss god of the island.

75-foot tall? To Billy, it’s a laughable superstition—until he finds out just how serious the islanders are. They’re out to sacrifice a beautiful young woman to the supposed god. The only way Billy can save her is to humor the locals and pretend to take the spirit on. But the joke may be on Billy … as he has to screw up some very real courage to face the very real Danger in the Dark.

Includes the fantasy adventures “The Room,” in which Uncle Toby goes to his room, never to return, leaving it to his nephew to explore the magic and mystery of the place; and “He Didn’t Like Cats,” the story of one man’s feline phobia and the hauntingly high price he pays for it. 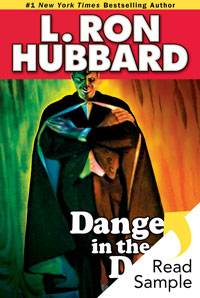 L. Ron Hubbard lived on Guam in 1927, while his father was assigned to the US naval station there. In his journals he describes a local superstition: “the great cheese ghost” named Tadamona. He wrote that the devil had the shape of a man, attained the height of coconut trees, and was the cause behind all sickness and disease. To dispel the superstition, Ron descended into Tadamona‘s supposed abode, a great underground stream—an encounter reflected in Danger in the Dark.

Danger in the Dark Glossary

banca: a boat used in the Philippines, made from a single log and furnished with an outrigger.

bime-by: by and by; eventually.

bridge lamp: a traditional floor lamp having a classic design with a pleated shade that diffuses the light.

Chamorro: a people inhabiting the Mariana Islands; also the language of these people.

culverts: tunnels that carry a stream or open drain under a road.

Department of Commerce: the department of the US federal government that promotes and administers domestic and foreign commerce.

djellaba: a loose-hooded cloak of a kind traditionally worn by Arabs.

droll: amusing in a strange or quaint way.

dugout: a boat made by hollowing out a log.

gugus: natives of the Philippines.

howitzers: cannons that have comparatively short barrels, used especially for firing shells at a high angle of elevation for a short range, as for reaching a target behind cover or in a trench.

Joblike: of or like Job, the central figure in a parable (story designed to teach a religious principle or moral lesson) from the Bible. Job is a man who is blameless and honorable. He feared God and turned away from evil. Despite losing his possessions, sons and health, he does not lose his faith in God.

Kaisan Isle: one of the Mariana Islands, approximately 1,500 miles (2,414 km) southeast of the Philippines.

lettered streets: streets that are oriented east to west and use a single letter of the alphabet; for example, “A Street.”

longboat: a large boat that may be launched from a sailing ship.

long house: a type of long, narrow, single-roomed building that served as a communal dwelling.

lugger: a small boat used for fishing or sailing and having two or three masts, each with a four-sided sail.

Luzon: the chief island of the Philippines.

magnesium flare: a flare made of a light, silver-white, metallic element that burns with a dazzling white light.

mestiza: a woman of mixed native and foreign ancestry.

muezzin: a man who calls Muslims to prayer from the minaret (a slender tower with a balcony) of a mosque.

parabola: a type of curve made by an object that is thrown up in the air and falls to the ground in a different place.

pitch: a line of talk designed to persuade.

plucking up: summoning up one’s courage or rousing one’s spirits.

protocol: the code of international courtesy governing the conduct of those in the diplomatic service or otherwise engaged in international relations. Within the State Department, the Office of the Chief of Protocol is responsible for advising the president, vice president and secretary of state on matters of national and international diplomatic protocol.

prow: the fore part of a ship or boat, sometimes used to refer to the ship itself.

put in: to enter a port or harbor, especially for shelter, repairs or provisions.

Robber Islands: a former name for the Mariana Islands, a group of islands east of the Philippines. They were so named by the Spanish explorer who discovered the islands, when the natives robbed his ships.

sandbox: a primitive sort of spittoon, consisting of a wooden box filled with sand.

sarong: garment consisting of a long piece of cloth worn wrapped around the body and tucked under the armpits.

straw: something with too little substance to provide support in a crisis.

Tiger Rag: a lively tune that gained national popularity after being recorded by the Original Dixieland Jazz Band in 1917. Hundreds of recordings of the tune appeared following this and through the 1920s. With the coming of sound film, it often appeared on soundtracks of both live action movies and animated cartoons when something very energetic was wanted.

topee: a lightweight hat worn in tropical countries for protection from the sun.

truck with, had no: had no dealings or associations with.

varmint: an objectionable or undesirable animal, usually predatory, as a coyote or bobcat.

what for: a punishment or scolding.