Outlaw Brazos races to take a “hit job” from Whisper Monahan. But things soon take a supernatural spin when Brazos acquires another shadow after killing a witch doctor, who, with his last breath, swears a deadly curse upon his soul.

Every man walks with a shadow … but what happens when he acquires a second one? Just ask Brazos who’s a cold-blooded killer for hire with blood on his hands and a posse on his tail.

Desperate for cash, Brazos accepts $200 to gun down a local man named Brant. He’ll earn every penny … but in the end, there’ll be the devil to pay. Because to put a bullet in Brant means putting one in his partner as well—an eerie stranger schooled in the black art of witchcraft. This is one killing that brings with it a deadly curse—and a second shadow.

As Brazos is about to discover, the Wild West doesn’t get any wilder than when a man is damned to live—and die—in the Shadows from Boot Hill.

Also includes the Western adventures “The Gunner from Gehenna,” in which a plot to steal a miner’s gold reveals how a good man can go bad … and a bad man can do good; and “Gunman!,” the story of an aging gunfighter turned lawman who shows his town what a real man is made of. 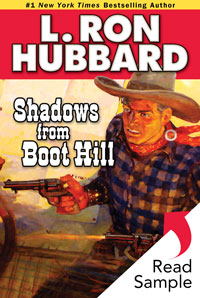 A note from L. Ron Hubbard, written many years ago, that could as well be addressed to you, today’s reader: “Dear Range Boss: Four million of my words have been published in fifty different magazines. Just now I’m larruping fantasy fiction more than anything else, though I’ve been writing Westerns for some time, too. Hope your readers like Shadows from Boot Hill. The Old West was superstitious in the extreme and reeks with more fantasy than The Arabian Nights.”

alkali: a powdery white mineral that salts the ground in many low places in the West. It whitens the ground where water has risen to the surface and gone back down.

barrelhead, cash on the: money that is paid immediately when something is bought.

bead on, drew his: took careful aim with a gun. This term alludes to the bead, a small metal knob on a firearm used as a front sight.

Billy the Kid: (1859–1881) a nineteenth-century American frontier outlaw and gunman, reputed to have killed twenty-one men, one for each year of his life.

bonanza: in mining, a rich mine or vein of silver or gold; anything that is a mine of wealth or yields a large income.

Boot Hill: a cemetery in a settlement on the US frontier, especially one for gunfighters killed in action. It was given its name because most of its early occupants died with their boots on.

border shift: the throwing of a gun from one hand to the other, catching, cocking and, if need be, firing it without seeming to pause.

bucking the tiger: the card game faro in which players lay wagers on the top card of the dealer’s pack. Some early faro cards and layouts also displayed a portrait of a Bengal tiger, inspiring the term “bucking the tiger” to describe playing the game. In later years, a framed tiger portrait hanging outside a gaming house announced the presence of a faro game within.

consarnit: damn it; confound it.

cyanide: an extremely poisonous compound. It is used in mining as a method of extracting gold and other metals from raw ore. Cyanide is applied to the ore, where it bonds with microscopic flecks of gold that are then recovered from the cyanide solution.

deal table: a table made of fir or pine.

desert bag: a type of canteen made out of tightly woven canvas that allows the bag to sweat. Evaporation helps to keep the water in the bag cooler when traveling in hot climates.

false-fronts: façades falsifying the size, finish or importance of buildings.

fanning: firing a series of shots (from a single-action revolver) by holding the trigger back and successively striking the hammer to the rear with the free hand.

federalistas: (Spanish) supporters of the US government, especially in the early years of the country.

free-milling: said of certain ores that can be reduced by crushing and treating with mercury, without roasting or other chemical treatment.

Gehenna: Hell; a valley to the southwest of Jerusalem used for burning the corpses of criminals and animals, and later refuse of any sort. It became an example of the infernal regions.

gook: anyone who is offensive to others because of stupidity, coarseness, etc.

Henry: the first rifle to use a cartridge with a metallic casing rather than the undependable, self-contained powder, ball and primer of previous rifles. It was named after B. Tyler Henry, who designed the rifle and the cartridge.

hog leg: another name for the popular Colt revolver also known as the Peacemaker.

hombre: a man, especially in the Southwest. Sometimes it implies a rough fellow, a tough; often it means a real man.

hostler: a person who takes care of horses, especially at an inn.

Martini-Henry: a breech-loaded .45-caliber rifle adopted in 1871 as the standard British service weapon, named after its inventors.

Matagorda: a county in southern Texas.

more on the powder: the state of being quicker on the draw; a greater ability to shoot fast.

mule car: a cart pulled by a small locomotive (steam engine) in a coal yard or industrial site.

muzzleloader: a firearm that is loaded through the muzzle.

oxide ore: mineralized rock in which some of the original minerals have been oxidized. Oxidation tends to make the ore more porous; that facilitates the flow of solutions into the rock. This effect is particularly important for oxidized gold ore, as it permits more complete permeation of cyanide solutions so that minute particles of gold in the interior of the mineral grains can be readily dissolved.

palm, itching of his: “itchy palm”; a desire for money; greed.

Peacemaker: nickname for the single-action (that is, cocked by hand for each shot), six-shot Army model revolver first produced in 1873 by the Colt Firearms Company, the armory founded by Samuel Colt (1814–1862). The handgun of the Old West, it became the instrument of both lawmaker and lawbreaker during the last twenty-five years of the nineteenth century. It soon earned various names, such as “hog leg,” “Equalizer,” and “Judge Colt and his jury of six.”

Pinkerton: Pinkerton National Detective Agency, a private US security guard and detective agency established by Allan Pinkerton in 1850. Pinkerton’s agents performed services ranging from security guards to private military contracting work. They were also used as guards in coal, iron and lumber disputes, as well as the railroad strikes of 1877. During its height, the Pinkerton Detective Agency employed more agents than the US Army. The agency’s logo, an eye embellished with the words “We Never Sleep,” inspired the term “private eye.”

right-of-way: the right to build and operate a railway line on land belonging to another, or the land so used.

salted down: hit repeatedly with bullets.

salty: someone or something with a lot of experience.

Spanish corral: a circular enclosure or pen made of a stone wall with a wooden gate on one side in which livestock were kept.

tarnation: used to express anger or annoyance; euphemism for damnation.

thunderation: an exclamation of annoyance or surprise.

tintype: a photograph formed on a metal plate.

trim: to make ready or right by cutting or shortening; to prepare for the most efficient burning.

veintiuna: (Spanish) twenty-one, also called blackjack; a card game in which the winner is the player holding cards of a total value closest or equal to, but not more than, twenty-one points.

vigilantes: citizens banded together in the West as vigilance committees, without legal sanction and usually in the absence of effective law enforcement, to take action against men viewed as threats to life and property. The usual pattern of vigilance committees was to grab their enemies (guilty or not), stage a sort of trial and hang them. Their other enemies were then likely to get out of town.

war sack: a cowboy’s bag for his personal possessions, plunder, cartridges, etc. Often made of canvas but sometimes just a flour or grain sack, it is usually tied behind the saddle.

Wild Bill Hickok: (1837–1876) a legendary figure in the American Old West. After fighting in the Union Army during the US Civil War, he became a famous Army scout and later a lawman and gunfighter.