Vic Kennedy, a daring, yet desperate pilot who lands his plane at a Sahara oasis, must use his cunning—and his last few drops of fuel—to outwit a deadly opponent, deal with powerful magic and free a beautiful, captive princess.

Vic Kennedy is in one hell of a jam. Quick-witted and sharp-tongued with a maverick sense of adventure, Vic’s flown out of trouble by the skin of his teeth … and straight into the jaws of disaster.

He chose the wrong side of a rebellion, and now the French have bid him adieu and the British have said off you go. It seems the only place that will have him is Greece. The problem with that is, as soon as the Greeks get him, they plan on giving him a real send-off—at the gallows.

But Vic has a better idea, plotting a course for an oasis in the Sahara … where things are looking up. A gorgeous captive princess mistakes Vic for a genie—The Sky Devil—and if he gets his wish, well, this Sky Devil will certainly have his day. If he lives to see it.…

Also includes the adventures “Buckley Plays a Hunch,” in which an adventurer seeks to solve the mystery of three castaways who refuse to be rescued; and “Medals for Mahoney,” the story of a man who journeys into the heart of darkness to thwart a murderous conspiracy. 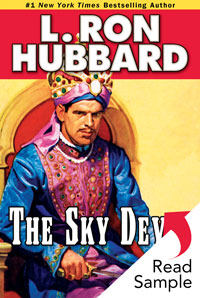 In 1933, when L. Ron Hubbard began his professional writing career, he entered a crowded and competitive field. But he very quickly separated from the pack, making a name for himself as a writer who was both good and fast. So good and fast, in fact, that in 1935 the three stories included in this volume were all published in the same issue of an all-fiction magazine. Fully a quarter of the issue had been written by Hubbard—though readers didn’t know it, two of the stories appearing under two different pseudonyms.

accouterments: pieces of military equipment carried by soldiers in addition to their standard uniform and weapons.

Ahaggar Plateau: a highland region in the central Sahara, located in southern Algeria. It is an arid, rocky upland region and the home of the formerly nomadic Tuareg.

Alexandria: the second largest city in Egypt and its largest seaport, extending about twenty miles along the coast of the Mediterranean Sea in north central Egypt.

attap: a type of palm, the fronds of which are used in the making of buildings.

bowsprit: a spar projecting from the upper end of the bow of a sailing vessel, for holding and supporting a sail.

ducks: slacks or trousers; pants made of a heavy, plain-weave cotton fabric.

Fijis: the Fiji Islands, a South Pacific nation comprised of 322 islands. About 100 are inhabited, while the balance remain nature preserves. They were once known as the Cannibal Isles because of the ferocious natives. The majority of the Fiji Islands are mountainous (volcanic in origin), with several peaks exceeding 3,000 feet. The balance of the smaller islands are a mixture of coral and limestone. In 1874 Fiji became a British colony, and gained its independence in 1970, after nearly a century of British control.

godown: a warehouse; a commercial building for storage of goods.

imghad: (Tamasheq) the Tuareg vassal class that serves the nobles.

Lake Maracaibo: an inlet of the Caribbean Sea in northwestern Venezuela. The largest natural lake in South America, it occupies an area of 5,130 square miles.

Liberia: a country on the west coast of Africa, bordered by Sierra Leone, Guinea and Côte d’Ivoire. Liberia, which means “Land of the Free,” was founded as an independent nation with support of the American government, for free-born and formerly enslaved African-Americans.

Malay: a member of the race of people who inhabit the Malay Peninsula and portions of adjacent islands of southeast Asia.

mameluke: (Arabic) a member of a military caste, originally made up of slaves, that ruled in Egypt from 1250 until 1517 and remained powerful until 1811.

mana: (Polynesian) one with power; an authority.

Marianas: Mariana Islands; a group of fifteen islands in the western Pacific Ocean, about three-quarters of the way from Hawaii to the Philippines. It consists of two groups: a northern group of ten volcanic main islands, of which only four (Agrihan, Anatahan, Alamagan and Pagan) are inhabited; and a southern group of five islands (Rota, Guam, Aguijan, Tinian and Saipan), of which all are inhabited save Aguijan.

marid: a jinnī of the most powerful class, gigantic in size.

Melanesian: a member of a people native to a division of Oceania in the southwest Pacific Ocean, comprising the islands northeast of Australia and south of the equator. It includes the Solomon Islands. The Melanesian people primarily fish and farm, and supplement their economy by exporting cacao, copra (coconut) and copper.

muezzin: a man who calls Muslims to prayer from the minaret (a slender tower with a balcony) of a mosque.

noa: common people; a Polynesian term used in place of the actual name of someone.

orang kaya: headman; before the arrival of Europeans, the people of Banda had a form of government led by orang kaya (powerful men).

Papuans: a member of any of the indigenous people of New Guinea and neighboring islands.

petcock: a small valve used to control the flow of gas.

pipe-clayed: clean and smart; pipe clay is a fine white clay used in whitening leather. It was at one time largely used by soldiers for making their gloves, accouterments and clothes look clean and smart.

Polynesian: a native or inhabitant of Polynesia, a large grouping of over 1,000 islands scattered over the central and southern Pacific Ocean.

Salonika: also Thessaloniki; city and port located in northeastern Greece. It is the second largest city and the capital of the Greek region of Macedonia.

saw-grass: grass named because the edges of the leaves are notched like a saw with teeth.

seal of Solomon: a magical signet ring said to have been possessed by King Solomon, a wise ruler of an empire centered on the United Kingdom of Israel, which gave him the power to command demons (or jinn), or to speak with animals. The signet consists of two equilateral triangles, interlaced so as to form a star, and surrounded by a circle. This symbol is thought to have the power to drive away demons.

Societies: Society Islands; an island group within French Polynesia in the South Pacific, originally claimed in 1843. Considered “Paradise on Earth,” they were explored by Captains Cook and Bligh. Divided into the Windward Islands and the Leeward Islands, they were given their name by Captain James Cook in 1769, when he named them after England’s Royal Society. Most of these rugged islands are volcanic in origin, with a few small coral atolls mixed in. Of these, the most recognizable names are the legendary islands of Bora Bora, Huahine, Moorea and Tahiti.

Solomons: Solomon Islands; a group of islands northeast of Australia. They form a double chain of six large islands, about twenty medium-sized ones and numerous smaller islets and reefs.

Southern Cross: four bright stars in the southern hemisphere that are situated as if to form a cross and used for navigation.

Sudanese: people of Sudan, the largest country in Africa, bordered by Egypt to the north and the Red Sea to the northeast.

Tamasheq: a Berber language spoken by the Tuareg.

Tārgi: (Arabic) inhabitant of Targa, the Tuareg name of a southwestern desert region and a former province of Libya.

tender: a small boat used to ferry passengers and light cargo between ship and shore.

trepang: a sea cucumber of the southern Pacific and Indian oceans, dried or smoked for use as an ingredient in soup.

windage: the amount of adjustment needed in the aiming of a projectile to counter wind deflection.

yawl: a sailing vessel rigged fore and aft with a large mainmast and a smaller mizzenmast (the third mast on a vessel having three or more masts) toward the stern.