A down-on-his-luck reporter needing a big story—finds one when the Empire State Building, Grant’s Tomb, and Grand Central Station disappear. A professor is behind it all who, rather than inventing a means of blowing things up, is doing quite the opposite.

Extra! Extra! Read all about it! The Empire State Building has vanished into thin air! Gone, too, are Grant’s Tomb and Grand Central Station, and all hell is breaking loose in New York City!

What’s the story? One grizzled old newspaper reporter known simply as Pop—is on top of it … and better stay there because his livelihood is on the line. If Pop fails to get to the bottom of the vanishing landmarks, his job will disappear as well—and land in the hands of the newspaper publisher’s son-in-law.

Any cub reporter could find someone breaking the laws of the city, but tracking down a suspect who’s breaking the laws of physics is a different story altogether. But Pop’s like a dog with a bone, and he won’t let go until he gets at the truth … no matter how strange or astounding it is. In the end, he gets a lesson in larceny, proving that when you get down to business, size really does matter.

Also features the science fiction adventures “Battle of Wizards,” in which an epic battle between science and magic unfolds with an entire planet hanging in the balance; and Hubbard’s first published foray into science fiction and fantasy, “The Dangerous Dimension,” the story of a mathematics professor who discovers an equation that enables him to teleport anywhere he can imagine … even if he doesn’t want to go. 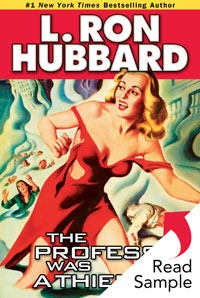 The Professor Was a Thief Glossary

Aldrich Deep: deeps are areas of the ocean over 3,000 fathoms (18,000 feet) deep. The Aldrich Deep, located east of New Zealand and nearly the size of Australia, is one of the largest and is named after Admiral Pelham Aldrich who measured its depth in the 1800s. The Aldrich Deep has been measured at 5,155 fathoms (30,930 feet).

auto-blinded: to make oneself unable to notice or understand something.

blood-laking: causing blood to pool in the lower parts of the body, thus denying blood to the brain, often resulting in a person fainting or passing out. Blood-laking can be triggered by fear, bad news or unpleasant sights, the resultant shock creates a sudden nervous system reaction that produces temporary dilation of blood vessels, reducing the blood supply to the brain.

catalyst crystals: crystals or minerals that cause or accelerate a chemical reaction without themselves being affected.

cub: cub reporter; a young and rather inexperienced newspaper reporter.

“dancing school”: another name for a brothel.

dissolution of Gaul: “Pop chose to attempt the dissolution of Gaul in the manufactures of Kentucky” is a play on words, meaning that he tried to drown his bitter feelings in whiskey. The two words are Gaul and gall. Gaul was a territory in western Europe, which was dissolved (brought to an end) militarily by Julius Caesar in the first century BC and eventually became a Roman province. Gall is something bitter or distasteful; bitter feeling. The “manufactures of Kentucky” refers to whiskey produced in Kentucky.

Drive: referring to Riverside Drive in New York City, which runs parallel with the Hudson River.

Dutch, in: in trouble or disfavor (with someone).

epistemology: a branch of philosophy that investigates the origin, nature, methods and limits of human knowledge.

jackanapes: somebody who behaves like an ape or monkey.

Ketch, Jack: executioner; an English executioner in the 1600s, notorious for his barbarous inefficiency because he employed either very awkward or sadistic techniques and his victims were known to have suffered at their deaths.

key-jumpy: speaking in a tone of voice characterized by nervous or jittery variations in pitch.

Lake Tanganyika: a lake in central Africa. It is the longest freshwater lake in the world.

morning star: a weapon consisting of a heavy ball, set with spikes and either attached to a staff or suspended from one by a chain.

Mountains of the Moon: a mountain range in central Africa, so called by the natives because of their snowcapped whiteness.

non-com: non-commissioned officer; an enlisted person of any of various grades in the armed forces, as from corporal to sergeant major.

Scheherazade: the female narrator of The Arabian Nights, who during one thousand and one adventurous nights saved her life by entertaining her husband, the king, with stories.

Sea of Dreams: a large dark plain on the far side of the moon that was mistaken by early astronomers for a sea.

semaphores: any of various devices for signaling by changing the position of a light, flag, etc.

senicide: the killing of old men.

Spinoza: Baruch Spinoza (1632–1677); Dutch philosopher. He claimed to deduce the entire system of thought from a restricted set of definitions and self-evident axioms.

stick: a very short article; from an early printing term “composing stick,” a hand-held adjustable metal tray in which one set type (a raised letter or other character cast in metal) into words and phrases for printing. One stick only held about ten or twelve lines of type, and a full-page article would be composed using many sticks of type.

stiffen your resolution: to strengthen or make firm one’s determination to do something or to carry out a purpose.

swallowtail: a man’s fitted coat, cut away over the hips and descending in a pair of tapering skirts behind. It is usually black and worn as part of full evening dress.

topee: a lightweight hat worn in tropical countries for protection from the sun.