Far in the future exist two Earth empires, separated by walls of space, poised for war. And George Marquis Lorrilard, a sometime lieutenant in the United Continents Space Navy and now a space exploiter supposedly driven by greed, must change the fate of Earth and the stars.

Is Greed good? The future of Earth and all of mankind may hang on that one question. And George Marquis Lorrilard—a space-age ace-pilot, adventurer, and fortune-hunter—is just the man to answer it.

The world is divided between Asia and the United Continents—two great superpowers locked in eternal warfare. But the balance of power is about to shift in Asia’s favor. They have developed a top-secret weapon—the cohesion projector—that could lead to annihilation on an unprecedented scale.

But as far as Lorrilard is concerned, the number one problem with the projector is that it stands in the way of his profits. Can he find a way to subvert the powerful weapon and resume his enterprising exploits? For millions of people on Earth survival may ultimately depend on the power of one man’s Greed.

Also includes the science fiction adventures, “The Final Enemy,” in which Earth discovers it faces a distant, yet devastating new foe, the identity of which is the most shocking blow of all; and “The Automagic Horse,” the story of a Hollywood special effects wizard who is about to apply his movie magic to a project that is out of this world. 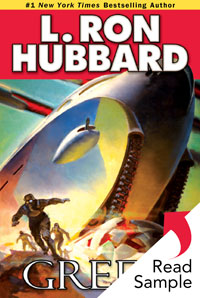 Greed was the last L. Ron Hubbard story published in Astounding Science Fiction in April 1950, marking the end of an era. Over a decade before, he had been a key figure in the opening of the Golden Age of Science Fiction. Now, as he turned his attention to other writings, the Golden Age drew to a close. But some three decades after this story appeared, Mr. Hubbard would make a triumphant return to the field with the publication of his bestselling novel Battlefield Earth and the extraordinary ten-volume series Mission Earth.

ad astra per aspera: (Latin) to the stars through difficulties.

Aida: the name of a popular Italian opera composed by Giuseppe Verdi and one of the most performed operas in North America.

alpha: the first one; the beginning.

arquebuses: heavy portable guns with a trigger mechanism that ignites the powder with a slow-burning fuse. They were invented during the fifteenth century.

astrography: the art of describing or delineating the stars; a description or mapping of the heavens.

Bell Telephone: the original Bell Telephone Company was founded in 1878 by Alexander Graham Bell’s father-in-law. It later merged with other companies to eventually become what is known today as the American Telephone & Telegraph Company (AT&T).

bit player: an actor having a very small speaking part in a play, motion picture, etc.

Blarney stone: a stone set in the wall below the battlements of the Blarney Castle, a medieval stronghold in Ireland. It is said to bestow the gift of eloquence, the art of using language well and convincingly, to anyone who kisses it.

blockbuster: a high-explosive bomb designed to demolish buildings over a large area.

bolts: short arrows for use with a crossbow.

bucko officers: officers of a ship who drive their crew by the power of their fists.

cakewalked: walked with a high prance with a backward tilt.

chewed and hewed: pondered and came to an agreement.

confederated: brought into an alliance.

drifting: making a horizontal passageway or tunnel in a rock layer.

ease her: nautical term used to order the steersman to reduce the amount of steerage during a turn. Usually given as an order as the ship approaches the desired course. The term originated during the days of sailing ships and her referred to the rudder.

flips: a class of mixed drinks with egg as a defining feature. The most commonly known flip is eggnog. A basic flip calls for a base spirit, such as brandy or rum, egg, sugar, cream and nutmeg.

furlong: a measure of distance equal to 220 yards.

geldings: male horses that have been castrated.

Ghost Rider, The: a movie from 1935 about a deputy who cleans up a town with the assistance of a ghost.

Goldwyn, Samuel: (1879–1974) Hollywood independent motion picture producer who had an instrumental role in the formation of the two largest Hollywood studios, Paramount Pictures and Metro-Goldwyn-Mayer.

Horch phaeton: the make and model of a late 1930s high-performance luxury car manufactured in Germany by the Horch Company. The Horch phaeton was a large open automobile with a folding top, seating five or more passengers. August Horch, one of the pioneering figures of Germany’s automotive industry, established a line of cars that was known for elegance, luxury and superlative standards in automotive construction. Production of Horch automobiles ceased when World War II began.

hostlers: people who are employed to tend horses.

Huguenot: French Christians who broke away from the Catholic Church in the seventeenth century. They wore eccentric, richly colored clothes.

ken: (Scottish) know, have knowledge of.

kingpin: a main or large bolt in a central position.

lookout: a problem or concern.

Lost Tribe, The: a movie produced by Columbia Pictures in 1949 as the second installment of the “Jungle Jim” series, a comic-strip adventure. The hero of the story, Jungle Jim, helps to drive off white men’s efforts to find and take the riches from a tribe hidden in the African wilds.

manganese steel: steel containing manganese (a hard gray metallic element), an alloy invented by Sir Robert Hadfield in 1882, which increases the depth of hardening in the steel, and improves the strength and toughness. This metal can still be shaped when cold without fracture, and once fully hardened, has unusual shock-resistant properties.

Man o’ War: a horse, considered by many to be the greatest US thoroughbred racehorse of all time.

meet her: nautical term used to order the steersman to turn in the opposite direction in order to check or stop a ship’s swing. The term originated during the days of sailing ships and her referred to the rudder.

Moloch: a god to whom children were sacrificed. It was depicted as a man with the head of a bull.

plate: in printing or photography, an image or copy.

rooftree: ridgepole; a long beam of wood that runs along the ridge of a roof, and to which the upper ends of the rafters are attached.

Santa Anita: Santa Anita Park; a thoroughbred race track in California known for offering some of the prominent horse racing events in the United States.

scurvy: a disease caused by a deficiency of vitamin C, characterized by bleeding gums and the opening of previously healed wounds.

Shantung: a peninsula in east China extending into the Yellow Sea.

SPCA: Society for the Prevention of Cruelty to Animals.

spur: an angular projection, offshoot or branch extending out beyond or away from a main body.

touts: those who give tips on racehorses, usually with expectation of some personal reward in return.

Westinghouse: George Westinghouse, Jr. (1846–1914), American entrepreneur, engineer and manufacturer who received more than 400 patents for his many inventions including a practical method for transmitting electric power. He founded the Westinghouse Electric Company in 1886.

will-o’-the-wisp: somebody or something that is misleading or elusive.

wrinkle: a clever trick, method or device, especially one that is new and different.