You are here: Home1 / Blog2 / Western3 / Famous Outlaws of the Old West

A few years ago, I wrote an article, Mirror, Mirror on the Wall, Who’s the Baddest of Them All? about the most famous villains of science fiction and fantasy. I was amazed at the volume of varied opinions that existed regarding the bad guys. I was equally amazed at how an article I wrote a bit later on their counterparts, the heroes, didn’t have near the response. I concluded that it really does take a good bad guy to bring out the best in the good guy.

I recently read a western story, “Devil’s Manhunt” by L. Ron Hubbard, which had two of the baddest bad guys I think I have ever read in a western. If you aren’t familiar with L. Ron Hubbard western stories, check this out: Western Tales

So I wondered if it would play out the same with famous outlaws of the old west, real or imaginary.

I wrote some of my cowboy friends for their suggestions that I could add to mine. Dr. Buck Montgomery (@BuckMontgomery) and Dakota Livesay (www.ChronicleoftheOldWest.com) were very helpful and between the three of us, we came up with some of the best outlaws of the Old West who helped make for very memorable stories.

1. Devil’s Manhunt by L. Ron Hubbard. I will start with this title as this is the one that inspired me to research and write this article. Tim Beckdolt, after spending eight hard months, has struck it rich with gold out of Arizona’s Desperation Peak, a desolate locale surrounded by nothing but an alkaline desert, when two ruthless claim jumpers, Bonnet and Sven, appear and decide they want his gold. Tim soon learns how they made it across the desert when he sees the extra canteens they are carrying. Canteens belonging to two others in their party who didn’t make it. And upon that realization, he knows they aren’t going to let him live.

Listen to a clip here. 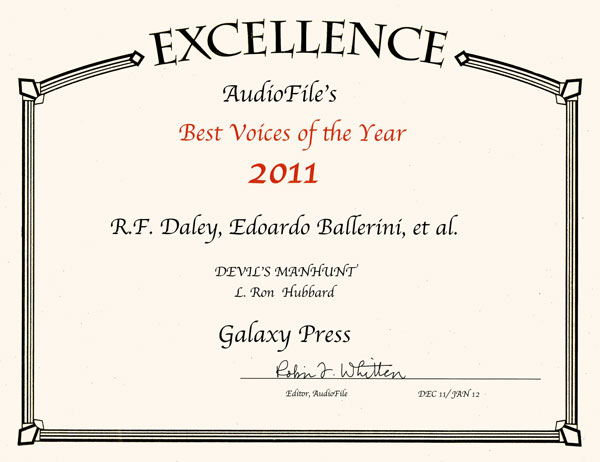 Devil’s Manhunt audiobook was recognized as one of the best of the year by AudioFile Magazine.

2. Shane by Jack Schaefer. Probably one of the best westerns ever written. Stark Wilson (It was changed to Jack Wilson in the movie) is the bad guy, a the hired gunman brought in to do whatever he needs to stop Shane. What Shane does to protect the Starrett family and rescue the community is all the better due to Wilson’s malevolence.
It was made into a movie starring Alan Ladd as Shane and Jack Palance as Wilson. And this gunfight scene has got to be one of the best ever shot:

3. The Man Who Shot Liberty Valance by Dorothy M. Johnson. Liberty Valance was an outlaw terrorizing the town of Shinbone. It is the story of Senator Ransom Stoddard returning to Shinbone for the funeral of an old friend, Tom Doniphon, and telling the truth of how Liberty Valance was killed. It is also a western romance, but this article is about bad guys vs. good guys, so is not being included.

Along with Gene Pitney’s version of the song “The Man Who Shot Liberty Valance.”

4. The Cowboys by William Dale Jennings. Will Anderson is a rancher who has just lost his crew to the promise of riches in the Dakota goldfields. But he has a herd of cattle that he has to get to market or risk losing his ranch. So he brings on a crew of schoolboys to drive his 800 head of beef. Along the way, he encounters a cattle rustler, simply known as Long Hair, who epitomizes bad. This story confirms the premise of this article by going at it backward. What “Long Hair” does makes Will Anderson all the more “good-guy.”

Hollywood made this story into a movie starring John Wayne as Anderson and Bruce Dern as “Long Hair.” This is probably the most remembered scene from the movie and one which Bruce Dern still gets grief from!

5. The Rebel Outlaw: Josey Wales by Asa Earl Carter. It’s often a nasty twist that finds those fighting for what is right can be made into a criminal. In this story, Josey Wales, a Missouri farmer, sees his family murdered by Union soldiers led by Captain Terrill and wants vengeance. He encounters Terrill again when, at the Civil War’s end, his men attempt to surrender their weapons only to be shot down by Terrill. In this story, Josey Wales is really the hero while Captain Terrill becomes the story’s villain.

The story was made into a movie by Clint Eastwood.

6. Destry Rides Again by Max Brand. Harrison Destry is the hero of the novel with Chester Bent as his antagonist. Where Destry has long thought Chester was his best friend, he only learns much later that he has been behind much of Destry’s misery. It is a coming of age story for Destry who ultimately learns what a peer is and the value and importance of friendship.

8. Northfield by Johnny D. Boggs. I have included this title in other posts about my favorite westerns. I like how the author moves from one first-person narrative to the next. As an aside, Boggs told me how difficult it was to move from one perspective to the next while keeping the flow and pace. In this instance, we have a real-life outlaw, Jesse James, but the “good guy” is the real-life town of Northfield, Minn, where the attempted bank robbery took place. Knowing what the town faced with Jesse James and his gang makes the town all the more respectable for what they did.

9. & 10. The Pistoleer by James Carlos Blake and Streets of Laredo by Larry McMurtry. The Pistoleer is a novel about John Wesley Hardin, quite possibly the most notorious killer and gunman of the Texas frontier. He killed at least 21 men in gun duels and ambushes in the period 1868–77. In Streets of Laredo, McMurtry utilizes Hardin’s vicious reputation to provide that sense of rawness that that was the Old West and so generate sympathy for those who survived it. I include Wes Hardin because of my good friend Rex Hardin, the great-great grand nephew of John Wesley Hardin and someone who doesn’t have an ounce of mean in him, who told me stories passed down to him.

The above referenced famous outlaws of the old west prove the point, that it really does take a good bad guy to bring out the best in a good guy.

So whether factual or fictional, or maybe a bit of both, who’s your favorite outlaw of the old west?

A Literary Legend of the Western Frontier: L. Ron Hubbard

Writers and Illustrators of the Future Celebrating its 35th Birthday at Dragon...
Scroll to top
0
Your cart is emptyReturn to Shop
Continue Shopping
Apply Coupon