You are here: Home1 / Blog2 / Western3 / How the Legacy of the Arizona Rangers Lives On

The fact that the Arizona Territory became the 48th state in the Union is common knowledge. Less known though is the story of the men who made this possible.

In this 3-minute video, Dakota Livesay, publisher of Chronicle of the Old West, shows how and why the Arizona Rangers came into existence.

The Arizona Rangers were re-established in 1957 and officially recognized by the state of Arizona in 2002. They exist now as an unpaid, all-volunteer, non-profit law enforcement support and assistance organization in the State of Arizona. They also provide support for youth and community services and work to preserve the tradition, honor, and history of the 1901–1909 Arizona Rangers.

If you are interested to find out more about becoming an Arizona Ranger, contact Lt. Tom Williams, Exec Off Phoenix Branch, at Tom.Williams@AZRangersPhx.com.

The Arizona Rangers legacy also lives on through entertainment.

Western Stories and “The Toughest Ranger” 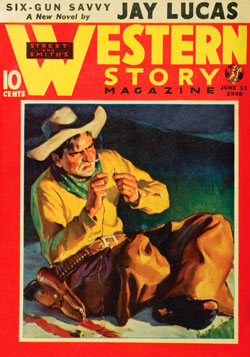 Perhaps one of the first attempts to popularize the legend of the Arizona Rangers on a national scale was L. Ron Hubbard.

L. Ron Hubbard grew up in turn-of-the-century Montana and loved the West. He understood the tradition and spirit of the frontier that had infused the daily life of his childhood. However, his familiarity with the West went well beyond just early adventures. He was also a dedicated student of the folklore and folkways of range riders and homesteaders, of Indian tribes and their turbulent pasts, of frontier towns and of the people who had crossed a continent to build them, and of the legends that lingered around them long after the original settlers were gone.

Such was the legend of the Arizona Rangers.

Originally published in the June 1938 edition of Western Story Magazine, “The Toughest Ranger” tells the story of a gun-shy cowboy by the name of Petey McGuire. Petey has been kicked around and bullied all his life. Faced with starvation, he bluffs his way into a job with the rough-’n’-tumble Arizona Rangers. But when he’s chosen to hunt down the most dangerous desperado in the territory, Petey’s forced to discover what it really means to be Ranger-tough.

Listen to a section from the full-cast audiobook production of The Toughest Ranger here:

If you are interested in tales of the old west, download “The Ghost Town Gun-Ghost” for free. It is a humorous Western where two unlikely allies take justice into their own hands.

Television and the 26 Men 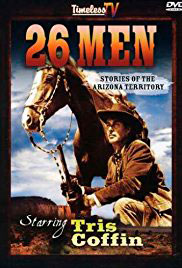 In November 1957, the first of 78 episodes of the television series 26 Men aired. The name of the series reflected the Arizona Rangers’ organization which consisted of a total of twenty-six men: a captain, a lieutenant, four sergeants, and twenty privates. One of the original Rangers was quoted as saying,

“The reason there was only twenty-six of us was because the Territory couldn’t afford no more.”

Based on true incidents from official records, the series centered on the Arizona Rangers’ attempts to maintain order throughout 113,900 square miles of territory during the final days of the Wild West.

Each episode began with the following:

This picture is dedicated to the 26 Arizona Rangers whose distinguished and heroic deeds made it possible for Arizona to become a state. This is a true story. Only the names have been changed to protect the innocent.

Music and the Big Iron 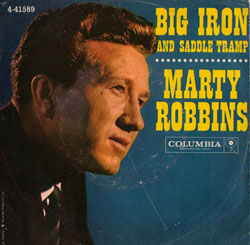 In September 1959, Marty Robbins, one of the most popular and successful country and western singers of all time, recorded a ballad and tribute to the Arizona Rangers entitled “Big Iron.”

As a youngster, Marty Robbins listened to tales told by his grandfather who claimed to be a Texas Ranger. In return, Marty would sing songs for his granddad. (For an in-depth and personal article of Robbin’s life, read Marshall Trible’s  “Big Iron On His Hip” published in True West Magazine.)

Robbins hit song, “Big Iron,” is about a duel between an Arizona Ranger who carried a “big iron” and an outlaw by the name of Texas Red. Whether Texas Red ever lived or not is subject to debate, however, the Arizona Ranger’s “Big Iron” did exist. The gun was one-of-a-kind: A custom .45-caliber copy of the Colt single-action Army revolver with a cut-down Marlin rifle barrel. Robbins discovered it in Andy Anderson’s famed North Hollywood gun shop in the late 1950s which in turn inspired him to write the song. The rest is music history.

You can hear the ballad, “Big Iron,” (Provided to YouTube by Sony Music Entertainment) sung by Marty Robbins here:

In honor of the Arizona Rangers, a radio-style performance of “The Toughest Ranger” took place in Hollywood at the L. Ron Hubbard Theatre featuring actors R.F. Daley, Darren Weiss, India Pearl, Bill Kates, Johnny Ferretti with special guest Dakota Livesay, publisher of Chronicle of the Old West and author of the book Living the Code. After the show, in recognition of the 80th anniversary of “The Toughest Ranger,” Dakota presented a bronze statue of a lone rider astride his horse to author L. Ron Hubbard.

Inscribed along the base are the words:

“As a legend of the old west, L. Ron Hubbard exemplified Living the Code of the Old West with his tale that captured both the persona and spirit of America’s last wild territory and the men who made its statehood a reality—the Arizona Rangers.”

For information about the original Western Short Stories written by L. Ron Hubbard, visit the Western Collection. The 15-book collection includes 34 short stories along with illustrations from the original publications and glossaries of historical terms.

Don’t forget to download your free copy of “The Ghost Town Gun-Ghost.”

Learn more about L. Ron Hubbard growing up in the Old West.

A War Correspondent Bleeds Ink, not Blood. Most of the Time.
Scroll to top
0
Your cart is emptyReturn to Shop
Continue Shopping
Apply Coupon