Diver Hawk Ridley battles a rival salvage crew that will stop at nothing to steal the unimaginable wealth he’s found in the depths of the Caribbean Sea. A rollicking adventure, complicated only by a beautiful stowaway.

Daring and defiant there’s no stopping diver Hawk Ridley as he takes the plunge into a briny world of untold riches and danger.

The Caribbean is a fortune hunter’s dream, salted with the gold of galleons long ago claimed by the deep. Now Hawk’s headed for the Windward Passage of Haiti to stake his claim. But a rival team has also picked up the scent, and they’re willing to turn the sea red with blood to get to the gold first.

Fighting off ruthless competitors is nothing new to Hawk … but fighting off a beautiful woman is a different story. Is she an innocent stowaway or a seductive saboteur? Between the cool millions lying on the bottom of the ocean, and the boiling-hot race to grab it, Hawk’s about to find the answer and make a discovery Twenty Fathoms Down that will blow you out of the water. 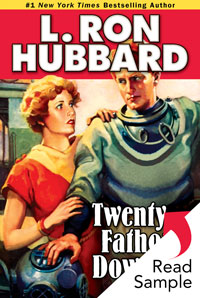 When it came to research, Hubbard was not one to head for the library. He always went to the source—in this case, a US Navy deep-sea diver who agreed to show him the ropes and the danger. Hubbard admits it was daunting—even frightening—but he returned from the experience with all the first-hand knowledge he needed to fathom the true nature of life and death underwater.

ballast tanks: tanks in the bottom and sides of a submarine that are flooded with sea water, making the submarine heavier and permitting it to descend beneath the surface of the sea. When the submarine is ready to come to the surface, air is pumped into the ballast tanks, which pushes out the water through vents and makes the submarine light enough to rise.

bead on, take a: to take careful aim at. This term alludes to the bead, a small metal knob on a firearm used as a front sight.

“bears”: from the phrase “come bear a hand,” which means to lend a hand or bring your hand to bear on the work going on. Bears refer to those who are helping.

bends, the: a condition caused by a rapid substantial decrease in atmospheric pressure when coming up from deep-sea diving, characterized by the formation of nitrogen bubbles in the blood and severe pain in the lungs and joints.

bone in the teeth: said of a ship speeding along throwing up spray or foam under the bow. The phrase comes from the image of a dog, merrily running with a bone in its teeth.

cock-and-bull story: a tale so full of improbable details and embellishments that it is obviously not true.

corselet: part of a diver’s suit consisting of a breastplate made of copper or iron, shaped so that it fits comfortably over the shoulders, chest and back. Once in place, the corselet is bolted to the suit and the diving helmet is then locked onto the corselet.

diving piano: the name given to the collection of levers in a submarine’s control room that operate the diving and resurfacing mechanisms.

dogs: any of various hooked or U-shaped metallic devices used for holding, gripping or fastening.

galleon: a large three-masted sailing ship, usually with two or more decks; used mainly by the Spanish from the fifteenth to eighteenth centuries for war and commerce.

grandstand play: a showy action or move, as in a sport, in order to gain attention or approval.

jackstaff: a flagstaff at the bow of a vessel, on which a small national flag, known as a jack, is flown.

Jacob’s ladder: a hanging ladder having ropes or chains supporting wooden or metal rungs or steps.

lungs: underwater breathing apparatuses. Between 1929 and 1932, two US naval officers developed a Submarine Escape Lung that consisted of an oblong rubber bag that recycled exhaled air. Called the “Momsen Lung” after the name of one of the officers, it hung around the neck and strapped around the waist and allowed for slow ascent to avoid the bends.

out on my feet: in a state of being unconscious or senseless but still being on one’s feet—standing up.

pulmotor: a mechanical device for artificial respiration that forces oxygen into the lungs when respiration has ceased because of drowning, etc.

quintal: a unit of weight equal to one hundred pounds.

stand on and off: to keep at a safe distance; to sail alternately toward and away from shore so as to keep a point in sight.

thwarts: seats across a boat, especially those used by rowers.

tramp steamer: a freight vessel that does not run regularly between fixed ports, but takes a cargo wherever shippers desire.

truck: a piece of wood fixed at the top of the highest mast on a ship, usually having holes through which ropes can be passed to raise or lower sails or flags.

weather eye open, keep a: to be on one’s guard; be watchful.

Windward Passage: a channel between Haiti and Cuba that connects the Atlantic Ocean with the Caribbean Sea.