Sunset Maloney hits the trail to foil Double-Deck Trotwood’s illicit attempts to buy up land in Puma Pass. But when Sunset unexpectedly falls in love with the Tinhorn’s innocent daughter, Betsy, Sunset must not only save Puma Pass but somehow open Betsy’s eyes to the truth about her father, risking both their lives in the process.

Sunset Maloney is about to find big trouble in the Big Sky country of Montana. He’s riding into the middle of a ruthless land grab, and his fight for what’s right takes an unexpected turn … in the face of a young, attractive woman.

Slim Trotwood is a cruel, greedy tinhorn—a gambler with little money and less skill—who’s determined to take possession of all the land in Puma Pass, whether by fraud or by force. And Sunset’s the only man willing to take him on. Faster than greased lightning with his six-gun, nothing can stop him from taking Trotwood down … until he meets Tinhorn’s Daughter.

Just arrived from Boston, she’s as naïve as she is beautiful, and Sunset falls hard for her. But if he can’t make her see what kind of man her father really is, he may fall even harder. Because if he loses this fight, Sunset may never see the sunrise again.

Also includes the Western adventure “When Gilhooly Was in Flower,” in which there’s romance on the range, as an unlikely cowpuncher mixes lassos with literature to find love in Gunpowder Gulch. 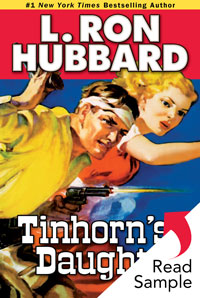 Hailing from the western states of Nebraska, Oklahoma, and Montana, L. Ron Hubbard grew up surrounded by grizzled frontiersmen and leather-tough cowboys. When he chose to write stories of the Old West, he didn’t have to go far to do his research, drawing on his own memories of a youth steeped in the life and legends of the American frontier.

aces up: in high favor or esteem; first rate, fine or outstanding in some way. In some card games, the ace is the highest valued playing card and “aces up” alludes to the fact that the card player has aces in his hand (the cards dealt to or held by each player) and thus a very good chance of winning.

batwing: one of a pair of batwings; long chaps (leggings worn for protection) with big flaps of leather. They usually fasten with rings and snaps.

Bois-Guilbert, Brian de: a knight and the villain in the novel Ivanhoe. He and Ivanhoe are mortal enemies.

buffalo robe: the prepared skin of an American bison, with the hair left on, used as a lap robe, rug or blanket.

casque: an open, conical helmet with a nose guard, commonly used in the medieval period.

chinking: on a log cabin, the sticks or rocks used to fill the chink (space between the logs).

clapboard: a type of siding covering the outer walls of buildings in which one edge of each long thin board is thicker than the other. The thick edge of each board overlaps the thin edge of the board below it.

Concord: manufactured in Concord, New Hampshire, the one-ton “Concord Coach” was the finest road vehicle of its time, costing $1,050. The wheels were made to withstand the heat and cold. The body was strengthened with iron bands and rested on three-inch-thick oxen-leather braces, installed to prevent injury to the horses that were more valuable to the stage line than any passenger. The interior was four feet wide by four and a half feet high, with adjustable leather curtains, and three padded leather seats (known to be harder than the wood beneath them) for nine passengers. The body was so strong that as many as ten or twelve passengers could perch on top. These stages were beautifully colored, red with yellow trim and gold-leaf scrollwork. However, with all of this, long rides were so uncomfortable that they were known to be “cruel and unusual punishment.”

cotillion: a brisk, lively dance characterized by many intricate steps and the continual changing of partners. Used figuratively.

couch: a pocket of sorts for placing or holding a spear or the like in a level position and pointed forward, ready for use.

double-deck: a version of the card game blackjack, played with two decks of cards. Used as a nickname.

drop on, got the: aimed and ready to shoot a gun at an antagonist before the other person’s gun can be drawn.

false-front: describes a façade falsifying the size, finish or importance of a building.

flower, in: the finest or most flourishing period.

gone to glory: gone off; lost.

Ivanhoe: a novel (1819) by Sir Walter Scott (1771–1832), a Scottish novelist and poet who was one of the most prominent figures in English Romanticism.

jigsawing: puzzling; exercising one’s mind over some problem or matter.

John B.: Stetson; as the most popular broad-brimmed hat in the West, it became the generic name for hat. John B. Stetson was a master hat maker and founder of the company that has been making Stetsons since 1865. Not only can the Stetson stand up to a terrific amount of beating, the cowboy’s hat has more different uses than any other garment he wears. It keeps the sun out of the eyes and off the neck; it serves as an umbrella; it makes a great fan, which sometimes is needed when building a fire or shunting cattle about; the brim serves as a cup to water oneself, or as a bucket to water the horse or put out the fire.

longhorn: a name given the early cattle of Texas because of the enormous spread of their horns that served for attack and defense. They were not only mean, but the slightest provocation, especially with a bull, would turn them into an aggressive and dangerous enemy. They had lanky bodies and long legs built for speed. A century or so of running wild had made the longhorns tough and hardy enough to withstand blizzards, droughts, dust storms and attacks by other animals and Indians. It took a good horse with a good rider to outrun a longhorn.

nigh: the left side (of an animal).

quirted: lashed with a quirt, a flexible, woven-leather whip with a short stock about a foot long.

right-of-way: the right to build and operate a railway line on land belonging to another, or the land so used.

rimfire saddle: a saddle with one cinch that is placed far to the front; also called a Spanish rig or rimmy.

Sharps: any of several models of firearms devised by Christian Sharps and produced by the Sharps Rifle Company until 1881. The most popular Sharps were “Old Reliable,” the cavalry carbine, and the heavy-caliber, single-shot buffalo-hunting rifle. Because of its low muzzle velocity, this gun was said to “fire today, kill tomorrow.”

slick as a whistle: quickly; easily.

tidy: a small covering, usually ornamental, placed on the backs and arms of upholstered furniture to prevent wear or soiling.

tilt course: the tournament grounds on which knights rush at or charge one another, as in a joust.

tinhorn: someone, especially a gambler, who pretends to be important, but actually has little money, influence or skill.

truck: vegetables raised for the market.

vigilantes: citizens banded together in the West as vigilance committees, without legal sanction and usually in the absence of effective law enforcement, to take action against men viewed as threats to life and property. The usual pattern of vigilance committees was to grab their enemies (guilty or not), stage a sort of trial and hang them. Their other enemies were then likely to get out of town.