Captain Gordon is hired to fly a team of American anthropologists on an expedition near the Arabian Sea. All goes well until an ancient map leading to untold treasure is discovered and all academic niceties vanish—replaced by murder and bloody deception to protect the secrets of the map.

Captain Gordon lives like he flies—by the seat of his pants, taking on any job and all comers. Now he’s bound for the forbidding mountains along the shores of the Arabian Sea, transporting a team of anthropologists on the trail of Alexander the Great. But ancient history is about to come to dangerous life with the discovery of a long-buried map—a map leading to high adventure, untold treasure, and cold-blooded murder.…

Gordon’s headed deep into The Tomb of the Ten Thousand Dead—unearthing a secret that could bury him.

Also includes two additional adventures: “The Price of a Hat,” in which the key to the Russian Czar’s life is hidden in a most unexpected place; and “Starch and Stripes,” the story of a US Marine who sets a trap for a tropical warlord that reverberates all the way back to Washington.

“An exciting story told at a brisk clip, with characters and dialogue that keep readers glued to the page: Hubbard at his best.”—Booklist 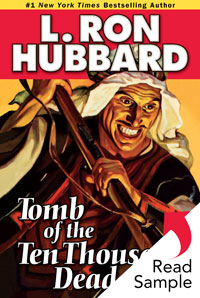 Not only was L. Ron Hubbard steeped in the history of the ancient world, he was also an avid adventurer—both in his own right and as a respected member of the famed Explorers Club. As such, he brought a wealth of insight, experience and authenticity to all his tales of adventure.

The Tomb of the Ten Thousand Dead Glossary

ace of, within an: within a narrow margin of; close to.

AWOLoose: AWOL; absent without leave, used to designate those who were gone for a relatively short time, as opposed to permanent deserters. At first AWOL was pronounced letter by letter. This is evident in the humorous World War I variant AWOLoose, meaning the same thing as AWOL. By the start of World War II, however, the pronunciation had changed to AY-wall, as if the initials constituted one word rather than an abbreviation. Humorously contrived attributions of the letters in World War II included “A Wolf On the Loose” and “After Women Or Liquor.”

baleful: threatening (or seeming to threaten) harm or misfortune.

Baluchistan: former territory of west British India, now the largest province in Pakistan. It is a mountainous region bordering on the Arabian Sea.

bobtail to a buck rear-rank: reduce to the lowest rank of private and to the rear or last in order of a body of troops.

boot: a Marine or Navy recruit in basic training.

brawny: having physical strength and weight; rugged and powerful.

brigand: one who lives by plunder; a bandit.

burnoose: a long hooded cloak worn by some Arabs.

caco: (French) a member of loosely knit bandit organizations who hired out to the highest bidder. Transfer of power in Haiti traditionally occurred when a political contender raised a caco army and marched on the capital. Transfer of power was completed when the incumbent fled the country with part of the treasury.

campaign hat: a felt hat with a broad stiff brim and four dents in the crown, formerly worn by personnel in the US Army and Marine Corps.

Cape: Cap-Haïtien; a city on the north coast of Haiti facing the Atlantic Ocean.

Cossack: a member of a people of southern European Russia and adjacent parts of Asia, noted as cavalrymen, especially during tsarist times.

Cyrus the Great: the King of Persia (an ancient empire in western and southwestern Asia) and founder of the Persian Empire.

Dehwar: a member of a tribe in the Baluchistan province of Pakistan.

drop on, got the: have achieved a distinct advantage over.

Ekaterinburg: a city in the Russian Federation of Asia, in the Ural Mountains.

flags or flagstone: a flat stone or stones used especially for paving.

Fort-de-France: the capital and largest city of Martinique, on the western coast of the island.

gendarmerie: (French) a military body charged with police duties among civilian populations. The Haitian gendarmerie, organized in 1916, initially consisted of 250 officers and 2,500 men, to provide police services throughout the country. The gendarmerie was officered by Marine Corps personnel, most of whom were sergeants with officer rank in the Haitian service. The gendarmerie fought alongside Marine occupying forces during the caco wars.

helldiver: an American aircraft carrier-based dive bomber produced for the US Navy during World War II by the Curtiss-Wright Corporation, once a leading aircraft manufacturer of the United States.

highwayman: a person who robs on a public road; a thief.

Hopi: a Pueblo Indian people of northeast Arizona noted for their craftsmanship in basketry, pottery, silverwork and weaving.

house of Ipatiev: Ipatiev House; a merchant’s house in Ekaterinburg where the former Emperor Nicholas II of Russia and several members of his family and household were executed. The house was demolished in 1977 and the magnificent “Church on the Blood,” with many auxiliary chapels and belfries, was built there after the fall of the Soviet Union.

Imperial Seal: Imperial Seal of China; a seal carved out of a historically famous piece of jade.

Iskander of the Two Horns: Alexander the Great. He is also known in Eastern traditions as Dhul-Qarnayn (the two-horned one) because an image minted during his rule seemed to depict him with the two ram’s horns of the Egyptian god Ammon.

Kolchak: Aleksandr Kolchak (1874–1920); a Russian naval commander and later head of part of the anti-Bolshevik forces during the Russian Civil War.

kubanka: a hat worn by Imperial Russian soldiers consisting of a wide band of black sheep wool with a flat top.

leatherneck: a member of the US Marine Corps. The phrase comes from the early days of the Marine Corps when enlisted men were given strips of leather to wear around their necks. The popular concept was that the leather protected the neck from a saber slash, though it was actually used to keep the Marines from slouching in uniform by forcing them to keep their heads up.

le général du cacos: (French) the general of the cacos.

legionnaire: a member of a legion; in Roman history a military division varying at times from 3,000 to 6,000 foot soldiers, with additional cavalrymen.

leg-of-mutton sleeves: sleeves that are extremely wide over the upper arm and narrow from the elbow to the wrist.

Light Browning, 1917: a light machine gun weighing fifteen pounds. It looks like and can be fired like an ordinary rifle, either from the shoulder or the hip. It was invented by John M. Browning (1855–1926), an American firearms designer.

Macedonian: someone from an ancient kingdom in northern Greece, where Alexander the Great created a vast empire.

Makran: the southern region of Baluchistan in Iran and Pakistan along the coast of the Arabian Sea.

Montezuma: an Aztec emperor of the sixteenth century.

nailing (me) down: variation of “pin down,” meaning to prevent somebody from going anywhere.

Nicholas II: Nicholas II of Russia (1868–1918); last Emperor of Russia, King of Poland and Grand Duke of Finland. He ruled from 1894 until his forced abdication in 1917. Nicholas proved unable to manage a country in political turmoil and command its army in World War I. His rule ended with the Russian Revolution of 1917, after which he and his family were executed by Bolsheviks in July 1918.

Paramaribo: the capital and largest city of Dutch Guiana (now Suriname) in northern South America on the Atlantic Ocean.

Pasni: a fishing village on the coast of the Baluchistan province in Pakistan.

Port: Port-au-Prince; the capital and largest city of Haiti.

Ras el Kuh: a town located on the southern coast of Iran.

Ras Malan: a mountain in Baluchistan (southwestern Pakistan), which slopes into the Arabian Sea.

scourge: somebody or something that is perceived as an agent of punishment, destruction or severe criticism.

Semiramis: a mythical queen of Assyria (an ancient empire and civilization in western Asia) who is reputed to have conquered many lands.

shoot landings: pilot’s lingo for the process of preparing a landing.

Siberia: an extensive region in what is now the Russian Federation in northern Asia, extending from the Ural Mountains to the Pacific.

Sverdlovsk: a city in the Luhansk Oblast province of southeastern Ukraine.

Tajik: someone living mainly in Tajikistan (a republic in central Asia), as well as parts of Afghanistan and China.

Teheran: the capital of Iran.

Tommies: common soldiers in the British Army; the term was most popularly used during World War I where German, French and Commonwealth soldiers referred to the British soldiers as Tommies.

tsar: (Russian, also tzar) shortened form of tsesar, from Latin, Caesar; a male monarch or emperor, especially one of the emperors who ruled Russia until the revolution of 1917.

tsarist: an adherent of a tsar, a male monarch or emperor.

Urals: Ural Mountains; a mountain range in what is now the Russian Federation, extending north and south from the Arctic Ocean to near the Caspian Sea, forming a natural boundary between Europe and Asia.

Western Front: term used during World War I and II to describe the “contested armed frontier” (otherwise known as “the front”) between lands controlled by the Germans to the East and the Allies to the West. In World War I, both sides dug in along a meandering line of fortified trenches stretching from the coast of the North Sea, southward to the Swiss border that was the Western Front. This line remained essentially unchanged for most of the war. In 1918 the relentless advance of the Allied armies persuaded the German commanders that defeat was inevitable and the government was forced to request armistice.

Yanks: Yankees; term used to refer to Americans in general.