Doughface Jack acquires phenomenal mental powers after a brain operation—now he can instantaneously heal, make the old young or kill. Goaded by a vengeful and beautiful woman, Doughface is propelled headlong towards the ultimate seat of power!

Penniless, homeless, and virtually lifeless, the vagrant “Doughface” Jack is about to discover that where medical marvels meet the mysteries of the human mind, amazing things happen.

Riding the rails, Jack runs afoul of a local sheriff and ends up with a crushed skull. He’s as good as dead until a savvy country doctor performs a bit of medical magic. Jack wakes up to find that his brain has been drastically altered. He has the power to save lives—and destroy them—with a single glance.

Will Jack use his astounding power for good … or for evil? His journey of discovery takes him to New York and into the arms of a woman, who has a plan of her own. Together they’re bound for Washington, D.C., and a psychic adventure that could change the shape of history.

“…a series not to be missed by any true pulp-fiction fan.” —Comics Buyers Guide 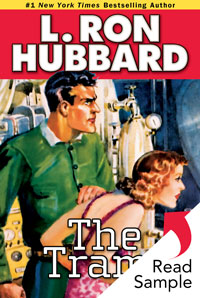 The Tramp was originally serialized in 1938 in three issues of Astounding Science Fiction. Its respected editor, John W. Campbell, wrote: “Hubbard is a very highly experienced writer, an author with a tremendous background of writing in every field. He’s one of the few professional writers I know of who gets a genuine kick out of the story he’s writing. In The Tramp, the suspense is intensified step by step, because every step points the same way. There are no backward slips, no scattered accidents that tend in any direction other than the one toward which Hubbard is driving.”

brakie: brakeman; railroad man in charge of the brakes.

bunko: a swindle in which a person is cheated at gambling, persuaded to buy a nonexistent, unsalable, or worthless object, or otherwise victimized.

chumps: suckers; people who are gullible and easy to take advantage of.

collar advertisement: collar and shirt advertisements by J. C. Leyendecker (1874–1951), an illustrator and entrepreneur who defined an era of fashion in the early twentieth century. He painted strong, athletic men and created long-running characters for the Arrow collar man ads (Arrow was a brand of shirt), as well as many others.

de facto: exercising power or serving a function without being legally or officially established.

dummy-chucker: chucking the dummy; a type of beggar who gets money by pretending to have a seizure.

fifty-leven: an expression used to describe a huge number.

goldbrickin’: goldbricking; faking; posing; pretending to be something one is not.

governor: the head of the show.

hard lines: that’s tough; something that one says in order to express sympathy for someone.

jig time, in: rapidly; in no time at all.

Ladies’ Aid Societies: groups of women whose purposes included helping their local church and community. Often such groups conducted fundraising activities for their church and to aid impoverished members of the community.

Model T Ford: an automobile produced by Henry Ford’s Ford Motor Company from 1908 through 1927. It is generally regarded as the first affordable automobile, the car that “put America on wheels.”

nuts: 1. a source of joy and pleasure. 2. an exclamation of disgust or disappointment.

O Gay-Pay-Oo: a Soviet secret police agency originally called the GPU (pronounced Gay-Pay-Oo), which stood for “State Political Administration” and was later changed to OGPU when the Russian word for consolidated or unified was added to the name.

Podunk: any small and insignificant or inaccessible town or village.

punk-water: the water that stands in rotten, decayed cavities of old trees. Called “spunk-water” by Mark Twain in Huckleberry Finn.

qui vive, on the: on the alert; vigilant.

ringmaster: the circus Master of Ceremonies and main announcer. Originally, he stood in the center of the ring and paced the horses for the riding acts, keeping the horses running smoothly while performers did their tricks on the horses’ backs.

Rochambeau: statue of the American Revolutionary War hero, General Comte de Rochambeau, in Lafayette Park, Washington, DC. As a French aristocrat, Rochambeau equipped a ship at his own expense and joined the Americans’ fight for liberty and after the war he returned to France as a national hero. The statue was presented as a gift from France to the US in 1902 as a reaffirmation of Franco-American relations in the first years of the twentieth century.

rods: a portion of the undercarriage of a train, especially the coupler under a freight car.

set her cap for me: pursue someone romantically; to try to win the favor of a man with a view to marriage.

slouch hat: a wide-brimmed felt hat with a chinstrap.

uppers, on my: on one’s uppers; poor; in reduced circumstances; first recorded in 1886, this term alludes to having worn out the soles of one’s shoes so badly that only the top portions remain.

whippersnapper: an impertinent young person, usually a young man, who lacks proper respect for the older generation; a youngster with an excess of both ambition and impertinence.