Hard-edged Sheriff Tex Larimee strides boots-first into the dangerous snare of a frame-up. When Tex arrives in the big city to help a friend, he ends up having to solve his friend’s murder or be strung up himself!

Tex Larimee is a grizzled Arizona sheriff who’s leaving the deserts of Cactus County behind, blazing a trail east to mix it up with The Slickers in the canyons of Manhattan.

Tex’s welcome to New York is a rude one. Robbed of his cash, gun and badge, he’s locked in a room in back of a run-down bar. Breaking out of the bar, he goes looking for his best friend only to find him dead, his throat cut. And the cops accuse Tex of committing the murder.…

But none of that’s going to keep a good Arizona lawman down. Discovering he’s been the subject of an elaborate frame-up job, Tex has got a few tricks of his own up his sleeve—and in his recovered Colt .45—to make even the toughest of city birds sing a different tune.

Also includes the mysteries “Killer Ape,” in which a man frees a mistreated orangutan, only to end up with a monkey on his back, as he’s accused of aiding and abetting the ape in a case of murder; and “Murder Afloat,” the story of a top narcotics cop in the US Secret Service who’s pursuit of a million-dollar score could land him in some hot—and deadly—water. 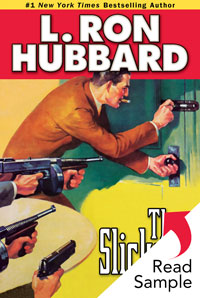 Much like Tex, L. Ron Hubbard was born and bred on the western frontier and made his way east to explore and experience life in New York City. But unlike the sheriff, Mr. Hubbard enjoyed his time in the city, where his writing career took off as he became a leading figure in its literary world. He came to know the streets and haunts of Manhattan as well as he knew the arroyos and canyons of the west, giving him the kind of insights he needed to write stories like The Slickers.

“begorrah”: (Irish) used as an exclamation or a mild oath; alteration of “by God.”

cutter: 1. a ship’s boat, powered by a motor or oars and used for transporting stores or passengers. 2. a type of US Coast Guard vessel that is over 65 feet in length. Cutter originally referred to a small, single-masted vessel, fore-and-aft rigged with two or more headsails. The term was adopted by the US Treasury Department when the US Revenue Cutter Service was formed in 1790, which then became the US Coast Guard in 1915, and cutter has come to mean a small armed vessel in government service.

davit: a cranelike device, used singly or in pairs, for supporting, raising and lowering boats, anchors and cargo over a hatchway or side of a ship.

durian: a tree native to the tropical rain forests of Southeast Asia that bears a foul-smelling but deliciously flavored fruit. The seeds are roasted and eaten like nuts.

horned spoon, by the great: a “horned spoon” is a tool made from a cow horn. The saying “by the great horned spoon” was at one time a fairly common American oath and used to make a statement emphatic. Its first recorded usage was in 1842.

Oleleh: Oleleh Harbor; a harbor on the Island of Sumatra.

Police Positive .38: Colt Police Positive; a .38-caliber revolver developed by the Colt Firearms Company in answer to a demand for a more powerful version of the .32-caliber Police Positive. First introduced in 1905, these guns were sold to many US police forces and European military units, as well as being made available to the general public.

roscoe: another name for a handgun.

slick-ear: “wet behind the ears”; someone who is inexperienced or naïve.

SOS: the letters represented by the radio telegraphic signal known as Morse code, used especially by ships in distress, as an internationally recognized call for help.

stay: any of various strong ropes or wires for steadying masts.

Sumatra: a large island in the western part of Indonesia. Most of Sumatra used to be covered by tropical rainforest.

’tween decks: between decks; spaces between two continuous decks in the hull of a vessel.

wisenheimer: smart aleck; wise guy; one who is obnoxiously self-assertive and arrogant.