Tom Christian embarks on a perilous jungle journey for gold that’s already cost the life of his partner. And waiting for him deep in the Solomon Islands is the man responsible for his partner’s murder, who wants to trap Christian and grab the treasure for himself.

Tom Christian is on the trail of revenge and a fortune in gold. Tom is headed deep into the jungles of the Solomon Islands to find Punjo Charlie—the ruthless criminal who killed his partner.

But these jungles are thick with danger … as greed, temptation and sudden violence threaten to draw Tom into the heart of darkness. There’s a pile of gold. There’s a beautiful blonde. And there’s a bloodthirsty tribe of headhunters who have fallen under the spell of Punjo Charlie.

The trap has been set. The question is: will Tom fall into it? Will he lose his way and lose his head or will he get his revenge, get the gold and get the girl? The answer lies buried in the rain forest … and in Tom’s heart. And as he’s about to discover, there’s only one way out of the jungle: all-out war. 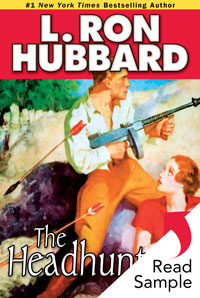 In 1927, L. Ron Hubbard sailed across the Pacific to Guam to meet his naval officer father. It was the beginning of an adventure that would take him from the Western Hills of China to the South Pacific islands. Along the way, he met Cantonese pirates, Chamorro natives, British spies, and headhunters of the South Pacific. He was one of the few Westerners to come away from an encounter with a headhunter tribe not only unscathed but bearing gifts as well. Those experiences and knowledge proved invaluable in the writing of such stories as The Headhunters.

baleful: threatening (or seeming to threaten) harm or misfortune.

Baluchistan: former territory of West British India, now the largest province in Pakistan. It is a mountainous region bordering on the Arabian Sea.

bib and tucker: “best bib and tucker”; one’s finest clothes. The term is from the mid-1700s: a bib referred to a frill at the front of a man’s shirt and a tucker was an ornamental lace covering a woman’s neck and shoulders.

black sand: a heavy, glossy, partly magnetic mixture of fine sands. Black sand is an indicator of the presence of gold or other precious metals.

blighter: somebody considered a source of annoyance.

brawny: having physical strength and weight; rugged and powerful.

coaming: a raised rim or border around an opening in a ship’s deck, designed to keep out water.

copra bugs: beetles that cause damage to copra, the dried white flesh of the coconut from which coconut oil is extracted. They are metallic blue in color, but sometimes have a greenish luster. They are 1/12th of an inch long (3.5 to 5.5 mm).

counting his coups: counting one’s strokes; successful actions or triumphs against an enemy, from the French word coup that means “a blow.”

Dehwar: a member of a tribe in the Baluchistan province of Pakistan.

gorblimey: blimey; used to express surprise or excitement. It is what is known as a “minced oath,” a reduced form of “God blind me.”

Gorgon: in Greek mythology, any of the three sisters Stheno, Euryale and the mortal Medusa, who had snakes for hair and eyes that, if looked into, turned the beholder into stone.

Kieta: the principal harbor on the island of Bougainville, the northernmost and largest of the Solomon Islands.

laying about him: striking or aiming blows in every direction. Used figuratively.

long house: a type of long, narrow, single-roomed building that served as a communal dwelling.

Makran: the southern region of Baluchistan in Iran and Pakistan along the coast of the Arabian Sea.

Malay: a member of the race of people who inhabit the Malay Peninsula and portions of adjacent islands of southeast Asia.

Melanesian: a member of a people native to a division of Oceania in the southwest Pacific Ocean, comprising the islands northeast of Australia and south of the equator. It includes the Solomon Islands. The Melanesian people primarily fish and farm, and supplement their economy by exporting cacao, copra (coconut) and copper.

mess jacket: a waist-length fitted jacket, worn chiefly as part of a uniform on formal occasions.

Micronesians: the people of Micronesia, a division of Oceania in the western Pacific Ocean comprising the islands east of the Philippines and north of the equator.

MIT: Massachusetts Institute of Technology; a private, coeducational research university located in Cambridge, Massachusetts. MIT was founded in 1861 in response to the increasing industrialization of the United States.

Negritos: members of any of various peoples of short stature inhabiting parts of Malaysia, the Philippines and southeast Asia.

not ’arf: not half; an exclamation of emphatic assent.

palanquins: covered litters carried on poles on the shoulders of four or more bearers, formerly used in eastern Asia.

panner: a container in which gold, or other heavy and valuable metal, is separated from gravel or other substances by agitation.

placer: to obtain minerals from placers (deposits of river sand or gravel containing particles of gold or another valuable metal) by washing or dredging.

poke: a small sack or bag, usually a crude leather pouch, in which a miner carried his gold dust and nuggets.

resident: Resident Commissioner; appointed by the British crown, they reside in the territorial unit they are in charge of. In the British Western Pacific Territories, this was the case for the British Solomon Islands from 1893 until a governor was appointed in 1952.

riffle box: in mining, a long sloping trough or the like, with raised obstructions called riffles, into which water is directed to separate gold from gravel or sand. The lighter material is carried in suspension down the length of the box and then discharged. The heavier material, such as gold, quickly drops to the bottom where it is entrapped by the riffles.

riffles: in mining, the strips of metal or wooden slats fixed to the bottom of a rocker box or sluice (a long sloping trough into which water is directed), that run perpendicular to the flow of water. The weight of the gold causes it to sink, where it is captured by these riffles.

sluice: sluice box; a long, narrow wood or metal artificial channel that water passes through when put in a creek or stream to separate the dirt and junk material away from the gold. Gold, a very dense metal, stays in the sluice box because of its heavy weight.

Solomon Islands: a group of islands northeast of Australia. They form a double chain of six large islands, about twenty medium-sized ones and numerous smaller islets and reefs.

Southern Cross: four bright stars in the southern hemisphere that are situated as if to form a cross and used for navigation.

spring holster: a holster that permits the user to take the gun from it quickly by pulling out instead of up.

Stokes mortar: trench mortar developed by an Englishman, Sir Wilfred Scott-Stokes (1860–1926). A mortar is essentially a short, stumpy tube designed to fire a projectile at a steep angle so that it falls straight down on the enemy. Pre-Stokes mortars were classified as “trench artillery” since they were not mobile enough to accompany troops. In 1915, Stokes designed a mortar that was small and light enough to be portable. It had a fifty-one-inch tube supported by a bipod, and the weapon could be broken down for easy transport. The cast-iron mortar bomb was three inches in diameter, and the Stokes mortar could fire as many as twenty-two bombs per minute with a maximum range of 1,200 yards.

swagger cane: swagger stick; a short stick or riding crop usually carried by a uniformed person as a symbol of authority. A swagger stick is shorter than a staff or cane.