Falsely accused of murder and grand larceny, Kurt Reid flees to Shanghai. After rescuing a White Russian spy, he’s captured by the Chinese and forced into the cloak-and-dagger world of espionage and intrigue, where everything and everyone is not what they appear to be.

American sailor Kurt Reid is a hothead and a hard case—a man who hits first and asks questions later. Scrappy and rough around the edges, it’s no wonder that when the ship’s captain turns up dead, it’s Reid who takes the rap.

Falsely accused and under the gun, Reid jumps ship and vanishes into Shanghai—only to get caught in a web of intrigue, betrayal, and murder. In a world where nothing is what it seems and everything is for sale, he’s soon out of his depth, drawn into a spy game in which the winner takes all … and the loser takes a knife to the back.

Will Reid live up to his reputation as the Spy Killer? He’ll have to learn the rules fast because, with players like sexy Russian agent Varinka Savischna in the hunt, the game is about to turn as seductive as it is sinister. 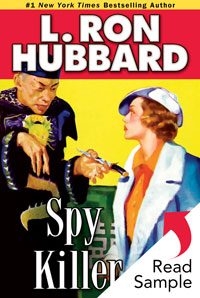 As a young man, L. Ron Hubbard visited pre-Communist China three times, where his closest friend headed up British intelligence. In a land where communists, nationalists, warlords, and foreign adventurers schemed for control, Mr. Hubbard gained a unique insight into the intelligence operations and spy-craft in the region—a knowledge that informs stories like Spy Killer.

amah: (in India and the Far East) a female servant; maid.

bead on, drew a: took careful aim at. This term alludes to the bead, a small metal knob on a firearm used as a front sight.

bichloride of mercury: a water-soluble and deadly poisonous crystalline solid used for such things as embalming, to preserve wood, and to kill germs, insects and rodents. It is also a useful but dangerous antiseptic. To help distinguish it as poisonous when being dispensed as a topical antiseptic, it is in the form of blue angular-shaped tablets.

bucko: a person who is domineering and bullying.

bucko mate: the mate of a sailing ship who drives his crew by the power of his fists.

cholera: an infectious disease of the small intestine, typically contracted from infected water.

chow bench: a short round table with four stools that fit underneath it.

clothes press: a piece of furniture for storing clothes, with hanging space and sometimes drawers or shelves.

Colt .45: a .45-caliber automatic pistol manufactured by the Colt Firearms Company of Hartford, Connecticut. Colt was founded by Samuel Colt (1814–1862), who revolutionized the firearms industry.

Concession: something conceded by a government or a controlling authority, as a grant of land, a privilege or a franchise. In Shanghai, there was land set aside by treaty as a spot where foreigners could live and trade, which is referred to as the Concession; otherwise known as “the Bund.”

cutter: a ship’s boat, powered by a motor or oars and used for transporting stores or passengers.

down in the mouth: dejected; depressed; disheartened.

embrasures: (in fortification) openings, as a loophole through which missiles may be discharged.

Hell to Halifax: a variation of the phrase “from here to Halifax,” meaning everywhere, in all places no matter how far from here. “Halifax” is a county in eastern Canada, on the Atlantic Ocean.

Kalgan: a city in northeast China near the Great Wall that served as both a commercial and a military center. Kalgan means “gate in a barrier” or “frontier” in Mongolian. It is the eastern entry into China from Inner Mongolia.

Old Glory: a common nickname for the flag of the US, bestowed by William Driver (1803–1886), an early nineteenth-century American sea captain. Given the flag as a gift, he hung it from his ship’s mast and hailed it as “Old Glory” when he left harbor for a trip around the world (1831– 1832) as commander of a whaling vessel. Old Glory served as the ship’s official flag throughout the voyage.

postern: a small gate or entrance at the back of a building, especially a castle or a fort.

tonneau: a waterproof cover, generally of canvas or vinyl, that can be fastened over the cockpit of a roadster or convertible to protect the interior.