Ace glider pilot Breeze Callahan tries to sell the Navy on using his gliders in the war effort. But Breeze soon has a war on his hands when a ruthless competitor wants the Navy to buy airplanes instead, and is willing to use any means of sabotage and betrayal to get the contract.

When it comes to flying gliders, ace pilot Breeze Callaghan is as smooth as they come. He perfects a skill that will prove vitally important for decades to come—even into the jet age, as demonstrated by Captain Sully Sullenberger, who famously landed his disabled passenger plane on the Hudson River.

Sully’s jet was brought down by a flock of geese, while Breeze is going up against a vulture named Badger O’Dowell. Both pilots are vying for a Navy contract, and Badger would love to shoot the Breeze … literally. Short of that he’ll do everything he can to sabotage Breeze in flight.

It’s game on, and as Breeze is about to discover, Badger’s an expert at playing dirty. And there’s much more than money at stake: there’s his reputation, his life, and his love of a beautiful woman. A storm is brewing, and as for danger, the sky’s the limit when Sky Birds Dare! 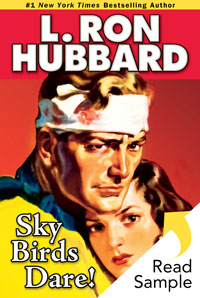 During his undergraduate days, L. Ron Hubbard served as the president of the George Washington Glider Club. He held numerous records for sustained powerless flight and was renowned for his wild aerial antics that, according to an eyewitness, “made women scream and strong men weep.” In short, there wasn’t a single flying feat in Sky Birds Dare! that Ron Hubbard himself hadn’t dared to do on his own.

Akron and Macon: two rigid airships built in the United States for the US Navy. First flown in the early 1930s, they were the only airships that could launch and retrieve planes in midair.

amphib: amphibian; an airplane designed for taking off from and landing on both land and water.

Bolling: Bolling Field; located in southwest Washington, DC and officially opened in 1918, it was named in honor of the first high-ranking air service officer killed in World War I. Bolling served as a research and testing ground for new aviation equipment and its first mission provided aerial defense of the capital.

cabane: a mastlike structure on some early airplanes, used for supporting the wing.

Charleston: a city and seaport of southeast South Carolina; a major commercial and cultural center since colonial times.

dope: a type of lacquer formerly used to protect, waterproof and stretch tight the cloth surfaces of airplane wings.

hash house: an inexpensive restaurant, diner or the like that serves a limited number of short-order dishes.

hinterland: the remote or less developed parts of a country; back country.

Keys: Florida Keys; a chain of approximately 1,700 islands beginning at the southeastern tip of the Florida peninsula and extending in a gentle arc to Key West, the westernmost of the inhabited islands. Key West is just ninety-eight miles from Cuba.

L’Enfant: Pierre Charles L’Enfant (1754–1825), French-born US engineer, architect and urban planner. After studying in Paris, he volunteered as a soldier and engineer in the American Revolutionary Army. Congress made him major of engineers in 1783. In 1791, George Washington had him prepare a plan for a federal capital on the Potomac River, which was later generally followed in the construction of Washington, DC.

leeward: situated away from the wind, or on the side of something, especially a boat, that is away or sheltered from the wind.

Pensacola: city and seaport on Pensacola Bay in northwest Florida. Noted for the US naval air station established there in 1914.

Potomac: a river in the east central United States; it begins in the Appalachian Mountains in West Virginia and flows eastward to the Chesapeake Bay, forming the boundary between Maryland and Virginia.

scud cloud: small, ragged, low cloud fragments that are unattached to a larger cloud base at first and are often seen with and behind cold fronts and thunderstorm gust fronts.

windjammer: a sailing vessel, especially one equipped with many large sails and capable of making fast voyages.