Michael Patrick Obañon is suddenly ousted from his spread by a band of criminals who falsely claim his ranch. Our caballero’s got to think fast to outwit his impostors when it’s clear that it will take far more than mere guns to win the day.

Obañon’s lost his inheritance—a 100,000-acre New Mexico spread—and he could lose his life if he’s not careful. A ruthless band of renegades has seized his land, and he’s determined to get it back. Obañon’s got one secret weapon: his fierce intelligence. He can’t outshoot the outlaws, so he’ll have to find a way to outwit them.…

Part Irish, part Mexican, Michael Patrick Obañon is as American as they come—crafty, confident, and cool under fire. It may be one man against the world, but before he’s done the world will know how the West will be won.

“Hubbard uses the traditional Western form to tell a challenging and unpredictable story, where the hero outwits his attackers instead of merely having to outshoot them. Intelligent and suspenseful.” —SomebodyDies.com 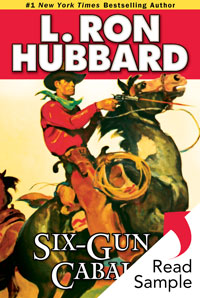 In the 1930s a radio program, Writers and Readers, hosted by Bob de Haven, delivered news of the hottest authors of the day—interviewing the writers behind the stories. Here’s how he promoted an upcoming broadcast with L. Ron Hubbard: “He has placed in print a million and a half words. He is a quantity producer, well paid, and in constant demand. He has outlined some valuable information on his lead novelette … Six-Gun Caballero.” It is an introduction to Mr. Hubbard that is as pertinent now as it was then.

¡Abajo los renegados!: (Spanish) Down with the renegades!

Ai: used as an utterance of pity, pain, anguish, etc.

arroyo: (chiefly in southwestern US) a small, steep-sided watercourse or gulch with a nearly flat floor, usually dry except after heavy rains.

Barbary Coast: the waterfront district of San Francisco in the nineteenth century, notorious for its cheap bars and nightclubs, prostitutes, gambling houses and high incidence of crime.

beeves: plural of beef, an adult cow, steer or bull raised for its meat.

blue chip: a poker chip having a high value.

bolero: a jacket ending above or at the waistline, with or without collar, lapel and sleeves, worn open in front.

charqui: (Spanish) jerked beef; beef cut into long strips and dried in the wind and sun.

cock-fight: an organized fight between two roosters, each of which is equipped with sharp metal spurs, in front of spectators who often make bets on the outcome.

Colt’s Army: Colt Model 1848 Percussion Army Revolver; designed by Samuel Colt (1814–1862) for the US Army’s Mounted Rifles, also known as Dragoons, horsemen trained to fight both on foot and while mounted. The .44-caliber, six-round cylinder handgun, also referred to as a Dragoon, was produced between 1848 and 1860 and sold to both the military and civilians.

curb bits: bits used to control a horse’s action by means of pressure on the reins. A curb bit consists of the actual bit with a chain or strap attached, passed under the horse’s jaw.

Franciscan: a member of a religious order founded by St. Francis in 1209. The Franciscans were dedicated to the virtues of humility and poverty.

frijoles: (Spanish) any of various beans used for food, especially any of certain kidney beans so used in Mexico and the southwestern US.

Gadsden: James Gadsden (1788–1858), who was sent by the US government to negotiate the purchase of a 29,640-square-mile strip of land, now the southern part of Arizona and New Mexico. The land was purchased in 1853 from Mexico and was intended to allow for the construction of a southern route for a transcontinental railroad.

GN: Great Northern Railway, the tracks of which extended more than 1,700 miles from Minnesota to Washington state.

hoist your grubhooks: raise your hands.

holdout: playing cards hidden in a gambling game for the purpose of cheating.

homesteaders: settlers who hold homesteads, a tract of public land granted by the US government to a settler to be developed as a farm. Following the Gadsden Purchase, the Donation Act of 1854 stated that 160 acres of land in New Mexico would be given to any male settler over twenty-one years of age, and that they had to live on the land and cultivate crops for four years.

jackboots: sturdy leather boots reaching up over the knee, worn especially by soldiers.

lead-pipe cinch: a task or accomplishment that is so easy as to be a certainty; a sure thing.

line camp: an outpost cabin, tent or dugout that serves as a base of operations where line riders are housed. Line riders are cowboys that follow a ranch’s fences or boundaries and maintain order along the borders of a cattleman’s property, such as looking after stock, etc.

longhorn: a name given the early cattle of Texas because of the enormous spread of their horns that served for attack and defense. They were not only mean, but the slightest provocation, especially with a bull, would turn them into an aggressive and dangerous enemy. They had lanky bodies and long legs built for speed. A century or so of running wild had made the longhorns tough and hardy enough to withstand blizzards, droughts, dust storms and attacks by other animals and Indians. It took a good horse with a good rider to outrun a longhorn.

matadores: (Spanish) bullfighters; a matador was the main performer in a bullfighting event where they ultimately kill the bull.

Old Rough and Ready: nickname for Zachary Taylor (1784–1850), hero and military leader in the Mexican-American War, and later the twelfth president of the United States.

outriders: range riders; cowboys who had the duty of riding about the range and keeping a sharp lookout to spot trouble, or anything that might happen to the detriment of their employer. Outridings were inspection trips, and the outriders were commissioned to ride anywhere.

Pole Star: North Star; a star that is vertical, or nearly so, to the North Pole. Because it always indicates due north for an observer anywhere on Earth, it is important for navigation.

Pony Express: a former system in the American West of carrying mail and express by relays of riders mounted on ponies, especially the system operating (1860–1861) between St. Joseph, Missouri and Sacramento, California.

pulque: (Spanish) a thick alcoholic drink made in Mexico.

ramrod: a rod used for ramming down the charge in a gun that is loaded through the muzzle.

ring in: to introduce artfully or fraudulently.

sevens: reference to a crap game in which the player who rolls a seven on the first roll, wins.

spiggoty: a Spanish-speaking native of Central or South America who cannot command the English language. It is a mocking imitation of “no speaka de English.”

tin-pan peddler: a merchant who traveled around in a wagon selling an array of goods such as tin pans, utensils, washboards and anything a woman could use in her household. As there was very little hard cash on the frontier, the barter system prevailed and virtually anything could be traded, as long as both parties were satisfied.

vaquero: (Spanish) a cowboy or herdsman.