It is one of the greatest conflicts—and a pivotal turning point in history … the Chinese civil war. On one side stands Chiang Kai-shek and the Nationalists. On the other, Mao Zedong and the Communists. And their forces are about to meet in a decisive battle … the outcome of which is in the hands of one American pilot, John Hampton, a man who couldn’t care less….

He’s a mercenary, flying for the highest bidder, his only loyalty to himself and to cold hard cash. He has nothing to believe in, and nothing to lose. But just as this is a critical moment in history, so, too, is it about to become a defining moment in Hampton’s life.

What is the extraordinary experience that has the power to penetrate Hampton’s armor of cynicism and touch his heart? What is it that makes him see that there are things, other than money, that are worth fighting—and maybe even dying—for? The surprising answers spur him to undertake the ultimate mission in Red Death Over China.

Also includes the flying adventures “The Crate Killer,” in which a test pilot uses up his nine lives parachuting nine times from crumbling planes, only to discover that his tenth flight presents the biggest challenge of all; and “Wings Over Ethiopia,” the story of a pilot captured and accused of being a spy by both sides in a war—and his only means of escape is through the lens of a camera. 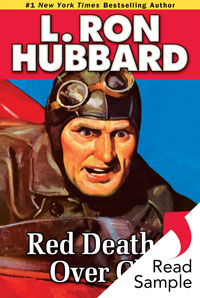 L. Ron Hubbard experienced China in the 1930s in a way few Westerners did. Traveling from the ports of the China Sea to Beijing to the Great Wall and onto the hills of Southern Manchuria, he came to know the land and its people—soldiers, spies, outlaws and monks—as well as any American could. It is that background that shines through in stories like Red Death Over China.

Addis Ababa: capital and largest city of Ethiopia. The modern city was founded in 1887 and is located in central Ethiopia. It was given the name Addis Ababa, which means “new flower,” by Emperor Menelik II who built his palace there. Since 1889 it has been the capital and residence of the emperor. From May 1936 until it was liberated in May 1941, the city was occupied by the Italian government.

Adwa: town located near the northern border of Ethiopia. In October 1935, Italian troops advanced from Eritrea, which at that time was an Italian colony north of Ethiopia, and captured Adwa.

Amharic: the official language of Ethiopia.

Asmara: largest city and capital of Eritrea, an independent state in East Africa. Eritrea is bounded on the east by the Red Sea, on the south and west by Ethiopia and on the north by Sudan. First established in 1890, Eritrea was an Italian colony between 1890 and 1941.

bolívars: coins and the monetary unit of Venezuela.

Bristol: two-seater fighter biplane of World War I, manufactured by the British and flown by the Royal Air Force until 1932.

camera guns: aircraft-mounted motion picture cameras that record the firing of the guns and their target line as aimed by the pilot.

Chaco: the Chaco War (1932–1935) was a border dispute fought between Bolivia and Paraguay over control of a great part of the Gran Chaco region of South America, which was incorrectly thought to be rich in oil.

Che peccato!: (Italian) What a pity!

Chiang: Chiang Kei-shek (1887–1975); served as leader of the Chinese Nationalist Party after the death of its founder in 1925. In 1927 civil war broke out between the Nationalist government and the Red Army led by Mao Tse-tung. In 1934, Chiang surrounded the Communists, but they broke out and began their Great Heroic Trek. In 1949 the Communists gained control of the Chinese mainland and Chiang retreated to Taiwan where he established a government in exile.

cowl: the removable metal housing of an aircraft engine, often designed as part of the airplane’s body, containing the cockpit, passenger seating and cargo but excluding the wings.

dixie: a mess tin or oval pot often used in camp for cooking or boiling (as tea).

Ethiopian War: war waged between Italy and Ethiopia from 1935 until 1941. In the early 1930s Italy controlled Eritrea and Somalia, two African nations that border Ethiopia on the north, east and southeast. After negotiations between the governments of Italy and Ethiopia broke down, Italian troops invaded Ethiopia in the north and captured the town of Adwa, which marked the start of the war.

greaseballs: workers who lubricate the working parts of a machine or vehicle.

Great Heroic Trek: also known as the Long March. In October 1934, the Communists, under the command of Mao Tse-tung, escaped annihilation by Chiang Kai-shek’s troops by retreating 8,000 miles (12,500 km) from southern China to Shensi over 370 days. The route passed through some of the most difficult terrain of China and the march was completed by only one-tenth of the force that started.

Greek Rebellion: Greco-Turkish War (1919–1922); war between Greece and Turkish revolutionaries. After World War I, the territories and peoples formerly under the Turkish Empire were divided into various new nations and territories. The Greek campaign was launched because western allies had promised Greece territorial gains at the expense of the Turkish Empire. It ended with Greece giving up all territory gained during the war, returning to its prewar borders.

hit the silk: parachute from an aircraft; bail out.

Ho una lettera: (Italian) I have a letter.

khat: a flowering plant native to tropical East Africa. It is a shrub or small tree with evergreen leaves, and contains an amphetamine-like stimulant that causes excitement and euphoria. The ancient Egyptians considered the khat plant a “divine food” and used the plant as a metamorphic process to transcend to a divine level, intending to make the user godlike.

Lewis: a gas-operated machine gun designed by US Army Colonel Isaac Newton Lewis in 1911. The gun weighed twenty-eight pounds, only about half as much as a typical medium machine gun. The lightness of the gun made it popular as an aircraft-mounted weapon, especially since the cooling effect of the high-speed air over the gun meant that the gun’s cooling mechanisms could be removed, making the weapon even lighter.

mushy stall: a situation in which the controls of an aircraft are sluggish or feel mushy and it is difficult to precisely control the plane. This is an indicator that the plane is in a stall or is about to stall. This can occur when the airspeed goes below what is needed for the airplane to maintain altitude.

Newton: Sir Isaac Newton (1643–1727); English mathematician and physicist. Famous for his laws of motion, which are laws concerning the relations between force, motion, acceleration, mass and inertia, and that govern the motion of material objects.

Rolls: an aircraft engine built by Rolls-Royce, a British car and aero-engine manufacturing company founded in 1906.

Shensi: a province of east central China; one of the earliest cultural and political centers of China and site of the conclusion of the Great Heroic Trek (also known as the Long March).

slip: (of an aircraft when excessively banked) to slide sideways, toward the center of the curve described in turning.

terminal velocity: the constant speed that a falling object reaches when the downward gravitational force equals the frictional resistance of the medium through which it is falling, usually air.

WACO: one of a range of civilian biplanes produced by the Weaver Aircraft Company of Ohio (WACO) from 1919 until the company stopped production in 1946. WACO biplanes were known to be reliable and rugged and were popular amongst traveling businessmen, postal services and explorers.

windsock: a fabric tube or cone attached at one end to the top of a pole to show which way the wind is blowing.

Yellow River: the second longest river in China, flowing through the north central part of the country.