Bat Conroy’s the world’s top war correspondent. Until the Japanese invasion of China, when an unknown writer, filing under the byline Perry Lane, scoops Bat on nearly every battle. Bat must stop Perry Lane or lose his exclusive on the biggest story of the war.

Bat Conroy—cut him and he’d bleed ink, he’s a born newspaperman. The greatest American journalists of the 20th century all made their names as war correspondents, but none of them would have beat out Bat Conroy to a good story.

Which makes it that much more mystifying—and aggravating—when an unknown writer, filing under the byline Perry Lane, scoops Bat on every story that comes along. Bat’s always been the go-to reporter covering the Japanese invasion of China … until this Perry Lane person came along to steal his thunder and maybe even his job.

Now, the biggest story of the war is about to hit the fan, and Bat’s going to get to the source first if it kills him. But the most shocking news of all is the true identity of the elusive Perry Lane. 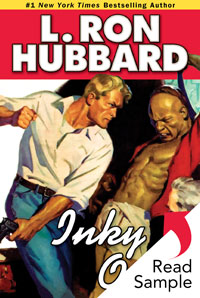 As a young man, L. Ron Hubbard visited Manchuria, where his closest friend headed up British intelligence in northern China. Mr. Hubbard gained a unique insight into the intelligence operations and spy-craft in the region as well as the hostile political climate between China and Japan—a knowledge that informs stories like Inky Odds.

bug: a high-speed telegrapher’s key that makes repeated dots or dashes automatically and saves motion of the operator’s hand.

Chiang Kai-shek: (1887–1975); military leader of the Chinese Nationalist Party that attempted to purge Communism from China and unite the country under one central government. Civil war broke out in 1927 between the Nationalist government and the Red Army led by Mao Tse-tung. China was also involved in intermittent conflicts with Japan since 1931, with full-scale war breaking out in 1937. In 1949, the Nationalist government’s power declined and Communist control ensued, forcing the Nationalists from mainland China into Taiwan.

dazzle-painted: something painted with dazzle camouflage; a camouflage paint scheme of complex geometric shapes in contrasting colors. Its purpose was not concealment but to make it difficult to estimate the target by creating a confusion with rangefinders that operated by lining up two half-images of the target. Dazzle camouflage was intended to make it hard to do this job because the clashing patterns would not look right in the rangefinder sights even when aligned.

dog bites man: the phrase comes from a quote attributed to New York Sun editor John B. Bogart (1845–1921): “When a dog bites a man, that is not news, because it happens so often. But if a man bites a dog, that is news.”

foredeck: the part of a ship’s deck between the bridge and the forecastle (the upper deck of a sailing ship, forward of the foremast).

godown: a warehouse; a commercial building for storage of goods.

Gulliver in Brobdingnag: refers to a satire, Gulliver’s Travels, by Jonathan Swift, in 1726. Lemuel Gulliver, an Englishman, travels to exotic lands, including Lilliput (where the people are six inches tall), Brobdingnag (where the people are seventy feet tall), and the land of the Houyhnhnms (where horses are the intelligent beings, and humans, called Yahoos, are mute brutes of labor).

holdout: playing cards hidden in a gambling game for the purpose of cheating.

Kalgan: a city in northeast China near the Great Wall that served as both a commercial and a military center. Kalgan means “gate in a barrier” or “frontier” in Mongolian. It is the eastern entry into China from Inner Mongolia.

Kawasaki: aircraft named after its manufacturer. Founded in 1918, Kawasaki built engines and biplanes in the 1930s, including fighters and bombers.

Legation Street: also known as the Legation Quarter; it was encircled by a wall and was a city within Peking exclusively for foreigners. It housed eleven foreign embassies and was off-limits to Chinese residents.

limber: a two-wheeled, horse-drawn vehicle used to tow a field gun or an ammunition box.

Mariveles: a town and the mountains located in the southern part of the Bataan Peninsula on Luzon, the chief and largest island of the Philippines.

Mindanao: the second largest and easternmost island in the Philippines.

monte: a card game in which two cards are chosen from four laid out face up, and a player bets that one of the two cards will be matched in suit by the dealer before the other one.

one-pounder: a gun firing a one-pound shot or shell. It looks somewhat like a miniature cannon.

Panay: USS Panay, a gunboat responsible for patrolling the Yangtze River to protect American lives and property. In 1937 Panay evacuated the remaining Americans from the city of Nanking after Japanese forces moved in on the city. While upstream the Panay was bombed and sunk, killing three men and wounding forty-three others. Japan claimed that they did not see the US flags painted on the deck of the gunboat, apologized and paid for loss and damages.

Route Army: a type of military organization exercising command over a large number of divisions. It was a common formation in China but was discarded after 1938.

steerageway: the minimum rate of motion sufficient to make a ship or boat respond to movements of the rudder.

tetrachloride bombs: white smoke bombs; such bombs are made from chemical compounds and are for use in signaling or screening.

Yangtze: Yangtze Kiang; the longest river in Asia and the third longest in the world, after the Nile in Africa and the Amazon in South America.

Zamboanga: province and port city in the Philippines, on the island of Mindanao.