Captain Spar is wrongfully imprisoned on Devil’s Island but makes a daring escape to the small island of Martinique—trailing his nemesis, the infamous Saint.

Wrongfully accused, Captain Spar has been condemned to suffer the brutality of the guards and the conditions on Devil’s Island. But they haven’t broken his will, and now, escaping, he has one mission in life: revenge. Spar’s out to kill the man who put him into the devil’s hands. But he’ll have to take on a gallery of rogues who are as treacherous as the waters of the Caribbean.

Pressure is rising and a storm is brewing. But even in the face of a natural disaster, Spar discovers that nothing is more volatile than human nature—as temptation and danger are about to collide with Hurricane force.

“Hurricane will keep you on the edge of your seat from beginning to end as it unfolds.” —Mommy’s Favorite Things 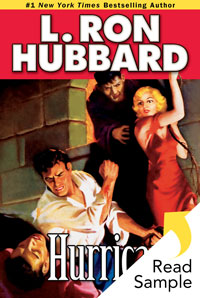 In 1937, L. Ron Hubbard wrote to one of his editors: “You might have noticed that I am intensely wary of becoming any kind of a story specialist. I have sold the gamut of types: air war, air, western, detective, love, terror. My one passion is to build a name for variety. I like my freedom. I fight hard for independent individualism. I love to tie into a yarn and make it blaze in print.” L. Ron Hubbard’s passion for writing, creativity and individualism certainly blazes across the page in stories like Hurricane.

Atlas Mountains: a mountain range in northwest Africa extending about fifteen hundred miles through Morocco, Algeria and Tunisia including The Rock of Gibraltar. The Atlas ranges separate the Mediterranean and Atlantic coastlines from the Sahara Desert.

Barbary Coast: the term used by Europeans, from the sixteenth until the nineteenth century, to refer to the coastal regions in North Africa that are now Morocco, Algeria, Tunisia and Libya. The name is derived from the Berber people of North Africa. In the West, the name commonly refers to the pirates and slave traders based there.

blighter: a fellow, especially one held in low esteem.

Brobdingnagian: of or relating to a gigantic person or thing; comes from the book Gulliver’s Travels of 1726 by Jonathan Swift, wherein Gulliver meets the huge inhabitants of Brobdingnag. It is now used in reference to anything huge.

Devil’s Island: an island in the Caribbean Sea off French Guiana and location of a notorious French penal colony, opened in 1854 and closed in 1946. Used by France, its inmates were everything from political prisoners to the most hardened of thieves and murderers. Conditions were harsh and many prisoners sent there were never seen again. Few convicts ever managed to escape.

dodger: a canvas or wood screen to provide protection from ocean spray on a ship.

Fort-de-France: the capital and largest city of Martinique, on the western coast of the island.

gingham dog and the calico cat: reference to a poem called “The Duel” by Eugene Field (1850–1895) about a gingham dog and a calico cat (both stuffed toys) who fought until they had eaten each other up and there was nothing left.

hawse: hawse pipe; iron or steel pipe in the stem or bow of a vessel, through which an anchor cable passes.

knot: a unit of speed, equal to one nautical mile, or about 1.15 miles, per hour.

lay to: to put a ship in a dock or other place of safety.

Martinique: an island in the eastern Caribbean; administered as an overseas region of France.

Moorish barb: a desert horse of a breed introduced by the Moors (Muslim people of mixed Berber and Arab descent) that resembles the Arabian horse and is known for speed and endurance.

old, my: used as a term of cordiality and familiarity.

Paramaribo: the capital and largest city of Dutch Guiana (now Suriname) in northern South America on the Atlantic Ocean.

put in: to enter a port or harbor, especially for shelter, repairs or provisions.

rudder: a means of steering a boat or ship, usually in the form of a pivoting blade under the water, mounted at the stern and controlled by a wheel or handle.

seacocks: valves below the waterline in a ship’s hull, used for admitting outside water into some part of the hull.

six strength: a wind strength with large waves and foam crests, some spray and winds at 25–31 miles per hour, as classified on the Beaufort scale created in 1805 by Sir Francis Beaufort.

slop chest: locker or chest containing a supply of clothing, boots, tobacco and other personal goods for sale to the crew of a ship during a voyage.

telegraph: an apparatus, usually mechanical, for transmitting and receiving orders between the bridge of a ship and the engine room or some other part of the engineering department.

tender: a small boat used to ferry passengers and light cargo between ship and shore.

three sheets to the wind: in a disordered state caused by drinking; intoxicated. This expression is generally thought to refer to the sheet (a rope or chain) that holds one or both lower corners of a sail. If the sheet is allowed to go slack in the wind, the sail flaps about and the boat is tossed about much as a drunk staggers. Having three sheets loose would presumably make the situation all the worse.

wing: bridge wing; a narrow walkway extending outward from both sides of a pilothouse to the full width of a ship.