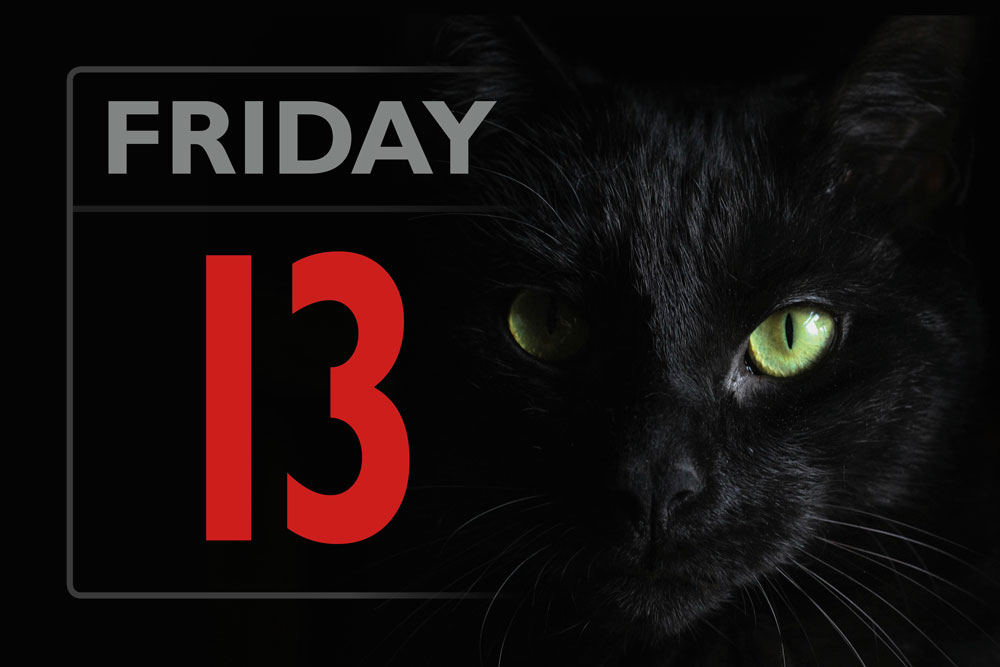 Scared of Things That Go Bump in the Night?

If so, you are not alone. People fear what they don’t know or don’t understand and that includes things that go bump in the night—a fear that goes back to the beginning of recorded history.

According to the article “Superstitions and Their Origin,” early man believed that every phenomenon of nature was the work of a spirit or a devil as he could not intelligently fathom any other explanation. To this was added fear. The thunder, the lightning, the earthquake and darkness, all filled him with fearful dread. To him these were the workings of spiteful powers to be propitiated. It is not surprising that during the Dark and Middle Ages, when people were for the most part illiterate, superstition flourished.

Although no longer seemingly applicable, a number of superstitions have hung around to this day. People in the US, UK and parts of Europe believe that “13” is an unlucky number and “Friday” an unlucky day. So, long before the popular Friday the 13th movie franchise, this day had a really bad reputation.

In fact, plenty of people are so fearful that something awful is going to happen to them on Friday the 13th that they avoid traveling, doing normal activities, or even making major purchases. According to the founder of the Stress Management Center and Phobia Institute in Asheville, North Carolina, “It is estimated that $800 or $900 million is lost in business on this day because people will not fly or do business they would normally do.”

This particular phobia is called Paraskevidekatriaphobia, which is certainly a mouthful. The term comes from the Greek word Paraskevi for Friday + dekatreís for thirteen + phobia. Suffice it to say that “fear of Friday the 13th” is easier to say and remember, not to mention it’s a much better name for a horror flick.

This short video by Stuart Vyse, directed by TED-Ed, traces some of the origins of common superstitions that are still around today.

In this age of scientific knowledge and breakthroughs—such as the advent of AI and corporations vying to be the first to land on Mars—it seems incongruous that superstition would still hold a grip on society. But it does. According to a survey done by Gallup Poll 25% of Americans are superstitious. That’s 1 out of every 4 adults or an estimated 63 million people.

Fear Is the Mind Killer

Franklin Delanor Roosevelt made the phrase “The only thing we have to fear is fear itself” famous in his inaugural speech. Even the king of horror and dark fantasy, Stephen King has stated that “Fear is the emotion that makes us blind.”

Would that imply then, that if one isn’t afraid of demons, evil spirits, and things that go bump in the night that they won’t be harmed by them?

In L. Ron Hubbard’s dark fantasy novel Fear, the author tackles this idea head on as he pits scientific rationality against superstition. The premise is intriguing and the outcome is unexpected. 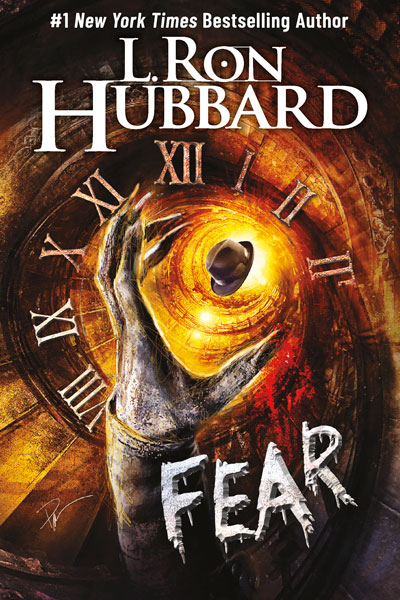 The story centers on Professor James Lowry, a well-respected ethnologist and faculty member of Atworthy College with a beautiful and devoted young wife. Life is good for Lowry. That all changes, however, when he publishes an article denying the existence of devils and demons and even goes so far as to offer his head in a basket to the person who can show him a bonafide demon. The controversial article results in him being fired.

Lowry can’t bear to tell his wife the bad news, so he goes to the home of his best friend, Tommy Williams, to seek solace. Tommy is a self-proclaimed believer in demons and knows well that evil lurks in the world and he is quick to point out that it would appear the spirits Lowry has offended have won the first round. Tommy’s advice to Lowry is to recant his article. Lowry rejects that idea as both unscientific and absurd, and so leaves.

Before reaching home Lowry inexplicably loses four hours of his life and his hat. This starts him wondering if there might not be some truth in the ideas he has so boldly mocked. As he becomes more and more obsessed with finding what happened during those lost hours, he slowly descends into a world of the macabre. The more he digs, the stranger the encounters. All the while, he is being discouraged from his quest and warned: “If you find your hat you’ll find your four hours. If you find your four hours then you will die.…”

Ray Bradbury called the novel “a true scare” and Stephen King wrote it was “a classic tale of creeping, surreal menace and horror. This is one of the really, really good ones.” In that light, L. Ron Hubbard puts this caution at the beginning of the book for all his readers:

“There is one thing which I wish the reader could keep in mind throughout, and that is: this story is wholly logical, for all that will appear to the contrary. It is not a very nice story, nor should it be read alone at midnight—for it is true that any man might have the following happen to him. Even you, today, might lose four hours from your life and follow, then, in the course of James Lowry.”

Advice well worth heeding if you are scared of things that go bump in the night.

Danger in the Dark 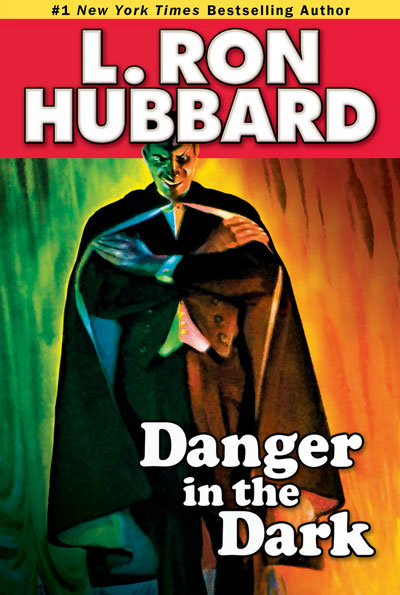 After Billy Newman strikes gold while mining in the Philippines, he believes Lady Luck favors him so much that he buys his own South Seas island for a bargain price … or so he thinks. But when the natives fall ill from plague and crops start failing, the tribal chiefs blame Billy for angering the local god Tadamona. The scared chiefs give Billy one day to get rid of the ill fortune that has cursed the island, or they will sacrifice a beautiful young girl to appease Tadamona. Desperate, Billy denies that the deity even exists and dares Tadamona to show himself. Not only does Billy get his wish, he draws a beastly wrath upon the entire island.

As a teen, Ron traveled the South Seas and during his stay on Guam learned of the local superstition that is the basis of his story Danger in the Dark. In a diary ledger from 1927, he wrote:

The superstitions are intensely interesting. The “great cheese ghost” is named “Tadamona.” He is supposed to dwell on “Missionary Point” and to ramble around after midnight. He has a man shape at times and attains the height of the cocoanut trees. Again he is seen in the form of a beautiful woman. The former brings sickness and disease, and the latter good luck.

Everyone knows that a black cat crossing your path is bad luck, but what of an arrogant alley cat? Jacob Findley is about to find out.

Jacob Findley is a defeated, resigned civil servant, who has been bottling up insults for many years and is at the breaking point. Added to this, he doesn’t like cats. When a proud, mangy cat crosses his path, Jacob vents his frustration on the unsuspecting feline and with one swift kick, sends it to a gruesome death under the wheels of a passing car. Unfortunately for Jacob, he soon discovers that his hatred of cats and the killing of this particular cat, turns his life into a waking nightmare that, even in sleep, he can’t escape.

“He Didn’t Like Cats” is available in the title, Danger in the Dark.

It was Edward Larson’s twenty-second day in an open boat somewhere south of that ironically named place, the Cape of Good Hope. The last of his fellow shipmates had committed their souls to Old Man Sea, leaving Larson all alone. Just as he is about to give up all hope, the crew of a spectral clipper ship—a relic of far-gone days—rescues him.

Larson is invited to dine with the Captain who informs Larson that he and his faceless crew have been doomed to sail the seas. Their only chance of reaching safe harbor comes once every seven years when the Dark One appears and challenges him to a game of dice. Larson well knows that if the Captain loses his next game of dice … that he, too, is doomed.

“The Devil’s Rescue” is a twist on the tale of the Flying Dutchman. This haunting short story is available in the title The Crossroads.

Watch the live radio-theatre performance of the story here starring Jim Meskimen (the voice of Ultron in “Avengers Assembled”) as the solo narrator and David Campbell (multiple Grammy and Oscar winning composer) accompanying on violin.