Farmer Eben Smith heads off to the big city to trade his wagonload of produce. But he barters a lot more than goods after he stumbles across a crossroads in time, bargains with different cultures in alternate realities, and accidentally wreaks havoc and chaos in each.

Farmer Eben Smith is fed up with big government telling him how to run his life and his business. They pay him to bury his crops while folks starve in the streets, and he’s not going to take it anymore. He’s declaring his independence, loading up his fruits and vegetables, and heading for the city to wheel and deal.…

But before he can trade in his turnips, Eben’ll have to deal with something bigger—a break in the space/time continuum. He’s at The Crossroads, where reality is turned upside-down and inside out. And before it’s over, he’ll turn his turnips into liquor, and the liquor into guns and gold, as he plunges into strange new worlds … finding ways to wreak havoc in all of them.

Also includes the fantasy adventures, “Borrowed Glory,” the haunting story of two immortals who wager on two mortals given a single day of love … a wager that leads to heartbreak and tragedy; and “The Devil’s Rescue” based on the legend of The Flying Dutchman, in which the sole survivor of a disaster at sea is “rescued” by the devil himself and finds that fate rests on a roll of the dice. 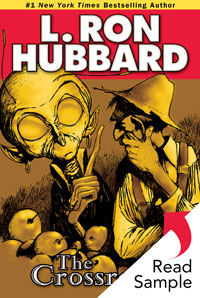 The Crossroads first appeared in the February 1941 issue of Unknown Fantasy Fiction. By then L. Ron Hubbard’s stature as a writer was well established. As author and critic Robert Silverberg puts it: he had become a “master of the art of narrative.” Mr. Hubbard’s editors urged him to apply his gift for succinct characterization, original plot, deft pacing, and imaginative action to a genre that was new, and essentially foreign, to him—science fiction and fantasy. The rest is history.

AAA: Agricultural Adjustment Administration; former US government agency established in 1933 under President Franklin Roosevelt. Its purpose was to help farmers by reducing the production of certain common crops, thus raising farm prices and encouraging more diversified farming. Farmers were given benefit payments in return for limiting acreage given to common crops. The agency also oversaw a large-scale destruction of existing crops and livestock in an attempt to reduce surpluses. In 1936, the Supreme Court declared the AAA as unconstitutional.

Astor: Hotel Astor; located between Forty-fourth and Forty-fifth streets on Broadway, the Astor brought New Yorkers, as well as the world, in droves to what would soon be Times Square. Its design combined a number of different artistic styles and was meant to approximate the luxurious European spas and resorts.

athwartship: across a ship from side to side.

auks: a name given to various species of Arctic sea birds having a chunky body, short wings and webbed feet.

bolero: a jacket ending above or at the waistline, with or without collar, lapel and sleeves, worn open in front.

bowline on the bight: a bowline knot (a loop knot that neither slips nor jams) with a double loop tied in the bight (middle or slack part) of a rope.

bucko mate: the mate of a sailing ship who drives his crew by the power of his fists.

Cape Town: capital of the Republic of South Africa. A port city founded in the seventeenth century as a stopover for ships plying the Europe-to-India route.

chronometer: an instrument for measuring time accurately in spite of motion or varying conditions.

Confederate: of or pertaining to the Confederate States of America (1861–1865), the government established by eleven Southern states of the US after their secession from the Union. At the onset of the Civil War, the Confederate government issued its own currency which at first was accepted throughout the South as a medium of exchange. The money lost all value when the Confederacy ceased to exist as a political entity at the end of the war.

cracky, by: an exclamation used to express surprise or to emphasize a comment.

Flying Dutchman: the name of the cursed spectral ship on an endless voyage, trying to round South Africa, the Cape of Good Hope, against strong winds and never succeeding. It has been the most famous of maritime ghost stories for more than 300 years.

founder: to sink below the surface of the water.

giddap: alteration of “get up”; used as a command to a horse to start moving.

goldurned: goddamned; used as an expression of anger, disgust, etc.

gum, by: an exclamation of surprise.

hard lines: that’s tough; something that one says in order to express sympathy for someone.

HOLC: Home Owners’ Loan Corporation; an agency established in 1933 under President Franklin Roosevelt. Its purpose was to refinance homes to prevent foreclosure (the action of taking property that was bought with borrowed money, because the money was not paid back as formally agreed). The HOLC made about 100 million low-interest loans between June of 1933 and June of 1936.

lying to: stopping with the vessel heading into the wind.

marlinespike: a tool made from wood or metal, and used in rope work for tasks such as untwisting rope for splicing or untying knots that tighten up under tension. It is basically a polished cone tapered to a rounded point, usually six to twelve inches long, although sometimes it is longer.

newfangled: of the newest style or kind.

Old Glory: a common nickname for the flag of the US, bestowed by William Driver (1803–1886), an early nineteenth-century American sea captain. Given the flag as a gift, he hung it from his ship’s mast and hailed it as “Old Glory” when he left harbor for a trip around the world (1831–1832) as commander of a whaling vessel. Old Glory served as the ship’s official flag throughout the voyage.

poop: poop deck; a deck that constitutes the roof of a cabin built in the aft part of the ship. The name originates from the Latin puppis, for the elevated stern deck.

quarterdeck: the rear part of the upper deck of a ship, usually reserved for officers.

range light: two white lights carried by a steamer to indicate her course.

RFD: Rural Free Delivery; the service by which the United States Postal Service delivers mail directly to residents in rural areas. Prior to its establishment, the residents of rural America had to travel to the nearest post office to get their mail or pay private companies to deliver it.

running light: one of the lights carried by a ship at night and comprising a green light on the starboard side, a red light on the port side, and on a steamer a white light at the foremast head.

schooner’s house: a structure rising above the deck of a schooner that encloses the bridge.

snuffbox: a box for holding snuff, especially one small enough to be carried in the pocket. Snuff is a preparation of tobacco, either powdered and taken into the nostrils by inhalation, or ground and placed between the cheek and gum.

spavined: suffering from, or affected with, a disease of the joint in the hind leg of a horse (corresponding anatomically to the ankle in humans) where the joint is enlarged because of collected fluids.

sprit: a small pole running diagonally from the foot of a mast up to the top corner of a fore-and-aft sail, to support and stretch it.

squaresa’ls: square sails; four-cornered sails suspended from the ship’s horizontal yards, long rods mounted crosswise on a mast that support and spread the sails. Square sails are on tall ships, which are called “square riggers.”

t’gal’nts: topgallants; the mast or sail above the mainmast, or mainsail in a square-rigged ship.

truck: vegetables raised for the market.

WPA: Works Projects Administration; former US government agency established in 1935 under President Franklin Roosevelt when unemployment was widespread. The goal of the WPA was to employ most of the people on relief on useful projects until the economy recovered. WPA’s building program included the construction of 116,000 buildings, 75,000 bridges, 651,000 miles (1,047,000 km) of road and the improvement of 800 airports.