In Ketchikan, Alaska, FBI Agent Bill Norton discovers an heiress to a bankrupt fishing fleet and a string of corpses dismissed as “accidental drownings” … all leading him to a murderous heroin smuggling ring.

Chee-Chalker: a newcomer to Alaska and the Klondike; an Indian word meaning one who is inexperienced or has no knowledge; a tenderfoot.

Bill Norton might be new to Ketchikan but he’s no tenderfoot. In fact, he’s one of the sharpest FBI agents this side of the Yukon—savvy, tough and resourceful.

Norton’s come to this rough-and-tumble town to look into a case of a missing person—his own boss—who vanished investigating a heroin smuggling operation. What Norton finds is a string of corpses, a gallery of rogues, and a fleet of fishing boats that specialize in red herrings. He also finds himself warming up to the heart-stopping halibut heiress Elaine Halloway.

But is Elaine mixed up in the heroin trade … or a victim of it? To find the truth Norton will have to make living men sweat—and dead men talk. Because every body fished out of the icy waters has a story to tell, and it will take all of Norton’s CSI-like skills to squeeze it out of them. 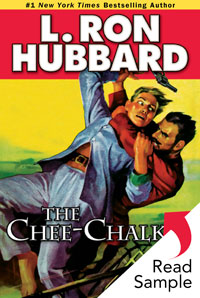 L. Ron Hubbard wrote The Chee-Chalker in 1940 while on his Alaskan Experimental Radio Expedition. One of its main purposes was to test an experimental radio navigation system enabling the user to locate the source of radio transmissions. While in Ketchikan, Ron used this equipment to assist the US Army Signal Corp, Coast Guard, and local FBI. In the process, he helped uncover a Nazi saboteur who had invented a device to interfere with radio transmissions between Alaska and the continental United States. So it’s not surprising that a radio station plays a significant role in this story.

button, on the: a blow on the tip of the chin; jawbreaker; a hard blow that usually causes a knockout.

Colt Frontiersman: Colt Frontier Six-Shooter; a .44-caliber, single-action revolver made by the Colt Firearms Company, established in 1847 by Samuel Colt (1814–1862). The Colt Frontier was originally made to be compatible with .44-caliber “Winchester Central Fire” cartridges, a cartridge that was commonly used in Winchester rifles.

eyes of the ship: the forwardmost portion of the topmost deck of a ship, as far forward as a person can stand. The name comes from the ancient Chinese custom of painting eyes on each bow so that the ship could see where she was going.

fo’c’s’le head: forecastle head; the part of the upper deck of a ship at the front. The forecastle is the front of a ship, from the name of the raised castlelike deck on some early sailing vessels, built to overlook and control the enemy’s deck.

forepeak: the interior part of a boat or ship nearest the bow.

fulminate of mercury: a gray crystalline powder that when dry explodes under percussion or heat and is used in detonators and as a high explosive.

fusel oil: an acrid oily liquid occurring in insufficiently distilled alcoholic liquors. Used especially as a source of alcohols and as a solvent.

gurdy: a reel with a crank used to pull in fishing nets on a boat.

Mickey: Mickey Finn; a drug-laced drink given to someone without their knowledge in order to incapacitate them. Named after a bartender who, before his days as a saloon proprietor, was known as a pickpocket and thief who often preyed on drunken bar patrons.

muskeg: a swamp or bog formed by an accumulation of moss, leaves and decayed matter resembling peat.

seine boat: fishing boat; a boat specially constructed to carry and utilize a seine, a large net. One edge of the net is provided with sinkers and the other with floats. It hangs vertically in the water and when its ends are brought together or drawn ashore it encloses the fish.

Sitka: a port city in the southern part of Alaska, on the Pacific Ocean.

Siwash: a North American Indian of the Pacific Northwest, Northwest Canada and Alaska.

thirty-thirty or .30-30: Winchester model 1894 rifle that is chambered to fire a .30-30 cartridge, the first North American sporting cartridge designed for use with smokeless powder. The .30-30 is a .30-caliber cartridge that was originally loaded with 30 grains of the new smokeless powder, which is the source of its name.

Tongass Narrows: the channel of water that runs between Ketchikan and Gravina Island, located in the southern part of Alaska. Tongass Narrows is Ketchikan’s “main street” and is used by cruise ships, commercial tugs, fishing boats and floatplanes.

Uncle Sam: the cartoon embodiment of the government of the United States of America beginning in the first part of the nineteenth century. The initials US, of Uncle Sam, were also taken to stand for “United States.”

well deck: space on the main deck of a ship lying at a lower level between the bridge and either a raised forward deck or a raised deck at the stern that usually has cabins underneath.