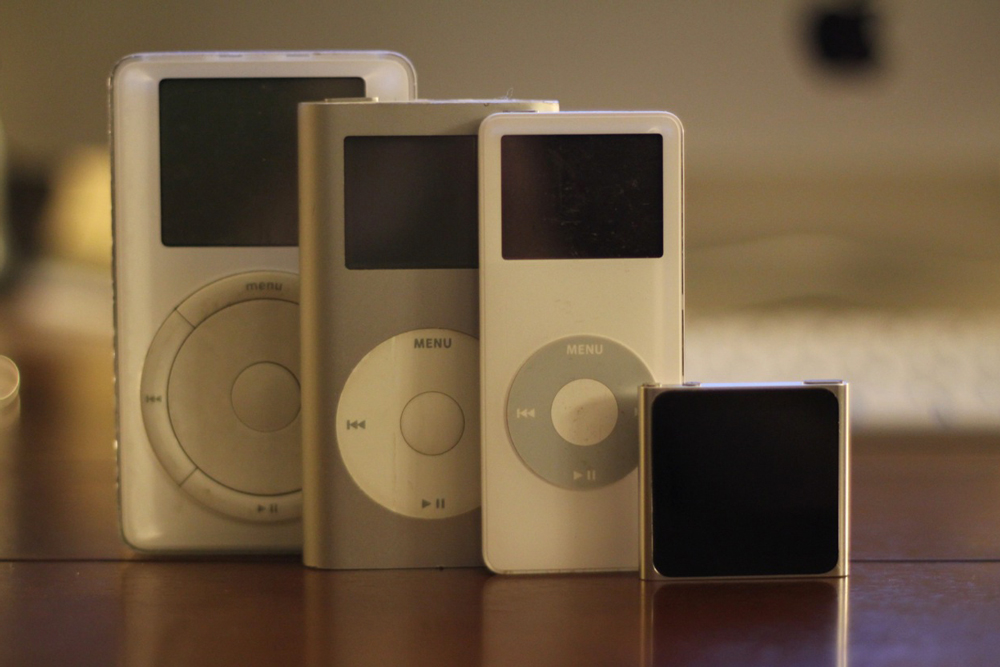 In celebration of National iPod Day (October 23) and the anniversary of its first sale (November 10), we surveyed and looked to see how sci-fi authors predicted and set the course of events for the Apple iPod, iPad, earbuds and other similar products.

These devices all have one thing in common: Inspiration from some of the best sci-fi books written. Or rather, from the authors of those works. Books have yet to write themselves. Yet.

The EVA (Extravehicular Activity Pod)―e(va)Pod―in 2001: A Space Odyssey. The “e(va)Pod” was the inspiration for an Apple freelance copywriter (Vinnie Chieco) who came up with the name “iPod” when he saw the original prototype.

Similar? Look for yourself. 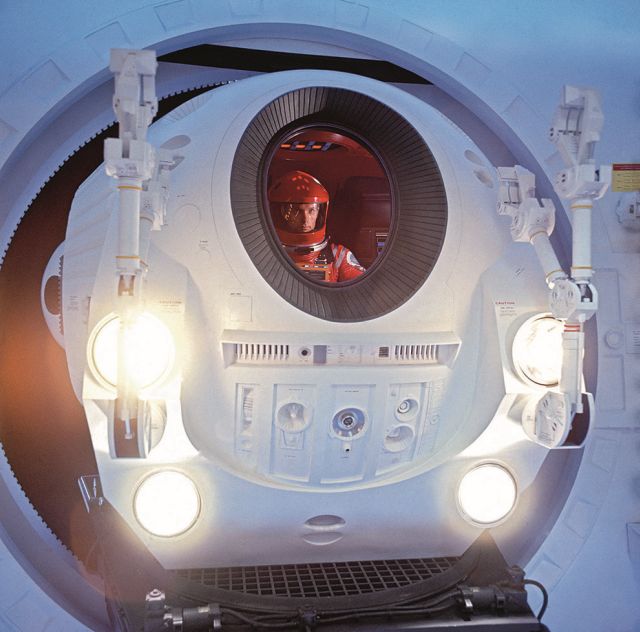 The inspiration for the turning wheel on the iPod came from a Bang & Olufsen phone (BeoCom 6000).

This phone used sound to echo the turn of the wheel which was copied by Apple. 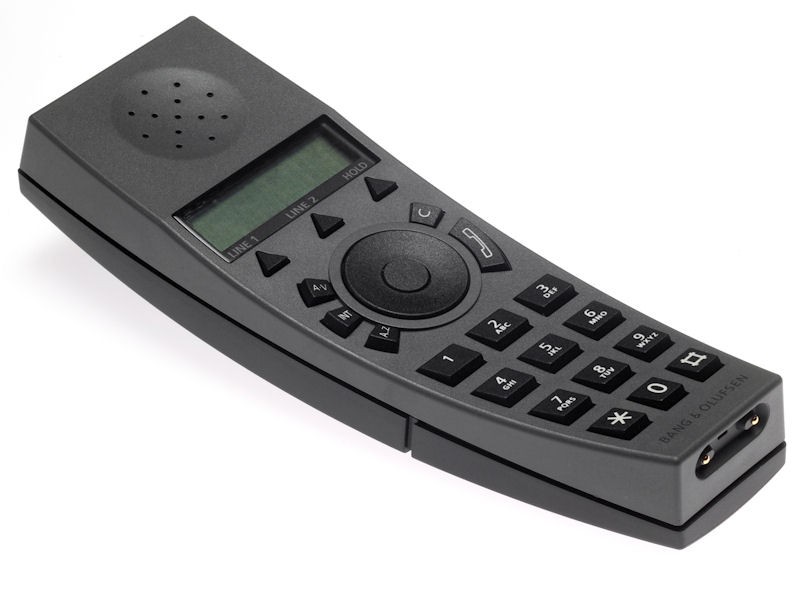 As for the device itself, the closest we have come to a prediction is from Ray Bradbury’s best dystopian novel, Fahrenheit 451. Herein the author covers both the concept of an iPod player and the earbuds: “His wife stretched on the bed, uncovered and cold, like a body displayed on the lid of a tomb, her eyes fixed to the ceiling by invisible threads of steel, immovable. And in her ears the little seashells, the thimble radios tamped tight, and an electronic ocean of sound, of music and talk and music and talk coming, coming in on the shore of her unsleeping mind.”

The Walkman, a precursor to the iPod, was also inspired by this work of science fiction. In a candid interview with Ray Bradbury in 1995, he stated “… when a bright Sony inventor read about my seashell radios in that novel, he invented the Walkman. That was a good thing to emerge from that book─the banishment of most picnic-ruining ghetto blasters.”

The most agreed upon inspiration for the iPad is Arthur C. Clark’s 2001: A Space Odyssey, published in 1968. He wrote the book based on his short story, “The Sentinel,” at the same time the movie was being developed by Stanley Kubrick.

In the book, the “iPad” is described as a “foolscap-sized Newspad.” It was used by astronauts when checking spaceship diagnostics and when they needed a communication line to Earth or the latest news stories from Earth. From the novel: “Floyd sometimes wondered if the Newspad and the fantastic technology behind it, was the last word in man’s quest for perfect communications. Here he was, far out in space, speeding away from Earth at thousands of miles an hour, yet in a few milliseconds he could see the headlines of any newspaper he pleased.”

There are other theories and certainly other sci-fi authors who have predicted the tablet and mini computer in some form, as listed below.

While the concept of having earbuds and a personal “radio” originated from Fahrenheit 451, Jonathan Ive, Apple’s chief designer, told J.J. Abrams that his inspiration for the design of the Apple earbuds came from the Star Wars’ Stormtroopers.

Similar? Look for yourself! 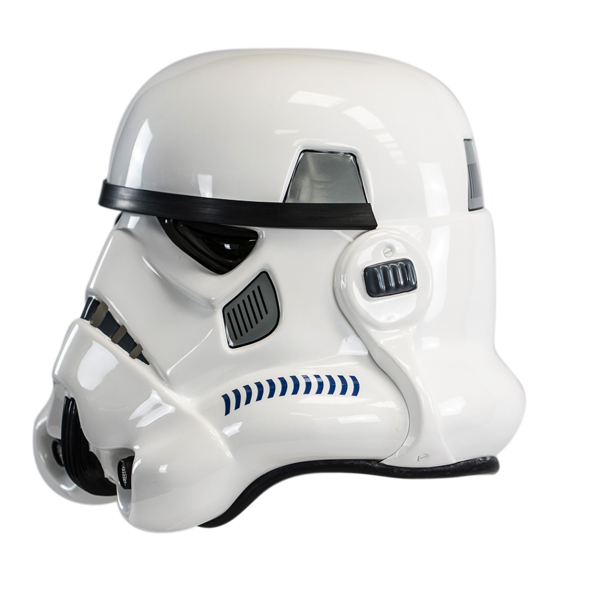 We then asked a selection of sci-fi fans: “Do you know of any sci-fi novels or short stories that predicted the iPod or iPad or any similar device?” The above-mentioned books came up, but so did a host of other sci-fi novels, short stories, and even comics, summarized below.

The Dick Tracy watch was introduced by Chester Gould: “This is a most remarkable bit of perfection─A Two-Way Radio. It both sends and receives.”

While the iPhone watch has been in circulation for several years, the true to the original Dick Tracy watch just recently became science fact:

“The Fun They Had,” a short story by Isaac Asimov, is set in 2157 and speculates about “telebooks” and features students joking about the discovery of this ancient artifact: a yellow, crinkly printed book. “It was awfully funny to read words that stood still instead of moving the way they were supposed to on a screen.” And when they turned back to the page before, it had the same words printed on it that it had when they read it the first time.

“The Feeling of Power” a short story by Isaac Asimov. “The congressman took out his pocket computer, nudged the milled edges twice, looked at its face as it lay there in the palm of his hand, and put it back.”

The Fourth World comics by Jack Kirby in which he created the “Mother Boxes.” They were thought to be portable, sentient, miniaturized supercomputers. They usually communicated with a repetitive “ping!” (Sound familiar?) 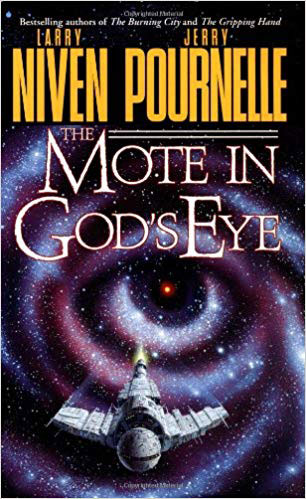 The Mote in God’s Eye by Jerry Pournelle and Larry Niven describes pocket computers that you could write on and talk to. “Suddenly he took out his pocket computer and scribbled madly across its face. Words and numbers flowed across the surface, and he nodded.” 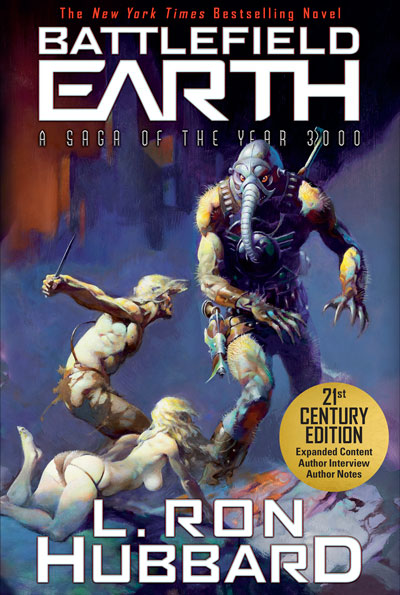 This is what is now the Apple iBooks, Amazon Kindle, and Audible apps.

Or, taking it a step further, Zombies, Run! the app which incorporates audio storytelling, gamification, and GPS-based fitness tracking. Users listen to dramatic audio stories while running 10% faster in intervals to avoid roaming zombie herds (in your head). 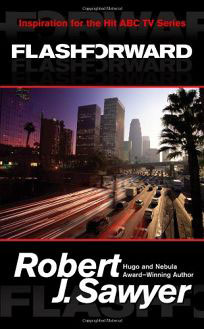 Flashforward by Robert J. Sawyer imagined going into a bookstore to order an out of print book from a digital catalog and then sipping coffee while waiting for the book to be printed in the back room of the bookstore. Albeit not an iPad or an iPod, a decade later, when launching his novel Watch, Sawyer stood in a bookstore in front of just such a device, known as the Espresso Book Machine with a digital catalog of almost five million titles.

As creators and authors continue to predict and imagine new technology, inventors and scientists continue to figure out how it can be done in the real world.

“Science fiction does not come after the fact of a scientific discovery or development. It is the herald of possibility. It is the plea that someone should work on the future. Yet it is not prophecy. It is the dream that precedes the dawn when the inventor or scientist awakens and goes to his books or his lab saying, ‘I wonder whether I could make that dream come true in the world of real science.'” ─from the Introduction to Battlefield Earth by L. Ron Hubbard

Nobody can properly predict exactly what the future will bring. However, by extrapolation, were we to nurture our sci-fi authors to postulate, imagine and write constructive and positive futures, we would have a better tomorrow.

If you know of any sci-fi books or short stories that we missed, we would love to get your comments and suggestions.

What Is It Like to Watch a Movie With Your Ears?

L. Ron Hubbard Predicted the Kindle–Nearly 25 Years Before Its Invention

A Short History of the Birth of Sci-Fi

What if sci-fi writers really did have it right on aliens?