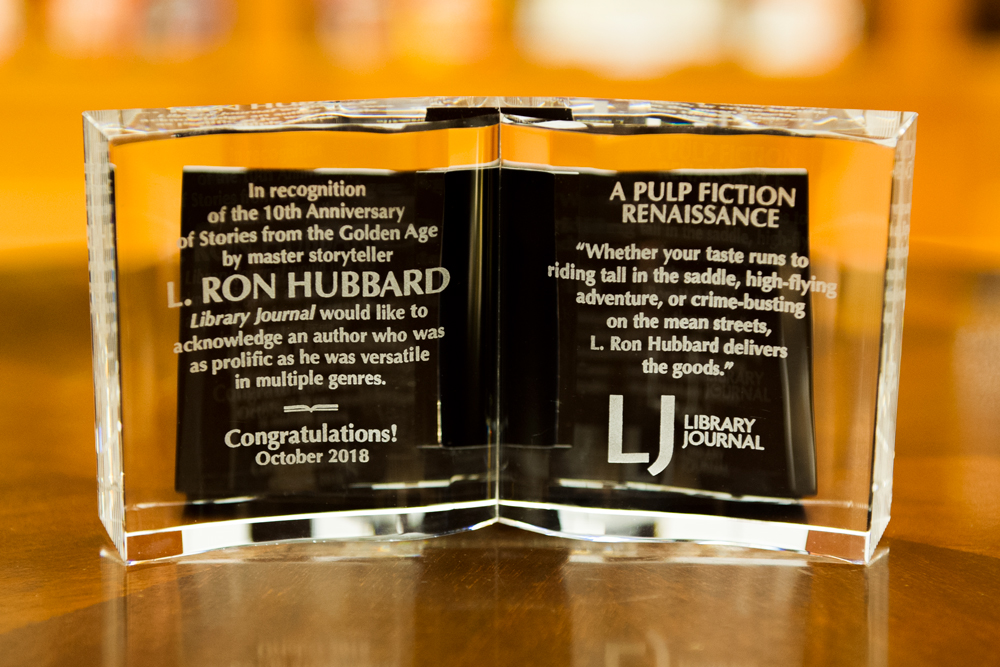 Library Journal Magazine Recognizes L. Ron Hubbard and the Pulp Fiction Renaissance in the Stories from the Golden Age

Library Journal Magazine recognized L. Ron Hubbard and the enduring quality of his Stories from the Golden Age with an elegant crystal book revealed at the Hollywood 10th-Anniversary celebration. The etched message read, “Library Journal would like to acknowledge the author who was as prolific as he was versatile in multiple genres.”

The significance of this recognition becomes clear when one realizes the impact the library market has on the publishing industry. The American Library Association reported that public libraries, some 9,000 in number, accounted for $1.3 billion in revenue for book and audiobook collections, separate from institutional, school and private libraries.

“We received over a dozen great reviews on our Stories from the Golden Age line of books from Library Journal,” stated John Goodwin, President Galaxy Press, “a testament to the enduring quality of L. Ron Hubbard’s stories.” Library Journal is a magazine for librarians, founded in 1876 by Melvil Dewey (familiar as the inventor of the Dewey decimal system).

The crystal book inscription included a review of the air adventure story, Trouble on His Wings, which sums up their perspective on the series, “Whether your taste runs to riding tall in the saddle, high-flying adventure, or crime-busting on the mean streets, L. Ron Hubbard delivers the goods.”

Stories from the Golden Age contain 153 stories written by L. Ron Hubbard that have been published in 80 volumes, in a wide spectrum of genres, including adventure, western, mystery, detective, fantasy, science fiction, and even some romance, using his own and 15 pen names.

For more information about the Stories from the Golden Age, go to galaxypress.com/goldenagestories.