American pilot Mike Malloy enlisted in the French Foreign Legion only to get himself thrown into a Moroccan military jail for trying to swab a deck with a general’s aide. To get out of prison and clear his name, Malloy undertakes a suicide mission: to fly deep into enemy territory and find an alchemist’s book missing for 800 years, a discovery that may determine the destiny of a nation.

American pilot Mike Malloy has learned his lesson: when you join the French Foreign Legion, it’s best not to wipe the floor with two French officers … no matter how richly they deserve it. And it appears he has all the time in the world to think about it. He’s been sentenced to five years in a Moroccan penal battalion—which is French for death sentence.

But Malloy is about to get a reprieve … if he’s willing to fly into the heart of the Sahara and into the teeth of a Berber rebellion.

It’s an offer Malloy can’t refuse. All he has to do is fly two passengers into the desert and return with a book that disappeared 800 years ago. But as he’s a man who doesn’t go by the book, this expedition could turn out to have unexpected benefits. One of his passengers is a young American woman whose eyes are as beautiful and blue as the wild blue yonder. 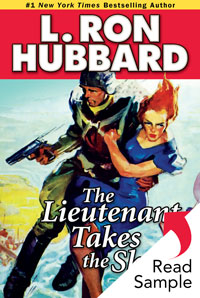 L. Ron Hubbard once said that writers too often “forget a great deal of the languorous quality which made The Arabian Nights so pleasing. Jewels, beautiful women, towering cities filled with mysterious shadows, sultans equally handy with robes of honor and the beheading sword … these things still exist, undimmed, losing no luster to the permeating Occidental flavor which reaches even the far corners of the earth today.” Mr. Hubbard brings this unique insight to his stories of North Africa and the Legionnaires, investing them with an authenticity of time, place, and character that kept his readers asking for more.

The Lieutenant Takes the Sky Glossary

Bedouin: a nomadic Arab of the desert regions of Arabia and North Africa.

bracket: to place (shots) both beyond and short of a target.

caravanserai: a roadside inn where travelers could rest and recover from the day’s journey. Caravanserais supported the flow of commerce, information and people across the network of trade routes covering Asia, North Africa and southeastern Europe. Typically it was a building with a square or rectangular walled exterior, and a single doorway wide enough to permit large or heavily laden beasts, such as camels, to enter. The courtyard was almost always open to the sky, and the inside walls of the enclosure were outfitted with a number of identical stalls, bays and niches or chambers to accommodate merchants and their servants, animals and merchandise.

Colt: revolver manufactured by the Colt Firearms Company, founded in 1847 by Samuel Colt (1814–1862), who revolutionized the firearms industry with the invention of the revolver.

damascene: metal, such as iron or steel, decorated with wavy patterns of etching or inlays of precious metals, especially gold or silver.

djellaba: a loose-hooded cloak of a kind traditionally worn by Arabs.

emplacement: a prepared position for weapons or military equipment.

foil: airfoil; any surface (such as a wing, propeller blade or rudder) designed to aid in lifting, directing or controlling an aircraft by using the current of air it moves through.

Four Hundred, the: the wealthiest and most exclusive social set of a community.

Hadith: one who follows the way of life prescribed for Muslims on the basis of the teachings and practices of Muhammad and interpretations of the Koran.

Ibn Tumart: (1080–1130) Berber religious teacher and founder of the ruling dynasty of the twelfth century in the region that is now Morocco. He founded a monastery in the Atlas Mountains that served as an important religious center. It is also his burial site.

Irish Guard: Irish Legion of the French Army, created by Napoleon in 1803 with the intention of invading the British Isles. Irish nationalists saw the Irish Legion as a means of liberating Ireland from British rule and so many enlisted. When the planned invasion did not take place, some of the Irishmen quit though the greater majority remained and fought for Napoleon with distinction. At his coronation in 1804, Napoleon presented the Irish Legion with an eagle (bronze eagle sculpture mounted on top of the blue regimental flagpole), the only one he ever entrusted to a foreign corps, along with their own flag. In 1813, after seeing firsthand the fighting valor of the Irish Legion in battle, he granted them the honor of guarding him.

Karaouine University Library: university in Fez, Morocco, founded in 859 and one of the oldest universities in the world. It is associated with the city’s giant mosque and is considered one of the most important centers of learning in North Africa.

Légions Étrangères: (French) Foreign Legion; a specialized military unit of the French Army, consisting of volunteers of all nationalities assigned to military operations and duties outside France.

Lewis gun: a gas-operated machine gun designed by US Army Colonel Isaac Newton Lewis in 1911. The gun weighed twenty-eight pounds, only about half as much as a typical medium machine gun. The lightness of the gun made it popular as an aircraft-mounted weapon, especially since the cooling effect of the high-speed air over the gun meant that the gun’s cooling mechanisms could be removed, making the weapon even lighter.

ma foi: (French) my faith; an exclamation used to emphasize an accompanying remark or to express surprise, etc.

Middle Atlas: part of the Atlas Mountain range lying in Morocco. It is the westernmost of three Atlas Mountain chains that define a large plateaued basin extending eastward into Algeria.

Monte Carlo: a town of Monaco on the Mediterranean Sea and the French Riviera. It is a noted resort famed for its casinos and luxurious hotels.

Moorish barbs: a breed of horses introduced by the Moors (Muslim people of mixed Berber and Arab descent) that resemble Arabian horses and are known for their speed and endurance.

placer: a waterborne deposit of gravel or sand containing heavy ore minerals, as gold, which have been eroded from their original bedrock and concentrated as small particles that can be washed out.

puncheon: large timbers with one flattened side, usually used for flooring.

Riff: a member of any of several Berber peoples inhabiting the Er Rif, a hilly region along the coast of northern Morocco. The Berber people of the area remained fiercely independent until they were subdued by French and Spanish forces (1925–1926).

Rualla: the name of an Arab tribe.

Sorbonne: a university in Paris; intellectual center of France.

spahi: a member of a light cavalry regiment of the French Army recruited primarily from Algeria, Tunisia and Morocco.

strut: a support for a structure such as an aircraft wing, roof or bridge.

volplaned: glided toward the earth in an airplane, with no motor power or with the power shut off.

white feather: a single white feather is a symbol of cowardice. It comes from cockfighting, and the belief that a gamecock sporting a white feather in its tail is not a purebred and is likely to be a poor fighter.