Fanner Marston is a man whose greed and lust for power drives him through a blistering desert to the legendary city of Parva, where a secret awaits which will give him absolute control over all the universe.

That is Fanner Marston’s mantra—his reason for being—and while he knows a little about the first and a lot about the second, he may well be on the verge of learning everything there is to know about the third. Power. He may, in fact, be about to uncover the key to gaining absolute control over the entire universe. The only problem is, Fanner is certifiably insane.…

His starship has crash-landed, and he’s the sole survivor, which doesn’t matter to him. Driven by greed and lust for power, wracked by thirst, hunger, and pain, all he cares about is reaching the ancient city of Parva and making himself at home. Because there lies The Great Secret to universal domination—and what’s a little suffering on the road to becoming God?

Does Fanner have a prayer? The writing’s on the walls of Parva—and you won’t believe what it says.…

Also includes the science fiction adventures, “The Space Can,” in which a decrepit space battleship is a civilian fleet’s only defense; “The Beast,” the tale of a hunter in the jungles of Venus, chasing an immoral beast; and “The Slaver,” in which an alien race has enslaved the human race, but can’t repress the power of human love.

“Serves as a wonderful introduction to the breadth of Hubbard’s output.” —Comic Buyers Guide 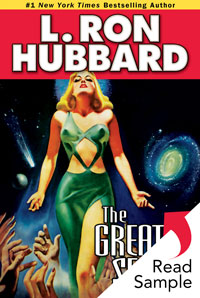 By the spring of 1938, L. Ron Hubbard’s stature as a writer was well established. As author and critic Robert Silverberg puts it: he had become a “master of the art of narrative.” Mr. Hubbard’s editors urged him to apply his gift for succinct characterization, original plot, deft pacing, and imaginative action to genres that were new, and essentially foreign, to him—science fiction and fantasy. The rest is Sci-Fi history.

beck: a gesture of the hand, head, etc., meant to summon.

bos’n: bosun; a petty officer on a merchant ship who supervises the work of other crew.

brutes: animals other than human beings.

dissolution of Gaul: “Pop chose to attempt the dissolution of Gaul in the manufactures of Kentucky” is a play on words, meaning that he tried to drown his bitter feelings in whiskey. The two words are Gaul and gall. Gaul was a territory in western Europe, which was dissolved (brought to an end) militarily by Julius Caesar in the first century BC and eventually became a Roman province. Gall is something bitter or distasteful; bitter feeling. The “manufactures of Kentucky” refers to whiskey produced in Kentucky.

dodger: a screen to provide protection on a ship.

dry washes: dry stream beds, as at the bottom of a canyon.

flagon: a container for beverages, with a handle, narrow neck, spout and sometimes a lid.

haft: the handle of a knife, ax or spear.

hither and thither: in many directions in a disorderly way.

O: used in solemn or poetic language to add earnestness to an appeal.

slaver: a slave ship; a ship for transporting slaves from their native homes to places of bondage.

squelched: made a sucking sound (while walking on soft wet ground).

struck no colors: never surrendered. A variation of the phrase “striking the colors,” which is the universally recognized sign of surrender for ships at battle; the flag is hauled down as a token of submission.

terrier who had no eyes for the size of her rats: terrier is a group of dogs initially bred for hunting and killing vermin, such as rats and small game, both above and under the ground. While usually small, these dogs are known for being brave and tough with a lively, energetic personality. They will tenaciously go after their prey, undeterred by its size, even digging into the ground if needed to reach it. Used figuratively.

thou: archaic form of you.

Venusian: relating to the planet Venus.