The Chinese city of Tientsin is under siege from within—the streets filled with rioting, arson, mass looting, and murder. And all because the city’s sacred idol, the Green God, has gone missing. Bill Mahone of Naval Intelligence is on a mission to find it. But he’s walking a razor’s edge—between worship and warfare, between a touch of heaven and a taste of hell.

Lieutenant Bill Mahone of Naval Intelligence is on a mission to find The Green God … and it’s life or death.

Along the way, he’s tortured with knives, threatened with a slow, painful death, and buried alive. And then things get really nasty. The entire Chinese city of Tientsin is under siege from within—the streets filled with rioting, arson, mass looting, and murder. And all because the city’s sacred idol, the Green God, has gone missing.

Mahone’s convinced he knows who stole the deity of jade, diamonds, and pearls. To retrieve it, though, he’ll have to go undercover and underground. But he’s walking a razor’s edge—between worship and warfare, between a touch of heaven and a taste of bloody hell.

Also includes the adventure “Five Mex for a Million,” in which an American Army captain, falsely accused of murder, finds himself taking on the Chinese government, a powerful Russian general, and a mysterious, unexpected passenger. 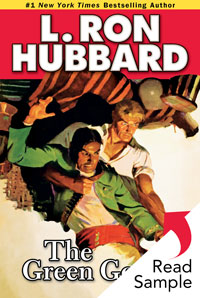 As a young man, L. Ron Hubbard visited Manchuria, where his closest friend headed up British intelligence in northern China. Mr. Hubbard gained a unique insight into the intelligence operations and spy-craft in the region as well as the criminal trade in sacred objects. It was on this experience that he based The Green God, which was his first professional sale, published in February 1934—the beginning of a very remarkable and prolific writing career.

Bund: the word bund means an embankment and “the Bund” refers to a particular stretch of em­banked riverfront along the Huangpu River in Shanghai that is lined with dozens of historical buildings. The Bund lies north of the old walled city of Shanghai. This was initially a British settlement; later the British and American settlements were combined into the International Settlement. A building boom at the end of the nineteenth century and beginning of the twen­tieth century led to the Bund becoming a major financial hub of East Asia.

Horatius: legendary Roman hero. He held an opposing army at bay while the Romans cut down a bridge connecting Rome with the road westward, thus preventing the enemy from crossing.

hutung: (Chinese) a lane or alley.

International Settlement: a reserved area in China set aside by the government where foreigners were permitted to reside and trade. These areas, called settlements or concessions, were leased from the Chinese government and were administered by the foreign residents and their consuls and not under the jurisdiction of Chinese laws or taxes. All such foreign settlements on mainland China were eventually dismantled when the Communist Party of China took control of the government in 1949.

Mex: Mexican peso; in 1732 it was introduced as a trade coin with China and was so popular that China became one of its principal consumers. Mexico minted and exported pesos to China un­til 1949. It was issued as both coins and paper money.

Morrison Street: street in Peking named after Australian George Morrison (1862–1920), a jour­nalist and political advisor to the Chinese government. The street was the center for commer­cial activities.

Native Quarter: Native City; walled portion of the city where the native Chinese resided, also re­ferred to as the Walled City. Foreigners in Tientsin lived in the International Settlement, lo­cated outside the Native City.

Outer Mongolia: originally the northern section of Mongolia, it was a political division of the Beiyang (warlord) Government, a series of military regimes that ruled from Peking from 1912 to 1928. Today the name is sometimes still informally used referring to Mongolia, a sovereign state, which controls roughly the same territory.

phaeton: a vintage car body style, similar to a sedan or convertible sedan, where the rear-seat area is extended for added leg room, giving the vehicle the appearance that it is meant to be chauf­feur-operated. This body type was popular up to the early years of World War II.

pitch torch: a torch that was made by pounding a stick to loosen the fibers and then covering it with melted pitch until it was thoroughly soaked. When the pitch was hardened, another layer was spread thickly over it. This made a torch that burned brightly for many hours.

Route Army: a type of military organization exercising command over a large number of divi­sions. It was a common formation in China but was discarded after 1938.

slew: to turn about an axis; pivot.

Taku: site of forts built in the 1500s to defend Tientsin against foreign invasion. The forts are lo­cated by the Hai River, 37 miles (60 km) southeast of Tientsin.

tiger whiskers: whiskers from a tiger used in traditional remedies believed to cure ailments rang­ing from toothache to epilepsy; sold in markets in China.

Tom and Jerry glass: a thick glass for a hot drink called “Tom and Jerry,” containing rum, brandy, nutmeg and egg, to which milk is sometimes added.

Uliassutai: at the time of the story, Outer Mongolia was divided into two administrative divisions: Uliassutai, which housed a military governor controlling the western division, and Urga, which housed the Chinese imperial agent who ruled the eastern division. Today, Urga (now known as Ulan Bator) is the capital of Mongolia.

Valkyrie: (Norse mythology) one of the twelve handmaids of Odin (god of war, poetry, knowledge and wisdom) who ride their horses over the field of battle and escort the souls of slain heroes to Valhalla.