The city of Nencheng is in flames, China’s only hope against the Japanese falls from the sky—their ace fighter pilot, Bill Gaylord, “The Falcon Killer.” He parachutes into the arms of the one woman who gives him a reason to live—and rejoin the fight against Japan.

The Japanese military has turned the once-thriving Chinese city of Nencheng into a reeking pile of blood and ash. And now the Japanese Rising Sun threatens to scorch the ancient—and oil-rich—Kingdom of the Silver Lake. Can the Chinese survive the onslaught? Do they have a prayer?

The answer is about to fall out of the sky. He is The Falcon Killer. China’s ace fighter pilot and the scourge of the Japanese air force, he is in fact Bill Gaylord, an American orphaned and self-reliant—a man without a country and without fear.

Shot down over Nencheng, Gaylord parachutes into the arms of the one woman who can give him a reason to live and to rejoin the fight against Japan—as he squares off against their top spy. His prey is in his sights, and catching it will change everything … for The Falcon Killer. 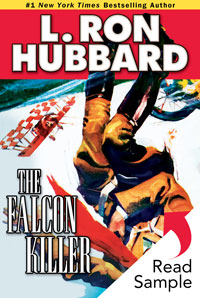 As a young man, L. Ron Hubbard visited Manchuria, where his closest friend headed up British intelligence in northern China. Mr. Hubbard gained a unique insight into the intelligence operations and spy-craft in the region as well as the hostile political climate between China and Japan—a knowledge that informs stories like The Falcon Killer.

ablutions: actions of washing or cleansing of the body.

Boxer Uprising: Boxer Rebellion; an unsuccessful rebellion in China from November 1899 to September 1901. The objective was to drive out all foreigners, remove all foreign influence and compel Chinese Christians to give up their religion. Boxer means “The Fist of Righteous Harmony” and was the name for members of a secret society that launched the Boxer Rebellion. Their symbol was a clenched fist.

bravo: a hired soldier. The term comes from the Italian word for brave and was first applied to hired assassins retained by noble houses of Italy.

Chang Tso-lin: (1873–1928) one of the major warlords of China in the early twentieth century. He was the warlord of Manchuria from 1916 to 1928 and at one time ruled an enormous area of north China.

Chiang: Chiang Kai-shek (1887–1975); military leader of the Chinese Nationalist Party that attempted to purge Communism from China and unite the country under one central government. Civil war broke out in 1927 between the Nationalist government and the Red Army led by Mao Tse-tung. China was also involved in intermittent conflicts with Japan since 1931, with full-scale war breaking out in 1937. In 1949, the Nationalist government’s power declined and Communist control ensued, forcing the Nationalists from mainland China into Taiwan.

compass card: a freely pivoting circular disk carrying the magnetic needles of a compass and marked with the 32 points of the compass, the 360 degrees of the circle.

convict arrow: the symbol of a broad arrow used by the British to identify property of the government and probably best known for its use on convicts’ uniforms.

foils: airfoils; any surfaces (such as wings, propeller blades or rudders) designed to aid in lifting, directing or controlling an aircraft by using the current of air it moves through.

hogsheads: large barrels or casks, each with a capacity ranging from 63 to 140 gallons.

Mills bombs: oval hand grenades, named after the English engineer Sir William Mills. The grenade was pineapple-style with an explosive core around which was wrapped a thick, knobbly metal case. When the bomb exploded the force of the explosion blew the case apart, sending shrapnel in all directions. Fighter squadrons carried Mills bombs into battle and manually threw them overboard.

Mitsubi: a type of machine gun made by Mitsubishi, a Japanese aircraft manufacturer in the 1930s, known for its bombers and fighter planes.

pigsticker: one who hunts for wild boar, usually on horseback and using a spear.

portières: curtains hung in doorways, either to replace the doors or for decoration.

Scourge of Mankind: Genghis Khan; Mongol warrior of the thirteenth century who led a constant military campaign for three decades that ravaged vast areas and subjugated millions of people, earning him a reputation in the history books as a brutal monster. His empire, which included parts of China, Central Asia, the Middle East and Europe, lasted more than 150 years after his death.

Tartars: members of any of the various tribes, chiefly Mongolian and Turkish, who, originally under the leadership of Genghis Khan, overran Asia and much of eastern Europe in the Middle Ages. Also the descendants of these people.