Lieutenant Lee Briscoe locks horns with the sadistic master of a slave-labor island in the Celebes Sea. Complicating Lee’s plans is a gorgeous young woman who’s been bargained off to the same island lord.

Brash and bold and daring, Lieutenant Lee Briscoe will never back away from a good cause or a good fight.

Briscoe’s gone undercover to infiltrate a slave-labor camp on an island in Southeast Asia, knowing full well that once he goes in, he may never get out. Posing as a man on the run for murder, he may soon wish he had run in the opposite direction. His adversary on the island is Schwenk—a man who is not only a connoisseur of cruelty but an expert at delivering it.

And for Briscoe, the stakes have just shot up. An innocent young woman has landed on the island and fallen into Schwenk’s clutches, sold to him to do with her as he pleases. Escape is the only option … or both Briscoe and the girl are sure to face a fate worse than death. 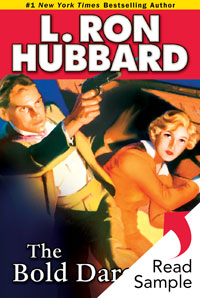 L. Ron Hubbard once wrote in his journal: “There must be wide spaces in which to think, strange music to hear, odd costumes to see and the elements to battle against. Money, nice cars, good food, and a ‘good job’ mean nothing to me when compared to being able to possess the thought that there is a surprise over the horizon.” Venturing toward that horizon, at age seventeen Ron set sail for the South Pacific in July 1927, and after spending time getting to know the local natives, he signed aboard a working schooner bound for China’s coast. Along the way, Ron encountered many dangers lurking in the thick jungle mists—firsthand experience that contributed to stories like The Bold Dare All.

The Bold Dare All Glossary

blackbird: to kidnap South Sea Islanders (Australian descendants from the more than eighty islands in the western Pacific) for use or sale as laborers.

bone: bone in the teeth; said of a ship speeding along sending up spray or foam under the bow. The phrase comes from the image of a dog, merrily running with a bone in its teeth.

bower of swords: the arch, or simulated shelter, formed by swords held by military personnel for the bride and groom to walk under as they exit the church.

campaigner: campaign hat; a felt hat with a broad stiff brim and four dents in the crown, formerly worn by personnel in the US Army and Marine Corps.

Celebes Sea: a section of the western Pacific Ocean between the Indonesian island of Sulawesi (formerly known as Celebes), Borneo and the southern Philippines.

¿De donde viene el caballo?: (Spanish) Where is the horse from?

Enfield rifle: any of several rifles formerly used by British and American troops, especially the .30- or .303-caliber, bolt-action, breech-loading model.

give way: begin to row.

grease: bribe or protection money; money given for corrupt purposes.

guilders: Dutch coins. Guilder means golden in Dutch. The guilder originated as a gold coin (hence the name) but has been a common name for a coin of silver or other metal for some centuries.

Herr: (German) Mister, used as a title before a surname or profession.

Iron Cross of the First Class: a military decoration of the Kingdom of Prussia, and later of Germany, first awarded in 1813. The Iron Cross was awarded for bravery in battle, as well as for other military contributions in a battlefield environment. The Iron Cross First Class was a pin-on medal with no ribbon and was worn centered on a uniform breast pocket. It was a progressive award, with second class having to be earned before the first class and so on for the various degrees.

longboat: the longest boat carried by a sailing ship.

monkey fists: ball-like knots used as ornaments or as throwing weights at the ends of lines.

pipe-clayed: made clean and smart; pipe clay is a fine white clay used in whitening leather. It was at one time largely used by soldiers for making their gloves, accouterments and clothes look clean and smart.

Prussian: a native or inhabitant of Prussia. Prussia, a former northern European nation, based much of its rule on armed might, stressing rigid military discipline and maintaining one of the most strictly drilled armies in the world.

puttee: a covering for the lower part of the leg from the ankle to the knee, consisting of a long narrow piece of cloth wound tightly and spirally round the leg, and serving both as a support and protection. It was once adopted as part of the uniform of foot and mounted soldiers in several armies.

scupper: an opening in the side of a ship at deck level that allows water to run off.

Sulu Archipelago: island group in the Philippines lying between the Celebes and Sulu Seas. It includes over 900 volcanic islands and coral islets extending almost to Borneo.

Tawan: now Tawau; British-controlled town on the coast of Borneo facing the Celebes Sea. In the early nineteenth century, the British and Dutch governments signed a treaty to exchange trading ports that also divided Borneo into British- and Dutch-controlled areas.

.38 Colt: a .38-caliber revolver manufactured by the Colt Firearms Company, founded in 1847 by Samuel Colt (1814–1862) who revolutionized the firearms industry with the invention of the revolver.

top kick: a first sergeant, the senior enlisted grade authorized in a company.