Bob Sherman signs on the crew of the yacht Bonito with hopes of revenge. And he’ll need every ounce of his strength to overcome the forces arrayed against him now—hurricanes, corruption, pirates … and the man who stole everything he valued in life. But as he’s about to discover, there’s one force more powerful and dangerous than the sea itself … the force of a beautiful woman’s love.

Bob Sherman signs on the crew of the yacht Bonito with hopes of revenge, and he’ll need every ounce of his strength and courage to overcome the forces arrayed against him—in Sea Fangs.

He’ll take on the forces of nature—a hurricane smashing into the boat off the Venezuelan coast. He’ll stand up to the forces of ignorance— Bonito‘s incompetent captain. He’ll defy the forces of corruption—the boat’s owner, who stripped him of his land years ago. And he’ll fight the forces of evil—a ruthless band of pirates who take all aboard, including the owner’s daughter, to the uncharted Island of Death.

His fate intertwined with a woman whose father stole everything he valued, Sherman is about to discover that there’s one force as powerful, unpredictable, and dangerous as the sea itself … the force of a beautiful woman’s love.

“The cast brings alive romance, bravado, menace, and the thrill of escape.” —AudioFile

* Winner of AudioFile’s Best Audiobook for 2011 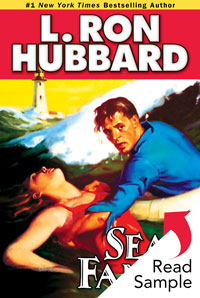 L. Ron Hubbard had vast experience at sea. By the time he’d written this story, he had traveled twice to China on naval vessels, had signed on a twin-masted schooner plying the Chinese coast, and had organized a five-thousand-mile expedition aboard a four-masted schooner. He had first-hand experience of the violence of the sea—and of the men who ply it—as he depicts in Sea Fangs.

black gang: ship’s crew that works in the engine room aboard a ship. They were called black be­cause of the soot and coal dust that was thick in the air in the fire room/engine room.

Black Terror: a reference to Sir Henry Morgan (1635?–1688), known as the King of the Bucca­neers and terror of the Spanish Main. Morgan was one of the most ruthless of pirates; his dar­ing, brutality and intelligence made him the most feared, and respected, buccaneer by his friends and enemies alike.

capstan: a device used on a ship that consists of an upright, rotatable cylinder around which ropes, chains or cables are wound, either by hand or machine, for hoisting anchors, lifting weights, etc.

Cartagena: a seaport in northern Colombia.

flying bridge: a small, often open deck or platform above the pilothouse or main cabin, having du­plicate controls and navigational equipment.

gaff: a pole rising aft from a mast to support the top of a sail.

Lucas reel: the brand name of a machine used for sounding or measuring the depth of an area of water.

Morgan: Sir Henry Morgan (1635?–1688), a Welsh buccaneer in the Americas. His brutal hostil­ities against the Spanish colonies in the Caribbean are known for their skillful execution, at times, against great odds. An exaggerated account of his exploits, written by one of his crew, created his popular reputation as a bloodthirsty pirate.

one-pound gun or one-pounder: a gun firing a one-pound shot or shell. It looks somewhat like a miniature cannon.

packet: packet-boat; originally a vessel that carried mail, passengers and goods regularly on a fixed route.

Point Gallinas: a cape in northeastern Colombia at the northernmost point of South America.

postern: a small gate or entrance at the back of a building, especially a castle or a fort.

scapula: a surgical knife with a broad wedge-shaped cutting edge.

ship’s articles: the contract containing all particulars relating to the terms of agreement between the captain of the vessel and a crew member in respect to wages, length of time for which they are shipping, etc., signed prior to and upon termination of a voyage.

sprit: bowsprit; a spar projecting from the upper end of the bow of a sailing vessel, for holding and supporting a sail.

stem: the forwardmost part of the bow.

telegraph: an apparatus, usually mechanical, for transmitting and receiving orders between the bridge of a ship and the engine room or some other part of the engineering department.