The Chinese city of Shunkien is under siege by the Japanese. In the middle sits the American consulate packed with refugees facing starvation and cholera. Marine Gunnery Sergeant James Mitchell is their only hope. But he’ll have to negotiate 200 miles of bullets, bombs, and one bombshell dancer to get there.

The doomed Chinese city of Shunkien was being systematically destroyed. Japan’s war machine was pounding wreckage into ashes—wiping out a city that had thrived since the time of Genghis Khan.

One of the few buildings still standing is the American consulate where one hundred and sixteen US refugees are facing almost certain death, either from high explosives, the ravages of starvation, or Asiatic cholera.

Unbeknownst to the refugees, their fate rests in the hands of one Marine—Gunnery Sergeant James Mitchell—and his ability to negotiate two hundred miles of occupied territory in order to bring desperately needed gold and medicine, while overcoming bullets, dive bombers, butchery, and his own personal nemesis—alcohol.

Add to these seemingly insurmountable odds, a seductive American fan-dancer who hitches along for the ride and saving the lives of the hostages is far from a fait accompli.

“Demonstrating his unique ability to relate even to the most complicated story with a keen eye for detail and realism, Hubbard’s stunning writing ability and creative imagination set him apart as one of the greatest literary figures of the 20th century.” —Publishers Weekly 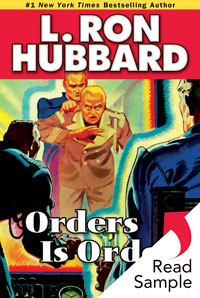 As a young man, L. Ron Hubbard visited Manchuria, where his closest friend headed up British intelligence in northern China. Mr. Hubbard gained a unique insight into the hostile political climate between China and Japan—a knowledge that informs stories like Orders Is Orders. In addition, he served as a First Sergeant with the 20th United States Marine Corps Reserve—giving him first-hand knowledge of what it means to be a Marine.

adagio dancers: performers of a slow dance sequence of well-controlled graceful movements including lifting, balancing and turning, performed as a display of skill.

Adonis: an extremely handsome young man; originating from the name of a beautiful youth in Greek mythology.

Atlantic Fleet: the part of the Navy responsible for operations in and around the Atlantic Ocean. Originally formed in 1906, it has been an integral part of the defense of the US for most of the twentieth century.

bobtail: to curtail or reduce, as in rank.

boot: a Marine or Navy recruit in basic training.

brigand: one who lives by plunder; a bandit.

Browning, 1917: a light machine gun weighing fifteen pounds. It looks like and can be fired like an ordinary rifle, either from the shoulder or the hip. It was invented by John M. Browning (1855–1926), an American firearms designer.

bug: a high-speed telegrapher’s key that makes repeated dots or dashes automatically and saves motion of the operator’s hand.

casqued: having a military headpiece or helmet on.

cat’s: cat’s pajamas; cat’s meow; someone or something wonderful or remarkable.

Château-Thierry: a town of northern France on the Marne River, east-northeast of Paris. It was the site of the second Battle of the Marne (June 3–4, 1918), which ended the last major German offensive in World War I.

cholera: an infectious disease of the small intestine, typically contracted from infected water.

Clydes: Clydesdale; one of a Scottish breed of strong, hardy draft horses, having a feathering of long hairs along the backs of the legs, so called because they were bred in the valley of the Clyde in Scotland.

cork off: go to bed; sleep.

dixie: a mess tin or oval pot often used in camp for cooking or boiling (as tea).

Doko e yuku!: (Japanese) Where are you going!

embrasures: (in fortification) openings, as a loophole through which missiles may be discharged.

golden guinea: a British coin worth twenty-one shillings (a shilling is one-twentieth of a pound).

Hell to Halifax: a variation of the phrase “from here to Halifax,” meaning everywhere, in all places no matter how far from here. “Halifax” is a county in eastern Canada, on the Atlantic Ocean.

howitzers: cannons that have comparatively short barrels, used especially for firing shells at a high angle of elevation for a short range, as for reaching a target behind cover or in a trench.

Kawasaki KDA-5: a fighter biplane built by Kawasaki, a Japanese aircraft manufacturer founded in 1918. The first prototype flew in 1932; 380 of these planes were built.

leatherneck: a member of the US Marine Corps. The phrase comes from the early days of the Marine Corps when enlisted men were given strips of leather to wear around their necks. The popular concept was that the leather protected the neck from a saber slash, though it was actually used to keep the Marines from slouching in uniform by forcing them to keep their heads up.

Legation: the official headquarters of a diplomatic minister.

men-o’-war: armed ships of a national navy usually carrying between twenty and one hundred and twenty guns.

Native Quarter: also Native City; deep in the center of Peking, far from the ordinary people, was the Forbidden City, where the Emperor resided and carried out the affairs of state. It was spread out over a large area with audience halls, libraries and theaters, all reserved solely for the emperor. Surrounding this area was the Imperial City, with granaries, temples, residences for high officials and workshops of artisans who provided services and goods for the imperial household. Circling that was the Tartar City, occupied by the military men; and to the south was the Native City, where the Chinese resided. Each of these cities within cities had its own walls, which were clearly organized and defined the status of its residents.

Nic: Nicaragua; from 1927 until 1933 there was guerrilla warfare against the Nicaraguan government and the US Marines that were sent to defend US interests.

Old Glory: a common nickname for the flag of the US, bestowed by William Driver (1803–1886), an early nineteenth-century American sea captain. Given the flag as a gift, he hung it from his ship’s mast and hailed it as “Old Glory” when he left harbor for a trip around the world (1831– 1832) as commander of a whaling vessel. Old Glory served as the ship’s official flag throughout the voyage.

Portsmouth: US Naval and Marine prison located in Maine and occupied from 1908 until 1974.

powder, took a: made a speedy departure; ran away.

radio: a radio message; a radiogram.

scuppers are under: when a ship is too heavily loaded that its scuppers (openings in the side of a ship at deck level that allow water to run off) are under water. Used figuratively.

Shantung: the dialect spoken in Shantung, a peninsula in east China extending into the Yellow Sea.

shin the chains: leave the ship without permission.

slip cable: to leave a place; part company. From the nautical phrase “to slip cable” which means to let go of the anchor cable (let it slip off the ship) when a quick departure is needed and time cannot be spared to raise the anchor.

swagger coat: a woman’s pyramid-shaped coat with a full flared back and usually raglan sleeves (sleeves extending to the collar of a garment instead of ending at the shoulder), first popularized in the 1930s.

three sheets to the wind: in a disordered state caused by drinking; intoxicated. This expression is generally thought to refer to the sheet (a rope or chain) that holds one or both lower corners of a sail. If the sheet is allowed to go slack in the wind, the sail flaps about and the boat is tossed about much as a drunk staggers. Having three sheets loose would presumably make the situation all the worse.

tin can: an improvised hand grenade, made by filling tin cans with bits of iron and a high explosive in which a fuse cord was inserted. The cord was lighted and the can with the sputtering fuse was thrown into the enemy lines.

toesmithing: among people of the theater, a term for dancing.

tonneau: the rear seating compartment of an automobile.

trick: a period or turn of duty.

“white man’s burden”: from a poem written by Rudyard Kipling originally published in 1899 with regard to the US conquest of the Philippines and other former Spanish colonies. Subject to different interpretations, it was latched onto by imperialists to justify colonialism as a noble enterprise. Much of Kipling’s other writings suggested that he genuinely believed in the benevolent role that the introduction of Western ideas could play in lifting non-Western peoples out of “poverty and ignorance.”

whitewash: a white liquid that is a mixture of lime or powdered chalk and water, used for making walls or ceilings white.