Loot of the Shanung trade paperback

Ace reporter Jimmy Vance is hired by the beautiful Virginia Rockham to find her missing father, billionaire oil magnate George Harley Rockham. It could be the biggest story of his life … if he lives to tell it.

Stop the presses! One hundred thousand dollar reward offered for the return of George Harley Rockham!

That’s more than enough to turn Shanghai newspaperman Jimmy Vance’s head. Throw in the gorgeous dame who’s offering the reward—Rockham’s daughter Virginia—and he might lose his head altogether. Fast-talking Vance jumps at the chance … the money … and the girl.

But as Jimmy quickly discovers, there are several billion reasons to watch his back. Because that’s how much Rockham is worth, and there are some very hard cases out there willing to kill to separate the old man from his money.

Next thing Jimmy knows, Virginia’s tied to a chair, and he’s got a couple of guns pointed at his head. But it’ll take more than a little rope and a couple of firearms to keep this reporter down. The truth is tied to the mysterious fate of a steamship named Shanung—and what Jimmy finds could be the biggest story of his life … if he lives to tell it. 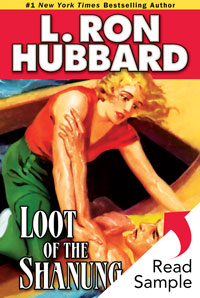 In the issue of Smashing Novels where this story first appeared the editor wrote: “Loot of the Shanung is a soul-stirring tale of the China Sea, a story of modern piracy set in the Far East. L. Ron Hubbard wrote it. He knows China. He has been there. He traveled through the country and met the people and observed their customs. Smashing Novels will have other stories from him—stories of far-off places and little-known people. He knows of what he writes.”

Loot of the Shanung Glossary

bearder: one who boldly confronts or challenges (someone formidable).

Bias Bay: body of water off the coast of China, fifty miles northeast of Hong Kong, and notorious as a base of operations for Chinese pirates.

bow chasers: a pair of long guns mounted forward in the bow of a sailing warship to fire directly ahead; used when chasing an enemy to shoot away her sails and rigging.

bow eyes: eyes painted on either side of the bow of a ship. The term comes from the ancient custom of painting eyes on the bow so that the ship could see where she was going.

bridge wings: narrow walkways extending outward from both sides of a pilothouse to the full width of a ship.

broadside: all the guns that can be fired from one side of a warship or their simultaneous fire in naval warfare.

Canton: city and port in the southern part of China, northwest of Hong Kong.

Chinwangtao: port city of northwest China on the Bo Hai Sea, an inlet of the Yellow Sea, 186 miles (300 km) east of Beijing. It was formerly a treaty port where foreign trade was allowed.

cleats: pieces of metal or wood having projecting arms or ends on which a rope can be wound or secured.

cockpit: a cabin on the lower deck of a man-o’-war where the wounded in battle were tended.

Cossack jacket: cherkeska; a military coatlike garment with silver cartridges lined across the chest. The cartridges are a reminder of the times when the Cossacks were armed with muzzle-loading guns. At that time, each cartridge contained enough gunpowder for one shot. When breech-loading weapons came into use, the holders were retained as part of the costume.

crosstrees: a pair of horizontal rods attached to a sailing ship’s mast to spread the rigging, especially at the head of a topmast.

Davy Jones’ locker: the ocean’s bottom, especially when regarded as the grave of all who perish at sea.

dead to rights: in the very act of committing a crime, offense or mistake; red-handed.

dodger: a canvas or wood screen to provide protection from ocean spray on a ship.

fills: copy used primarily to fill extra space in a column or page of a newspaper or periodical, especially a brief item of fact as from a reference book.

forecastle head: the extreme fore part of the upper deck of a sailing ship, forward of the foremast.

foredeck: the part of a ship’s deck between the bridge and the forecastle (the upper deck of a sailing ship, forward of the foremast).

founder: to sink below the surface of the water.

fulminate: fulminate of mercury; a gray crystalline powder that when dry explodes under percussion or heat and is used in detonators and as a high explosive.

gaff: a pole rising aft from a mast to support the top of a sail.

galleon: a large three-masted sailing ship, usually with two or more decks; used mainly by the Spanish from the fifteenth to eighteenth centuries for war and commerce.

gun captain: a petty officer in command of a gun crew on a ship.

hawsers: cables or ropes used in mooring or towing ships.

heave to: to bring a ship to a stop.

horse pistol: a single-shot .58-caliber handgun created in 1805, resembling a short-barreled rifle. The gun was designed to be carried in a holster on the side of a horse, and was known as a hard-hitting and powerful weapon.

hull down: sufficiently far away, or below the horizon, that the hull is invisible.

junk: a seagoing ship with a traditional Chinese design and used primarily in Chinese waters. Junks have square sails spread by battens (long flat wooden strips for strengthening a sail), a high stern and usually a flat bottom.

Kowloon: a city of southeastern China on Kowloon Peninsula opposite Hong Kong Island.

lazarette: a small storeroom within the hull of a ship, especially one at the extreme stern.

Manchukuo: a former state of eastern Asia in Manchuria and eastern Inner Mongolia. In 1932 it was established as a puppet state (a country that is nominally independent, but in reality is under the control of another power) after the Japanese invaded Manchuria in 1931. It was returned to the Chinese government in 1945.

military brushes: a pair of matched hairbrushes having no handles, especially for men.

morning coat: a man’s single-breasted coat. The front parts usually meet at one button in the middle, and gently curve away into a pair of tails behind. The coat can be gray or black and is usually worn with striped trousers. The name derives from the fact that a common form of morning exercise for gentlemen in the nineteenth century was horseback riding, and because of this it was regarded as a more casual way of dress.

powder monkeys: boys employed on warships to carry gunpowder from the magazine to the guns.

press ganging: forcing (a person) into military or naval service.

ratline: a small rope fastened horizontally between the shrouds in the rigging of a sailing ship to form a rung of a ladder for the crew going aloft.

sculling oar: a single oar that is moved from side to side, at the stern of a boat, to propel it forward.

Seven Great Sea Oaths: an abundance of profanities or swearwords. The Seven Great Seas is in reference to the many seas of the world.

Seventh Hell: according to the Moslems, hell is divided into seven stories or cellars, the lowest being the seventh.

Shantung: a peninsula in east China extending into the Yellow Sea.

spars: strong poles, especially those used as masts to support the sails on ships.

spat: a piece of cloth or leather covering the ankle and part of the shoe, and fastened on the side of the shoe. Spats are worn by men.

steerageway: the minimum rate of motion sufficient to make a ship or boat respond to movements of the rudder.

.38 Colt: a .38-caliber automatic handgun manufactured by the Colt Firearms Company, founded in 1847 by Samuel Colt (1814–1862) who revolutionized the firearms industry with his inventions.

thole: a holder attached to the gunwale of a boat that holds the oar in place, and acts as a fulcrum for rowing.

tiffin: a meal at midday; a luncheon.

waist: the central part of a ship.

Who’s Who: a reference book or reference serial providing brief biographical information about well-known people who are still living.

Yangtze: the longest river in Asia and the third longest in the world, after the Nile in Africa and the Amazon in South America.