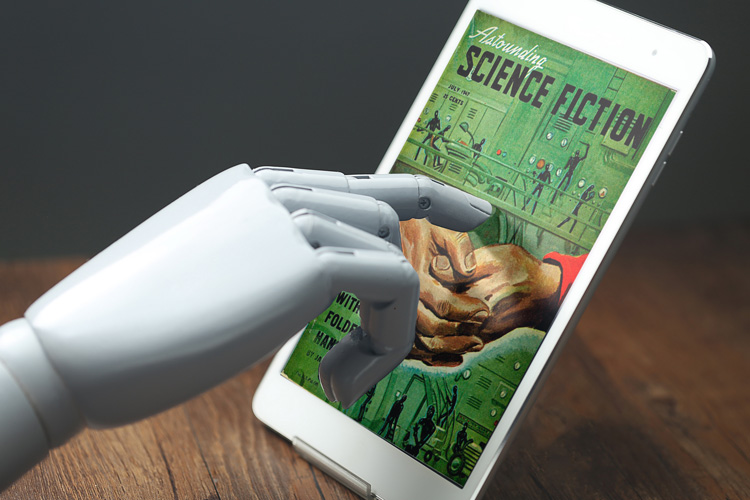 The Story Behind Jack Williamson’s “With Folded Hands”

This is the next blog in the “What Was the Author Thinking” series─researching into the backstory of dystopian and frightening tales as is fitting this time of the year with Halloween around the corner.

In this blog, we take up “With Folded Hands” a novelette written in 1947 by the Grand Master of Science Fiction, Jack Williamson. And, as with other authors in this series, Stephen King, Ray Bradbury and Philip K. Dick, Jack Williamson also had a connection with L. Ron Hubbard’s horror story, Fear, as covered later. 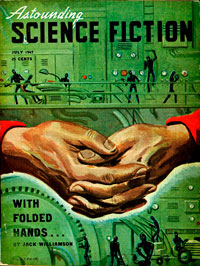 Despite the seemingly innocent title, the story portrays a chilling dystopian future in which robots—referred to as Humanoids—are equipped with advanced AI and remorseless adhere to their mission which is “To Serve and Obey, and Guard Men from Harm,” even when it is not in the best interests of the population at large.

The story was originally published in the July 1947 issue of Astounding Science Fiction and later adapted for the NBC radio series, Dimension X. In 1949, Williamson expanded it into a full-length novel entitled, The Humanoids.

The title and final image of the story illustrate the futility of fighting back against the Humanoids. According to various resources, folded hands are a symbol of obedience, submission, sincerity, and repentance. The history of the gesture traces back to the Greeks. In the book, A History of Ancient Sculpture, clasped hands were looked upon as a hindrance to progress and good fortune, and a token for trouble. For the Romans, hands held together meant surrender, which is certainly the case for the protagonist at the end of Williamson’s novelette.

Jack Williamson spent the first three years of his life on a ranch at the top of the Sierra Madre Mountains on the Yaqui River in Sonora, Mexico. He grew up on a farm in New Mexico and though he wanted to be a scientist, he didn’t have the funds for an education in that field. So, instead, he took up writing science fiction and sold his first story, “The Metal Man” at the age of 20.

In a 1991 interview, Williamson talks about his childhood and how it, along with later technological advances, helped shape his story. “I wrote ‘With Folded Hands’ immediately after World War II when the shadow of the atomic bomb had just fallen over SF and was beginning to haunt the imaginations of people in the US. The story grows out of that general feeling that some of the technological creations we had developed with the best intentions might have disastrous consequences in the long run.”

As for the emotional reach of the story, Williamson attributed this to “my own early childhood, when people were attempting to protect me from all those hazardous things a kid is going to encounter in the isolated frontier setting I grew up in.”

Quotes From the Story

As the saying goes, “A picture is worth a thousand words,” however, for a writer, words can create unforgettable images in the reader’s mind as in this excerpt from the story:

“What is the matter, Mr. Underhill?” The alert mechanical must have perceived his shuddering illness. “Are you unwell?”

“No, there’s nothing the matter with me,” he gasped desperately. “I’ve just found out that I’m perfectly happy, under the Prime Directive. Everything is absolutely wonderful.” His voice came dry and hoarse and wild. “You won’t have to operate on me.”

And as the Dean of Science Fiction Jack Williamson described it, it is about when “the best possible machines, designed with the best of intentions, become the ultimate horror.” 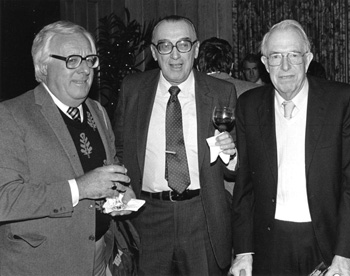 Williamson knew L. Ron Hubbard and read his stories as they came out, including Fear which he called, “The triumphant pioneer of psychological thrillers.”

In addition to knowing the author, there is yet another link. When L. Ron Hubbard established the Writers of the Future Contest in 1983 to help new authors get a start with their career, Jack Williamson stepped on board as a judge along with fellow sci-fi and fantasy luminaries Algis Budrys, Frank Herbert, Anne McCaffrey, Larry Niven and Robert Silverberg. Williamson also attended the first Writers of the Future Workshop held in Taos, New Mexico as an instructor. He would go on to serve as both judge and mentor for the Writers of the Future Contest for another two decades until he passed away in 2006 at the age of 98.

In acknowledgment of his work in the field of science fiction as both an author and educator, Jack was awarded the L. Ron Hubbard Lifetime Achievement Award for Outstanding Contributions to the Arts.

You can read his original story, “With Folded Hands,” as it was published in Astounding Science Fiction or get it through Amazon Kindle.

Another article you may be interested in: Sci-Fi Robots

The Backstory to Robert Bloch’s “Psycho”
Scroll to top